Like Meimei and Take-chan on SS1422, Chii and Kumai-san begin by talking about the Respect for the Aged Day. Kumai-san says she hasn’t gotten to see her grandparents a lot recently so she’s thinking about shooting them an email on this occasion. She says her grandpa is using a lot of emoticons in his emails as of late, and he tends to pick the really cute ones: it won’t be just a single “♪”, but more like two or three, etc.

Chii visited her grandparents the other day and they treated her to a meal. They have a teppanyaki grill at home and instead of eating themselves, they just kept bringing Chii more and more delicious meat for her to have which once again made her realize just how kind they are. Kumai-san says they must find their granddaughter adorable, and Chii says she is really thankful. As one way of showing her gratitude, Chii always waves to them in their 2nd floor seats when they’ve come over to see Berryz in concert, and her grandma will respond by excitedly waving both her hands at her.

Chii notes that a year ago they were extremely busy doing the “Warera Jeanne” musical — they’d be practicing from 10 in the morning until 9 in the evening. Kumai-san adds that because they were practicing below ground they didn’t even know how it looked outside which made it even tougher. Chii says that they were so busy, she doesn’t have many memories of that time period: it was an endless repetition of sleep, practice, sleep, practice, sleep… with the occasional radio appearance.

Topic #1: First off, Chii reports the important piece of news that she finally bought a pair of running shoes! Kumai-san claps and congratulates her for this achievement. The bad news is, it’s been a week now and Chii still hasn’t gone running — the shoes are still sitting in their box. Chii nevertheless promises to start her new hobby soon what with the Naruchika tour approaching and all.

Topic #2: Chii says that this next happening made her further realize the greatness of Berryz Koubou. Around a week or two before when they were in Hokkaido for Hello!Con, the manager informed the members that they had the Sapporo-specialty yakitoukibi corn available for those who wanted some. 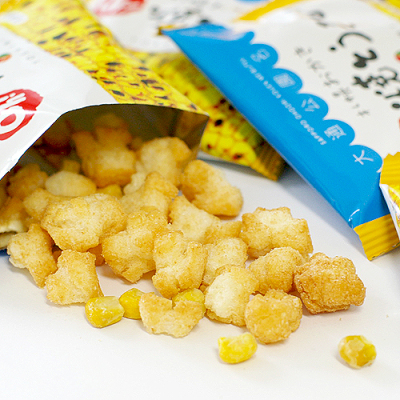 Berryz Koubou and °C-ute shared the same dressing room, so when the manager told them about the yakitoukibi, the two groups split into two almost perfectly: everyone from Berryz (save Captain) immediately said they wanted some, whereas none of the members of °C-ute wanted any. This made Chii think about how °C-ute has an image of never eating anything, and Kumai-san says she’s noticed this, too: when they go out for breakfast for example, °C-ute hardly eats anything. Chii says this is just something that made her once again think about how great Berryz is. Kumai-san agrees: “eating a lot is indeed a good thing.“

The next day, Berryz Koubou had another event in Sapporo and after their morning rehearsal they went out to a restaurant to have lunch together. They ordered some crab sashimi, but the problem was that they received a crab with only six feet. Since Berryz has seven members, they were obviously in quite a quandary. What followed, Chii says, was the fiercest battle of rock-paper-scissors Berryz Koubou has had in the 13 years ever since they first met. The atmosphere in the room changed and Kumai-san says it was quite frightening indeed. Luckily for them, though, they were the first two to win and in the end, Miya and Risako had to share a crab leg by the two of them. 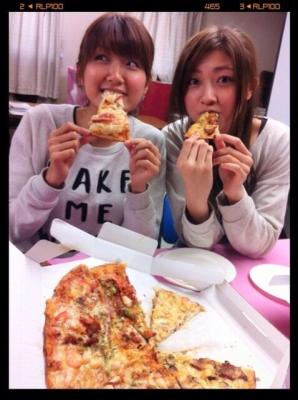 Fan mail #1: The listener says they appreciate the gyaru impression Kumai-san does on the show every now and then, and asks if it would be possible for her to do a full 30-minute show while doing this impression.

Kumai-san say that her doing so would definitely result in something not fit for broadcast. Chii talks about how Kumai-san has mentioned building a wider variety of characters for herself to portray, and asks her how doing “gyaru Kuma-chan” compares to doing her other character “DJ Yurina.” Kumai-san says the the former is actually easier for her to do — doing DJ Yurina takes a physical toll on her.

Kumai-san promises to come up with more characters soon.

Fan mail #2: This listener’s question is all about fighting. Since the members of Berryz all have siblings, the listener asks if they ever have (or used to have) any sibling quarrels. The listener also mentions the well-known stories of how Berryz used to fight a lot when they were still kids and wonders how things are on that front these days.

This made Chii angry, too. “Why not just turn it back on then?!“, she yelled. This made her sister so mad, she switched off the circuit breaker for the entire house. This obviously didn’t help in cooling down the fight at all. Her sister was just in the middle of making a salad with some olive oil, so when Chii pushed her and yelled “turn the circuit back on!“, it caused her sister to drop the olive oil, making a huge, slippery mess on the floor. Later on, their mom was really angry at them both.

Kumai-san laughs and says their fight sounds pretty serious. When their fights get physical, Chii says her sister always wins; she figures her sister took it easy on her this time, and this is a sign to her that her sister has grown up. In the end, Chii ended up cleaning the olive oil mess all by herself.

Chii says she thinks girls’ fights are even more destructive than fights among boys. She asks Kumai-san if she fights with her siblings, and she says she does. Kumai-san has two little brothers, but they’ve already grown so much that she couldn’t win against them anymore if it got physical. She can, however, still win against them in verbal arguments.

Chii assures the listeners that the members of Berryz never got into any physical fights amongst themselves: it’d be more just the innocent, “hmph!” kind of thing. Nowadays, they no longer even have the verbal arguments, which the two agree means they’ve become even closer than before — Chii concludes by saying she’s sometimes surprised at just how close they actually are. 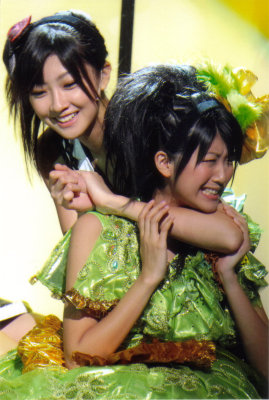 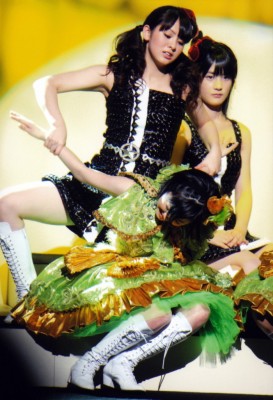