Respect for the Aged Day

The third Monday in September every year is Respect for the Aged Day in Japan. Meimi immediately wants to know if Takechan has any plans to pay respect her elders. Takechan says sure, but she then complains that there are an awful lot of holidays in Japan for old people. She asks if they didn’t just have a Respect for the Aged Day at the beginning of the month, and Meimi says no, that was Labor Day to pay respects to laborers. Takechan is confused. It turns out that Takechan is confusing the root for ‘rou’ in ‘kinrou,’ or ‘labor’ for the ‘rou’ in ‘roujin,’ or ‘elderly person,’ so she thought that there were two Respect for the Aged Days. Takechan also announces that she has something of a grudge against the holiday because she always noticed that everyone was nicer to her grandparents on Aged Day than they were to her on her birthday and she wants to know why, even for just one day, weren’t they nicer to her. Meimi says that she always gives presents to her grandparents on this day; Takechan applauds her. Takechan then asks which day was more recent, Mother’s Day or Father’s Day. Once Meimi enlightens her, Takechan says that last Mother’s Day her family all did karaoke at home and had melon and that was it. Takechan does not have a good understanding of the calendar year and national holidays. 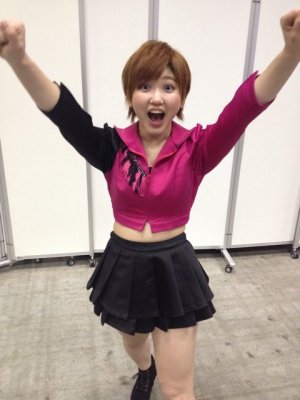 Last week S/mileage Station was transformed into Marotesque Station by Kanyon, and Meimi says that it was a very long recording for her. As you might have guessed by Meimi’s lack of judgment on Takechan for not celebrating any major national holidays, she tries very hard to be pleasant and go along with things on the radio, but it was very difficult the last time. Kanyon wanted to talk for the majority of the show about Berryz Koubou and their impending hiatus and she would often look at Meimi and say, “You know?” or “You remember, right?” when Meimi actually had no idea at all. She tenuously agreed to everything she said to make the show flow better and not make Nyon angry, but she was having a lot of trouble pretending like she knew what was happening.

They move on to talk about last month and the flurry that was the Hello!Cons, S/mileage lives, and release events and how happy they are to have a little bit of a break from that. Meimi says that performing is a very exhausting job, but it’s embarrassing to do handshakes after the show now because all of her makeup is coming off and her eyeliner is rubbing all around her eyes and she worries what will happen if she moves or touches her face in the wrong way. Takechan had a different sort of embarrassment after a show, once.

Takechan: Apparently I had something stuck in my teeth the entire show. Like I had eaten something before or whatever and then when we started the handshakes everyone told me I had something in my teeth the whole time.
Meimi: (laughs) That is embarrassing.
Takechan: But then, you know, I tried really hard… and got it out.
Meimi: Wait… what?
Takechan: I mean not with my hands, since that would have been gross so I just shut my lips and (grunts) got it out.

Meimi says that she has had similar experiences with her makeup. When she sweats a lot (as most anyone who wears makeup is familiar) her foundation starts to melt off and some of it will get stuck in her mascara and she’ll just have drippy white eyelashes and female fans will often come up and say, “Mei, your eyelashes look terrible,” so she tries to fix her makeup as much as possible between the end of the show and the handshakes. Takechan says she doesn’t do anything to fix herself up. One day she just said to herself, “Let’s do it,” and just let’s it go, let’s it go, turns away and slams the door. Meimi wants to know if she doesn’t care what they’re going to say. Takechan says she’ll let the storm rage on, the cold doesn’t bother her anyway. Meimi says that she has to fix her foundation afterward because if she doesn’t she just ends up looking like the Japanese flag with red all around her nose and eyes and the rest is white from all her foundation piling up with sweat. 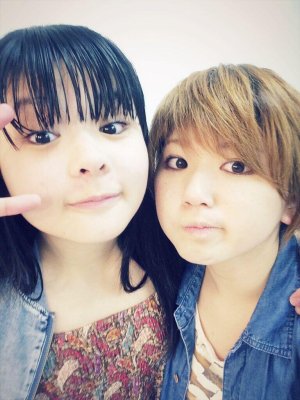 A lot of people have written in requesting that Meimi do a Gekidan Tamura performance of Urashima Taro, which is honestly something Meimi has wanted to do as well. However, she will need some help for this, so she ropes in a very special guest for this broadcast: Takeuchi Akari, who will be playing the role of the turtle. Meimi warns her that she has to do this seriously or else it won’t turn out well. Takechan thought she was being serious about a special guest and was going to bring in Zukki or Ayumi or somebody since they’d probably be happy to be the turtle. I will note that this particular corner is one that is best if you listen to it on your own. Meimi plays all parts but the turtle.

Meimi: Yay yay!
Takechan: Stop it, that hurts…
Meimi: Shut up, you’re lying, it’s not even sharp, it doesn’t hurt.
Takechan: It hurts, it hurts…
Meimi: Hey, you… (snickers) Wait, wait.
Takechan: Hey, what’s the matter? Tamura!
Meimi: Okay, I’m sorry, we’ll start from “Hey” … Hey, you, stop picking on someone weaker than you. I’ll throw you! … Turtle-kun, are you okay?
Takechan: Thank you for rescuing me. I will take you under the sea to the kingdom of the Dragon God. Sploosh! Bubble bubble bubble sploosh bubble bubble bubble
Meimi: Is the kingdom far?
Takechan: We’ll be there soon. Look! You can see it.
Meimi: What an incredible building! What massive doors!
Takechan: Huh? The doors won’t open. Is it Sunday?
Meimi: Does something happen on Sunday?
Takechan: It’s the day off here. Hold on, let me check around back. Zip!
Meimi: Oh, he left! But if it’s the day off, won’t everyone be gone?
Takechan: Urashima-san!
Meimi: Ah, he has returned! Oy, Turtle-kun! Wasn’t the back shut?

Okay, let me explain, since the whole thing is a pun that doesn’t make sense in English. The ending line, “Wasn’t the back shut,” in Japanese is said as, “Ura shimatotta darou?” Which, said quickly, becomes, “Urashima Taro,” the name of the protagonist and the story. This script comes listener Joraborata. It ends with some wah-wah music. But it’s fun to listen to to hear Meimi’s acting and Takechan’s less than enthusiastic participation (if I were more tech-saavy I’d cut out the snippet for you, but alas, I am not). Meimi says that she did not sound like a turtle, she sounded like Takechan, and that’s a little disappointing. Takechan said she thought she sounded like a turtle, at least.

When they come back from the song, Takechan announces that her favorite kind of hamburger is just a plain hamburger. Meimi seems to take issue with this. She says that Takechan always looks so cool when she’s singing and dancing on stage, but giving answers to questions like this offstage kind of ruins that image for people. Takechan says it’s fitting, though, and she really doesn’t even like hamburgers that much to begin with. Meimi says that it wasn’t the best way to announce herself.

Takechan: I mean I just don’t know that much about it, you know?
Meimi: So you’re an idiot?
Takechan: I wouldn’t go that far. I just, you know, well, like
Meimi: It’s fine, you’re S/mileage’s idiot.
Takechan: Oh. Okay then.

This one is from Pepper. They mention that this is their first submission, and they wrote it because it made them really happy to hear other people’s letters getting read and they couldn’t sleep just thinking about it. They have a question for Meimi. They were watching a certain show and they focused on Meimi’s home prefecture of Gunma and said that people from Gunma learn to count differently. They ask Meimi to count to 20. The first ten numbers sound like how anyone would count, but then 10-20 turn into a strange song almost, just like the show said. The listener is also curious if Wada does this too, since she’s also from Gunma. Takechan says that Wada and Meimi are very different, because she had heard Meimi counting this way the other day and it shocked her but even when Wada counts strangely she just assumes it’s because it’s Wada. Meimi asks what’s so strange about it. Takechan rattles off the numbers, and when pressed, counts more slowly so that Meimi can actually hear the rhythm of the 10-20 range. Meimi does not like it. Takechan does not like how she counts, either. They go back and forth comparing counting styles and refusing to agree with each other until it’s time to end the show.

Meimi and Takechan apologize for talking so much this time and making it difficult for the radio staff to edit. Takechan also messes up Meimi’s ending, so they’re sorry for that, too. 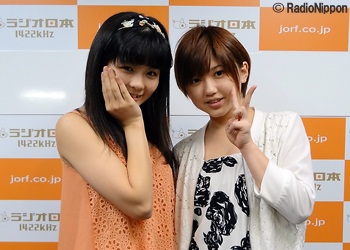