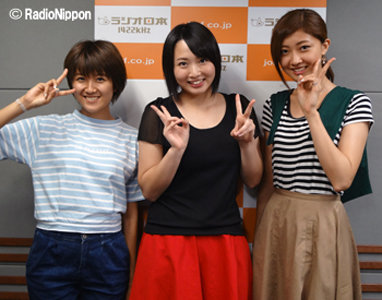 The four topics this time are all about Chii herself.

Topic #1: Chii tells a story from just earlier today when she was headed towards their recording studio.

She got off the subway and got on the elevator with a salaryman who for some reason started stealing glances at her. At first she thought he must’ve recognized her, but then she noticed he looked quite young and stylish — “there’s no way someone like that would know about me,” Chii figured.

But even after getting off the elevator, he still kept looking at her. Chii wondered if he wanted to say something to her but was just too shy to do so. Chii felt kind of sorry for the man, so to make it easier for him, she gave him a look that kind of said “Hmm? What is it?” That’s when the man finally spoke up.

Kumai-san and Maasa start laughing. Making matters worse, Chii explains that she was wearing high-waist pants with a fly that’s at least 10cm long (see picture above). And it was entirely open. Chii just screamed. In hindsight, the salaryman must’ve been looking at her to signal for her to close it.

Topic #2: Next, Chii returns to a topic she spoke about in a previous episode: her troubles with air conditioners (namely, feeling too big of a difference between 26°C and 27°C).

Chii reports that she’s found the perfect temperature for sleeping: 29°C. Kumai-san asks if that isn’t too hot, and Chii says that while it feels that way at first, you wake up just right because during the night you tend to displace your blanket and so on. If you set the temperature to 28°C, you’ll definitely wake up feeling cold in the morning. Maasa says this is also more eco-friendly, and Chii says that is right, and says that sleeping with her air conditioner set to 29°C thus makes her a better person.

Topic #3: Also previously on this show, Chii had said that she would pick up the hobby of running. The last time she was supposed to go buying running shoes, she’d caught a cold so she wasn’t able to go. Thus, she announces that she’s finally going to go buy the shoes tomorrow!

Topic #4: This next report is provided by Maasa. She gives us the major news that Chii has currently injured her left baby toe. They all laugh, and Chii calls Maasa awful for telling everyone. Kumai-san says it looks really painful and Maasa asks what on earth happened to it.

Chii explains that she stubbed it on a shoe shelf in their entranceway. While it really hurt at first, she just forgot about it. Later, when she was sitting down and putting on makeup, she realized it was still hurting. She looked down and noticed there was, in her words, “demi-glace sauce” coming out of it. Maasa and Kumai-san laugh and tell Chii to not use that word to describe it. She says it hurts really bad even now, and that she’s going to do her best to somehow heal it before their Budokan performance. 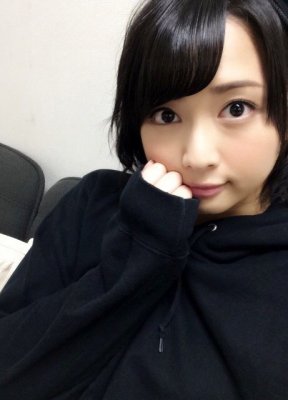 Fan mail #1: The listener talks about how Chii, Kumai-san and Maasa are all famously lazy about updating their blogs. Since a couple of months ago, however, Maasa has suddenly gotten so active at updating her blog, she’s now second only to Shimizu Saki. The listener asks Maasa if something changed about her stance concerning blogging.

As a post-script, the listener says that Maasa’s selfies on her blog are really, really cute as of late. He says he always knew she was cute, but these new selfies have made him fall for Maasa all over again.

Once she finishes reading the letter, Chii suddenly starts yelling at Maasa.

Chii: WHAT HAPPENED, MAASA?! The three of us promised to not update our blogs together!
Maasa: NO WE DIDN’T! (laughs) Stop it! You’re going to make the listeners misunderstand!
Kumai-san: (laughs)

Just the other day Chii was talking to their manager, asking why Maasa was blogging so much and saying that because of her, she was quickly becoming the very least active blogger of the whole group. The manager had no idea why either. Maasa says that her updates have gotten more frequent since around March or April, and Chii, again, starts yelling “WHAT HAPPENED TO YOU, MAASA?!“

Maasa had several motivating factors. First of all, she explains that it was right around April which holds significance in Japan. She was also checking Saki-chan’s blog daily, who she noticed could be posting up to five or six times per day. Thus, she thought she should also work a little bit harder at her blog, and gradually her fans started giving her feedback that they were always looking forward to her blogs. This made her want to work even harder at it for their sake, and that’s how she got started.

She says it’s not like she hated blogging before then or anything — she was just bad at putting her thoughts into words, and this made her hold back from blogging too much. “But as long as my thoughts are getting across to the fans,” she figured, “I might as well blog anyhow.” Kumai-san says Maasa is saying some pretty noteworthy things here, and announces that Chii has quite an expression on her face right now. Chii starts getting desperate, and begins claiming that Maasa is just trying to make herself look better in the eyes of the radio show’s staff. Maasa laughs and asks what on earth her blogging habits have to do with the radio show’s staff’s opinion of her.

Kumai-san asks Maasa if she never runs out of things to say on her blog. Maasa says she does, and she usually turns to Saki-chan for advice in times like that.

Maasa: Saki-chan also runs out of things to talk about, but she still does her best because she likes blogging.
Chii: … I like blogging, too…
Maasa & Kumai-san: (laughs)

Chii says she feels especially embarrassed about posting selfies on her blog, and Kumai-san totally agrees. Chii says Maasa has gotten really good at taking selfies as of late — even Chii’s mom has taken note of this. Maasa says she’s learned from the best (Shimizu, Natsuyaki, Sugaya), but that she still can’t do winks because it’s too embarrassing.

Chii and Kumai-san both agree to follow Maasa’s example and become more proactive with their blogs. 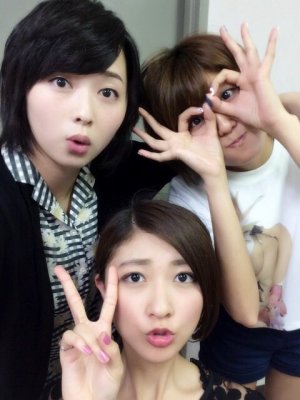