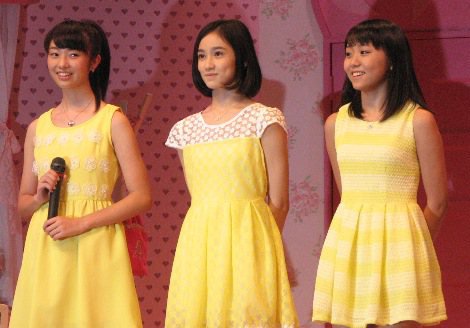 Takechan says that she really hasn’t talked to any of the new members. She talked a little bit with Rikako when they were in Lillium together but not much, and even though they were in Team Okai together with Murotan they never spoke to each other. AiAi looks nice, but they know nothing about her. Meimi says that she’s most happy about the reception they’re receiving. She remembers that when she and Takechan joined, they didn’t know what to do about anything and people would tell them to leave the group and get out and things like that, but she swears she won’t let that happen to 3rd gen.

Takechan: Actually, they might have just said, “Ah, Takechan is cute.”
Meimi: Oh yeah, that’s right, because Takeuchi Akari-sama is here, everything is okay, right?
Takechan: Yes, Takechan, with your hair blowing in the wind, someone might have said that.
Meimi: I think someone might have called you the once in 1000 years idol back then.

In all seriousness though, Takechan doesn’t remember being told anything nasty when she first joined. Meimi thinks it’s because Takechan is so happy all the time that she just didn’t mind it, but Takechan clarifies: “See, I’m the sort of person who doesn’t get minuses. Minus = Plus, in my brain.”

Of course when you think of baseball, you think of Takechan, right? Right? Anyway, the pennant race has started again for the Giants. Unfortunately for Takechan, this October has been spent mostly with tour stops and play performances so she hasn’t been able to watch at all, but as her activities start slowing down she hopes she’ll be able to go to the climax. What is the climax, you ask? Tokyo Dome. Takechan definitely thinks they’ll be able to make it that far. However, nowadays her family members are really busy so she might have to go on her own, which she has actually never done before. She always goes with at least one family member to a baseball game, but she thinks that this will be a good challenge for her and she’ll be able to go to more games by herself after she works up the courage. Oh, also, you can’t come. She doesn’t want anyone else to come. “I don’t think anyone will…” Meimi says. Takechan continues on, talking about recent victories and upcoming games. Here’s an extended quote that perfectly sums up why this corner is often a disaster.

Meimi: . . .
Takechan: Hey, talk.
Meimi: Aw, come on, I don’t know anything about baseball and you keep talking and talking and then you try to make me talk and I don’t know but you don’t explain anything so, you know, explain it please?
Takechan: It’s really annoying having to explain everything, though. I do it every single time. But they won their league.
Meimi: Their what?
Takechan: Their league. Like they beat everyone in the whole region.
Meimi: Oh. Victory~!
Takechan: Hahahaha… but they’re really good.
Meimi: Ooh.
Takechan: But first, you know–
Meimi: Who’s really good?
Takechan: The GIANTS!!!
Meimi: Huh? Giants??
Takechan: SHUT UP! Okay, at first–
Meimi: Wait a second, what are giant? What do you mean?
Takechan: Yomiuri Giants.
Meimi: . . . . . . . . .
Takechan: Giants. Like a giant.
Meimi: Ah! What about the carp?
Takechan: Hiroshima Toyo Carp.
Meimi: . . . Okay. Let’s move on.

Okay, so without talking about anything really about baseball at all, that was today’s corner. Meimi harasses Takechan, asking who the MVP is over and over again, as she tries to close the corner.

So out of nowhere, we get a pre-recorded snippet from Fukumura Mizuki of Morning Musume, who promotes their newest single and their current concert tour. She also wishes Meimi a happy early birthday, and says that she thinks Meimi is someone she’s bound to by destiny because she was the first person she ever met with the same birthday as her. She wants Takechan to update her blog, too. Time for a song. 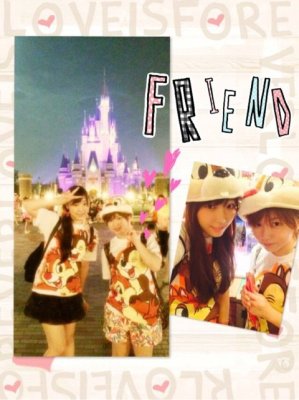 Of course Takechan is Dale

This letter is from Shikoku is here. They went to go see S/mileage’s Takamatsu live, which was great because they seemed to be more independent than usual and gave a great show. In particular, they liked how in Takechan’s introduction she did something she called “the ultimate question.” They think it would be cool to do this over the radio. It could be a new corner where the S/mileage members think up questions for the listeners, who then send in their responses to be compiled and read on-air. The question she asked at the live was, “Would you rather be permanently in the center of the group but look terrible or be a back-row member and look fabulous?” Takechan says she’s already a back-row member so she would rather look fabulous from the back than look terrible in the front. Takechan stipulates that if you pick the center, you’ll always be wearing rags, so even when you’re not performing you have to explain to people that that’s just your outfit to promote S/mileage in. Meimi feels like that outfit would smell really bad. However, Takechan thinks that this new corner might be a good idea. Meimi thinks that she should pass the question on to someone else in the group. She picks… Rinapuu. Meimi yells, “WHY?” Takechan thinks she’d betray her cool image and give an interesting answer. So not Meimi it is.

Meimi ends the show by letting Takechan know that her dad is a Hanshin Tigers fan, so maybe she knows a little bit about baseball? I doubt it. 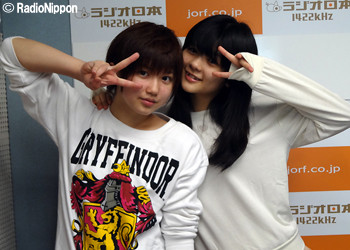