Continuing from last week’s Hawaii topic, Sayu begins by telling more stories about their recent trip there, this time focused more on the members themselves. Sayu anticipated it would be fun going there with this current lineup and everyone was really excited about it — Harunan alone in the weeks preceding it told Sayu at least on five different occasions how much she was looking forward to it. Sayu says that it was such a fun and happy time, it exceeded all her expectations.

After work they’d do things like run around on the beach while still wearing their outfits from the photo shoot and stare up at the starry night sky — they even pretended like they all saw a shooting star together just because of how lovely the idea of it sounds. Still, Sayu was truly happy, and she says looking at the stars made her think quite deeply about life and how among those many stars Sayu just happened to be born on this one, in a country called Japan, and meet with the other members of the group. It reminded her of the lyrics of “Toki wo Koe Sora wo Koe” and about how in life you end up meeting the people that you’re supposed to meet, and it made her feel like the song is about the concept of Morning Musume itself as a whole.

Seeing the starry sky with the others that night gave Sayu a whole new appreciation for “Toki wo Koe Sora wo Koe,” and she thinks this trip strengthened the bonds between the members even further.

Fan mail #1: The listener asks Sayu what she got as souvenirs from Hawaii for her mom and big sister, and asks if she bought anything for herself.

For her mom, Sayu got a pink Chanel rouge since she’d asked for one, and for her big sister she bought some Kona coffee and chocolate with macadamia nuts in it.

Sayu has a specific type of chocolate with macadamia nuts in it that she and Kamei Eri have been really, really addicted to since way back. They absolutely love it and they’d always buy loads of it to bring back home. So when Sayu was about to go to Hawaii this time, she asked her sister what she wanted Sayu to bring her, adding that the chocolate she loves and always brings back was of course a given. Sayu’s sister, looking a little apologetic, suddenly went “it’s kind of hard to say it at this point, but… to be honest, I actually don’t really even like that chocolate.“

Sayu was pretty shocked to hear this: she’s been to Hawaii about eight times in the past ten years, and each time she’s always bought some of that chocolate for her sister. And yet, this was the first time her sister had ever told her she doesn’t actually like it. Thus, this time Sayu didn’t buy the kind of chocolate she’s always bought and she just brought her sister the “normal” type. Upon seeing it her sister looked really happy and excitedly said “YES! This is the one I wanted!” For the first time in ten years, her sister finally received the kind of macadamia nuts chocolate she’d wanted.

For herself, Sayu bought a rucksack which is something she’d been wanting for quite a while now.

Fan mail #2: The listener talks about Sayu blogging about how she was happy when Daaishi wore an “addicted to Michishige” T-shirt. They ask how Sayu feels when she sees members wearing T-shirts that Sayu herself has designed.

Sayu was indeed really happy about Daaishi wearing the shirt, which she reveals Daaishi actually bought with her own money. (Hard to believe, I know.) While Sayu, too, owns lots of T-shirts of both her seniors and juniors, she says it takes courage to actually wear them. Knowing this made her appreciate Daaishi wearing the T-shirt even more. 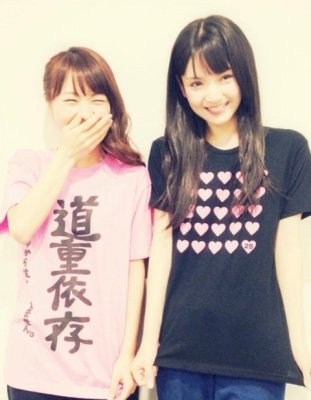 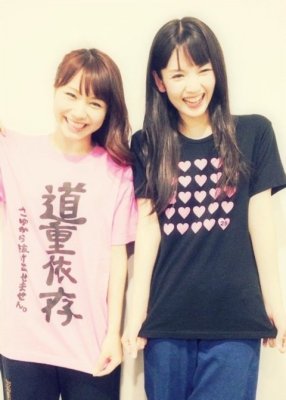 Fan mail #3: The listener talks about seeing “Frozen” on the plane on the way to Hawaii as per Sayu’s recommendation, and reports also watching six other films on the flight. The listener asks what Sayu did on her flights to and from Hawaii.

While Sayu does love “Frozen” so much that she’s seen it over ten times now including at the movie theater and in both Japanese and English, she didn’t watch it on the plane since she can always just watch it on DVD at home. She instead watched the Japanese film “The Snow White Murder Case” which she enjoyed, but after that she went to sleep right away in order to avoid getting jet lagged. On the way back to Japan, she concentrated on carefully sorting out all the pictures she’d taken in Hawaii.

Situation #1: If Tsugunaga Momoko commented on how “Michishige-san is so pretty and refined.“

Commenting on Momochi in general, Sayu thinks she’s genuinely funny: even when you catch her on a day when she’s not doing Momochi musubi, she’s still her funny old self when you talk to her. Sayu says the two are actually really good buddies, though she says Momochi might try to deny this if asked.

Situation #2: On Ikuta Erina describing herself as a “one-in-a-million outstanding talent.“

Sayu laughs and says this one is great. She promises to memorize it so she can try using it on Ikuta herself the next time she says this kind of thing.

Situation #3: Morning Musume is appearing on TV and they’re asked who the cutest girl in the group is. The members unanimously answer “Michishige-san!“

Angel Sayumi: Oh jeez, you’re embarrassing me. But thank you!
Devil Sayumi: You fools. Don’t you realize that one of you is supposed to answer “ME!” in order for it to be fun television?

Sayu says she does kind of feel like Devil Sayumi sometimes: Ikuta will at times, albeit rarely, call herself the cutest when asked this sort of question. More often than not, though, she’ll answer “Michishige-san,” and Sayu of course knows Ikuta doesn’t really feel that way. She thinks it would be better if Ikuta just answered honestly as it would be more entertaining.

Situation #4: After announcing her graduation on stage in Yamaguchi.

Angel Sayumi: I was so nervous, but I’m glad I managed to tell everyone properly!
Devil Sayumi: Hah. Look at all these people, being so affected by my announcement…

Sayu says she wouldn’t say this kind of thing of course, but she was nevertheless happy how her announcement made the news. Furthermore, Sayashi later told her that she was trending at no. 1 on Twitter which is something Sayu didn’t even anticipate, so she was really glad about that, too.

Situation #5: When asked what would happen if Sato Masaki became the leader.

Sayu says she would like to see a Sato-led Morning Musume. She says that each new leader brings a different “color” to the group, and she’s felt this way about all seven leaders who came before her. For Sayu, each leader’s era has been quite distinctly different from each other, so she wonders just what Sato’s group would look like and if being the leader would change her as a person. 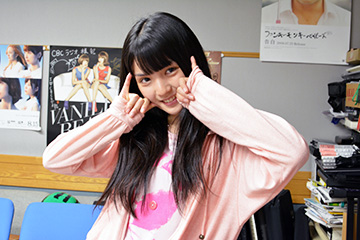 Sexy word of the week: “Chaplin”