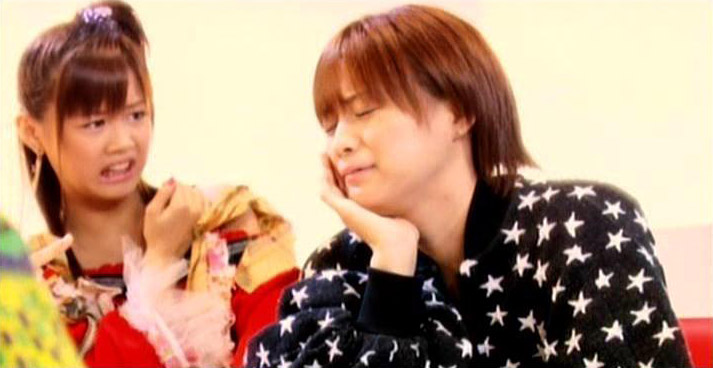 Fan mail #1: “I’m just like Kame,” the listener says. He has three problems he needs help with. First: his inability to clean up after himself. Second: his inability to throw things away. Third: his constant need of having to depend on his mother. He wants to know how he should go about fixing these issues.

Kame has a theory: the person sending this message, worded the way it was, is proof to her that the he doesn’t actually want to even fix these issues — regardless of what he might be saying. She’s convinced that the listener only wants to have something in common with her. “Well, maybe he indirectly wants to fix those issues,” Kame says. “But he wants me to be the one to fix them.” Rereading the message, Gaki-san can see what Kame means: the whole thing reads like it might have been written by Kame herself.

Kame shares an episode that happened to her this morning. She went to buy some gummies from a booth with her mother. The lady on the other side of the counter was smiling as she watched Kame pestering her mother about all the things she wanted her to buy. The lady asked: “this is your mother, right?” Kame then quipped back with: “of course — she certainly doesn’t look like my big sister, does she?!” The lady spoke to her about how she also has a daughter who will similarly do “just about anything” like Kame.

Kame concludes by saying that she did something good in getting the lady at the booth to smile like that. Thus, her conclusion is that “there is nothing wrong with depending on one’s mother.“

Fan mail #2: This listener has a simple question for Disney Expert Gaki-san. He will soon be visiting Disneyland with his wife, and he asks Gaki-san for her recommendations as to attractions they definitely shouldn’t miss out on.

Gaki-san already managed to visit Disneyland during its Halloween season this year. She says the first things they shouldn’t miss while they’re there are the limited edition pumpkin flavored churro and the Glove Shaped Chicken Pao. She also loves the pink, pumpkin-shaped Minnie popcorn buckets that they now have. (Kame is not a big fan of the price of said popcorn bucket however: it’s a rather hefty 1,200 yen.)

Fan mail #3: The next listener wishes to know how many point cards the hosts are currently carrying in their wallets. (The listener says that they currently have a total of 21, of which four have already expired.)

While the hosts don’t have an exact number to give, they both have a bunch of them as well. The two previously even bought matching point card holders for themselves — although they both admit that they’re no longer using them. “The thing with point cards is that you need to be carrying them with you at all times if you’re looking to actually use them,” Gaki-san helpfully explains.

Gaki-san Quiz: Gaki-san says there is a certain feeling she’s been suffering from the entire day, and she can’t seem to make it stop. What is it?

Kame’s guess is: “pheromones.” She explains that she was actually thinking of something toilet-related, but she figured Gaki-san wouldn’t say something like that on-air. Gaki-san says that while this is definitely true, she’s just as unlikely to say something silly like “my pheromones.”

The correct answer is hiccups. Gaki-san was suffering from them just minutes before the show started. But just like how it works for her when she does it before concerts, when she starts worrying about how she’ll be hiccuping throughout the show, she miraculously stops doing so.

Kame Quiz: Kame and Sayu went to eat yakiniku together the other day and according to Kame, they both ate a bunch. Much to Gaki-san’s disappointment, Kame asks the exact same question as two weeks ago: how many times did they change the netting on their grill during their time at the yakiniku place?

As a hint, Kame says that the two were in there for about five hours. Gaki-san guesses that it was five times. This is incorrect. The correct answer? They changed nets one time. Gaki-san asks that Kame never again ask her about yakiniku nets on the show. 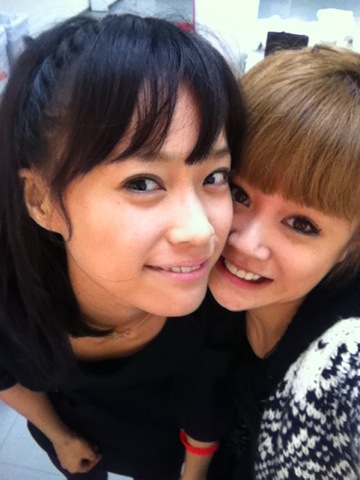 Gaki–Kame (while trying to sound like they’re “3D”): We’re waiting for your messages! Go ahead and ask us anything, such as “is it true that Kame tastes more like autumn than even mackerel?” Anything goes!