Radio Nippon’s October Power-up week is coming up, so Meimi asks Takechan was she would like to do for it. Before Takechan can answer, Meimi interrupts with her idea. She wants to bring someone involved in omiai brought into the studio to talk about their job and how it works and if they could put the S/mileage members into the rotation to see what people’s reactions would be. Takechan says she’ll pass. Some of you are probably familiar with the concept of omiai, but in case you aren’t, I’ll explain. Typically when someone in Japan gets married, it’s because of one of two things, renai (恋愛) or miai (見合い). If you can read those characters you might guess what the difference is, but renai is romantic love, so you meet someone and date them and eventually fall in love and get married and theoretically live happily ever after. Miai is when you’re reaching an age where you want to get married (or in many cases when your family thinks you should be getting married) but don’t have a boyfriend/girlfriend and have no realistic prospects, so you meet with a miai specialist, a matchmaker, essentially, or sometimes a grandmother or other relative with connections to find you someone who you might not love romantically, but could see as a lifelong partner and parent to your children and can support your household. Once it’s established that you don’t hate each other in person, you get married. Nakazawa Yuko got married this way; it’s a fairly common practice still, there’s your Japanese culture lesson for the day. Anyway, what Meimi was asking for, then, was to be put into the pile of ladies for men to choose from and for the matchmaker to gauge how good of a candidate she’d be. Takechan is understandably weirded out.

Takechan’s idea is instead to go out somewhere and record the show. They’ve been talking a lot about going to an amusement park for their 100th show so they can’t go there, but she thinks it would be fun to go to a school or pre-school and talk to the students there for the radio show. However, Meimi questions the practicality of going out in public and talking to people, not because of technical difficulties but because none of the members would really feel comfortable just running up to people and asking them questions in the street. Meimi says she’d be fine doing it, but Takechan agrees that she would most likely be the only one. Meimi says, “I can just host that week by myself, it’s okay.” Meimi has no time for shyness. 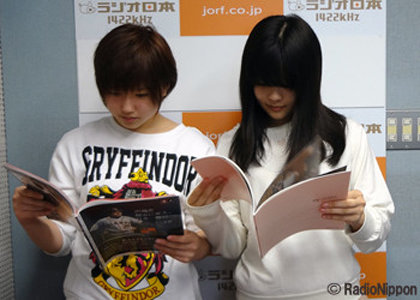 The Top 3 Beauties in Japan

They also take the time to congratulate their senior member Fukuda Kanon on getting a regular spot on a different radio show. At first they celebrate because this means that they will no longer have to suffer through Marotesque Station, even though Takechan has never actually had to sit through a recording with Nyon. Then, however, Meimi realizes in horror that this will mean that Wada Ayaka will be called on as a special guest more often, and sitting through her radio shows is even more agonizing than it is with Nyon. Takechan considers that maybe 3rd gen will come on as guests more instead, which also frightens Meimi as they might take over the show. “This radio show is all we have! We have no promotion for ourselves besides this!”

Takechan: Actually I’ve been pretty busy lately.
Meimi: That’s for work for the whole group, though! Like Fukuda-san and Wada-san have their own individual projects like magazine shoots, but we don’t ever do anything like that…
Takechan: Why would you say that? I might be getting to do stuff by myself, you don’t know! Akari gets the front cover, Akari does tons of gravure, Akari appears on TV a ton, all of that might be happening right now. Like I look up and go, what? Oh, yeah, I’m on all the magazines.
Meimi: Oh, right, maybe. But now that we have the 3rd gen members, there’s no need for us to be the visual members anymore…
Takechan: What.
Meimi: I mean, they’re all super cute, right?
Takechan: Yeah, so?
Meimi: So like you were the visual member before, but now that they’re so cute–
Takechan: Wait up, hold the phone, I was not the visual member. I said I might be cute, but that’s it.

Meimi decides that she needs to focus on trying to become better at talking to compensate. Takechan tells her to do her best, since she isn’t as cute as the potentially cute Takechan. Especially since the other three 2nd gen members, minus Meimi because she has such a negative attitude, are Japan’s Top 3 beauties. Meimi asks if there’s the potential to get into the top beauty ranking, but Takechan says no, there’s nothing she can do, the top 3 are Takeuchi Akari, Katsuta Rina, and Nakanishi Kana. Meimi wonders who ranked them, if it was among themselves or girls or what. Takechan reiterates that this isn’t the world beauty ranking, only for Japan, and that it doesn’t matter who ranked them because they’re the top 3. She says Meimi should try her best to become more beautiful even if there’s no chance of her getting to their level.

“What’s this, what’s this?” Takechan wonders aloud. Oh right, it’s Meimi’s birthday coming up soon! Meimi laughs because although that line was written in their script, she didn’t expect Takechan to actually say it. She’s turning 16, which is odd for Takechan since she can’t believe there are still people in the group that are 15, but Meimi says she’s perplexed now at this age and being an idol. She joined S/mileage at 13, to which Takechan screams “WHAT!?” before realizing that she herself was only 14 when she joined, but Meimi says that when you’re a young idol, you can compensate for not being as cute (which she does not think that she is) by being happy and super energetic, but now that she’s getting to this age, she doesn’t know if she should keep trying to be energetic or if she should just try to become more mature. Takechan’s sagely advice to this situation is that girls usually think when they turn 15 or 16 that they’re becoming closer to an adult so they should act more mature, but that’s just a waste of time because they’re still young and kids. She strongly advises against trying to grow up too soon.

Meimi argues that she has to change somehow though. Takechan makes some irritated grumbling noises while Meimi goes on about 3rd gen again. She doesn’t see them as a threat since they’ll bring great things to S/mileage and be popular and promote the group, but she feels like she can’t compete with them on looks so she has to find someone else to stand out in. She thinks maybe 2nd gen will become the funny members instead since they’re really funny but maybe not as cute as 3rd gen. “And there you have it, Tamura Meimi’s negative attitude,” Takechan proclaims.

Takechan: We are Japan’s top 3 beauties, we don’t have to worry about that.
Meimi: Okay, but the fans probably think that you’re cute but probably think that it’s sad for you to have to try so hard next to the new members, right?
Takechan: No, they don’t. I’m just that beautiful.

Takechan continues to refer to herself as one of the top 3 beauties as she introduces the first song. 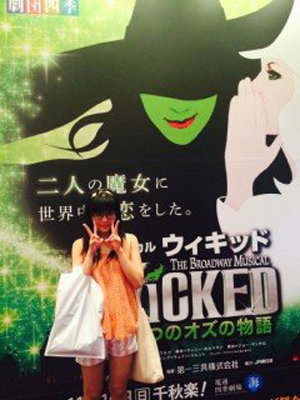 Ordinarily Meimi would use this corner to act out a script sent in by a listener, but she’s going to change direction for today’s show and instead use this time to talk about her favorite stage actors. As you may very well know, Meimi is a child of the theater. Her mother owns a theater company and she has been performing on stage since she was little. She also has a very strong love for Gekidanshiki and Takarazuka and has voiced interest in wanting to join Takarazuka one day. Although she has chosen to talk about this today, she doesn’t actually know what to talking about, so she asks Takechan to ask her questions. She can answer anything, Takechan just has to ask. What’s her favorite play? Wicked. What’s her favorite musical? Wicked. Besides Wicked? Okay but everyone likes Wicked. Top 3? Meimi isn’t sure, she hesitates for a moment. Takechan assures her, “You don’t have to say number 1, we already know what it is.” Number 3 would be The Lion King, she decides. Takechan asks her why and then ignores her answer as she provides her own interpretation of the opening number of The Lion King. Meimi doesn’t know what would be a solid number 2, but for right now one that she really likes is Mamma Mia!, which Takechan knows nothing about but has seen a commercial for it.

Although don’t forget when Meimi did her own rendition of The Lion King, only to punch Rinapuu in the face in the process

Next question is her top 3 Gekidanshiki performers. Number 3 is………………….. Takechan reminds Meimi that this is radio and she has to talk to fill in the air time, so eventually Meimi says that it would either be Shiba-san or Nakano-san. She likes Shiba because everything he does on stage is cool and he’s a great actor to watch. She likes Nakano because she’s really good at singing and she especially likes her in her protagonist roles although she also sometimes plays antagonists. Oh, also, Meimi brought some theater pamphlets for Takechan to look over for her own knowledge. “Oh… thanks.” Takechan now knows what her baseball corner must feel like to other people. Number 2 is Yamamoto-san, who is very short for a man but his dancing is incredible for being that short. Meimi saw him play a Munchkin in Wicked and she was astounded by how powerful his dancing was, it was like he was just as tall as everyone else. She almost cried seeing him. She’s even gone to other plays just because he’s in them. Number 1 is indisputably Higuchi Asami-san. She will be someone Meimi admires for all eternity. She was in the original cast of Japan’s Mamma Mia! She’s also been Elphaba in Wicked (Takechan: “There it is.”), she was Nala in The Lion King, and Anita in West Side Story, so she appears in most all of the major productions and does promotional work for them most of the time. Meimi says that her acting is very dynamic but she also has a very masculine, powerful presence. She strives to be like her just as a person, not even as an actor. Does Takechan have any more questions? Nope. That’s okay, because Meimi wants to talk more about Gekidanshiki.

One thing she really loves about Gekidanshiki is the consistency and quality of their performances, especially in the more minute details, like their voice projection. Meimi has heard them do vocal warm-ups and all they’re all on point, but they each can accent their lines to project all the way to the back of the theater so that no one is ever confused about what they’re saying on stage. It’s most important when conveying the story, Meimi says. She also says that there is no ad-libbing in any of their performances because they strive to make every show the same so that it can be enjoyed by everyone at the same level. Of course, the acting is always slightly different, but the fun part of each different play is seeing who takes what role and how they interpret it. Don’t worry, Takechan, Meimi has a lot more to say on this topic.

Meimi: I just need, like, one more hour.
Takechan: You can’t have it. 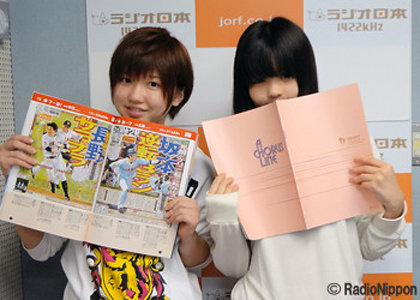