It’s Power-up Week for Radio Nippon, which means that this is a special show. It’s special in that hosts Takechan and Rinapuu have invited some special guests to join them in the recording booth today. Who are they? It’s a surprise. Rinapuu gives us a hint that they’re as cute as angels, which means the only answer could possibly Kananan and visual-center of S/mileage Tamura Meimi! Shocking! This leads to a lot of commotion considering Meimi’s opinion of herself on the last show, and so the top 3 beauties edge her out of the conversation. Kananan hopes that her cuteness will adequately be conveyed over the radio and Takechan and Rinapuu thank her for taking time out of her busy schedule to meet with them. Meimi does not get to talk anymore. 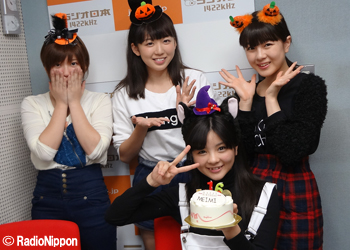 In this special corner, the members will discuss and debate each other on a given topic, namely, what should S/mileage do to prepare for the coming year. Rinapuu assures us that despite the long into from Takechan for this corner, it’s basically just them talking about whatever they want. Kananan says that now that they have 9 members, an odd number, she can finally take her place as a true center. The other members start to scream over her, especially Takechan, who says that it will definitely be her. Kananan continues to say that it’s strange thinking of themselves as 9 members because she has only ever talked to AiAi at the last Hello!Con but no one else has spoken to any of them. Meimi says it’s weird interacting with the Kenshuusei in general because she never knows who might be in the same group as her later on. It’s a puzzle. The fans probably enjoy it, though. Kananan asks who she thinks will make friends with the new members the fastest. Everyone is pretty sure it will be Kananan, but Kananan thinks that it will probably be Rinapuu. Rinapuu is the type to be the last to actually speak to the new members but will probably make friends with them the fastest. Rinapuu says it’s because she doesn’t know how to talk to new people so she just sits back and watches how other people interact with them, then uses that information to make friends with them.

Whatever the case, Takechan will definitely be the one to make friends with them last. Meimi says that, with no good or bad meaning attached, Takechan will sit in the dressing room and listen to music by herself rather than talking too much to everyone else. Kananan actually has no memory of when she started getting along with Takechan. She became friends with Rinapuu because they did gorilla impressions together and she had been friends with Meimi since the audition, but she doesn’t ever remember what started her friendship with Takechan. Takechan doesn’t remember talking to any of them for the first time, for what it’s worth. Meimi was scared of Takechan the first time they met, which Takechan says is a common occurrence. The new members won’t just come up to her and be like, “Takeuchi-kun!” (to which Takechan replies, “Don’t make me a boy!”) because she has a very dark aura around her, which is really just her shyness. Takechan thinks that should she get the opportunity she’d be the first to make friends, although they test this by giving her open room to start a new conversation with Kananan, and she can’t think of anything. 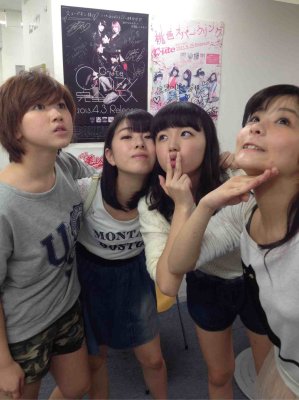 They change the subject to talk about their goals for the next year. Obviously a major goal would be to do a hall tour. They regret not being able to do one as 6 members, but they’re hopeful that they will be able to do one as 9. This brings up the issue of catering. Based on what they say here, whenever they do a live house tour, there isn’t enough space/resources to get food catered and they eat box lunches for lunch and maybe eat out for dinner. If they get a hall tour, they’d have their meals catered and they’d get hot meals for every tour stop. They got catering for the Budokan show and they all went nuts over it. Even the staff were happy about it. Meimi explains that when they do a live house show, only the managers, sound engineers, directors, and members get their food paid for; everyone else has to take care of their own food. In that line of thinking, it makes everyone on the tour happier when they do a hall tour and get catering so that everyone can eat together.

In another change of subject, they decide to talk about what their new group name should be. Meimi is eager to share her idea, which is “MeiMei to sorotta oozei group,” or “MeiMei and the large group.” Her idea is rejected. Kananan suggests, “Tenshi Kana with 8,” “Angel Kana with 8.” No one comments. She also suggests, “2ki members with….(1,2,3,4) 5!” as a backup. Meimi continues this line of thinking with, “AMeRiKa with…. with… (1,2,3,4,) 5.” Kananan also suggests the name of the radio show, SS1422, which is read like “S/mileage Station ichiou ni-nin,” “S/mileage Station with 2 members for the time being.” Meimi doesn’t like this because then the radio show would have to change its name, which she does not want. She thinks that if 3rd gen take over the radio show it will become Sasaki Station, which none of them want. They scold themselves briefly for being bad senpai, but then they think harder about new names.

Takechan: I think English would be good
Rinapuu: Yeah, English is cool and easy to remember.
Meimi: Something like Jackson 5 would be neat.
Rinapuu: Ew, what is that?

Kananan comes up with an idea based on her vague knowledge of other languages from doing Warera, Jeanne and comes up with the name Straight Tea, which they decide is a little too difficult for them to say. Meimi asks if kanji would be okay, which leads to a gasp or two from Rinapuu. Meimi explains that Takechan is actually really good at making kanji logos and think she could do something with their new name if it has kanji in it. The whole time they discuss this, Rinapuu repeats in the background, “English is fine, English is fine, English is fine.”  Takechan concludes this topic by saying that they don’t care how it’s written or what language it’s in, they just want a cool name. 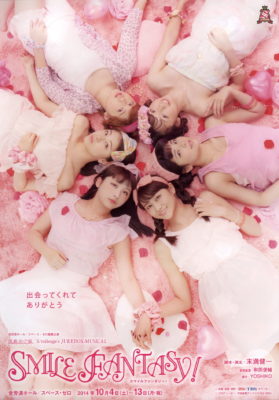 This letter comes from Light Blue. They congratulate AMeRiKa on their 3rd anniversary of being promoted into the group and say that they loved Smile Fantasy. It was a lot of fun and made them realize how happy they are to have encountered 2nd gen. They received a lot of letters like this voicing their support for the group, and they want to make sure that all of the fans know how much they appreciate said support.

Also, sudden announcement because it’s power-up week, they’re going to be giving away two posters from Smile Fantasy signed by 2nd gen to the listeners. To enter, submit your address, first and last name, and age to the radio show at ss1422@jorf.co.jp. I sincerely doubt this giveaway will be open to overseas entrants, but you’re welcome to try if you want. That’s all for this noisy, noisy show.