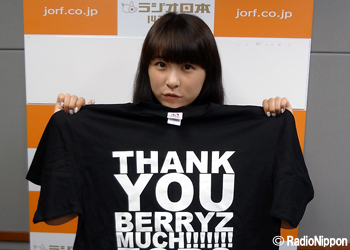 Now Yurina hates tomatoes so Kanyon now has to figure out how to be less like a tomato and more like something else. That reminds her that she asked the staff members why they chose the members that they did for this song and they said it was because it was two pairs that looked like there was no mutual affection: Kanyon and Yurina, Fukuchan and Momochi. It was a little sad because she thought they had been picked because they were strong performers, aww. However, there are sections of the choreography where they hold hands and their eyes meet, which made her extremely nervous. Meimi thinks that Kanyon asked the choreographers to put more of those parts into the dance for her. Kanyon says she thought about it, but didn’t. She will treasure the DVD release.

Meimi reminds her that the next round of Hello!Cons will be the last for Berryz so she should ask for a duet between her and Yurina. Kanyon would love that, but she doesn’t think that the Berryz fans would care for that too much. She believes the S/mileage fans support her in her love for Yurina, but the Berryz fans don’t necessarily do. Meimi suggests that it would be okay if Yurina asked for the duet, but Kanyon says that that would never happen. Meimi informs us that Kanyon’s face is turning red, she’s embarrassed. Kanyon confirms this. 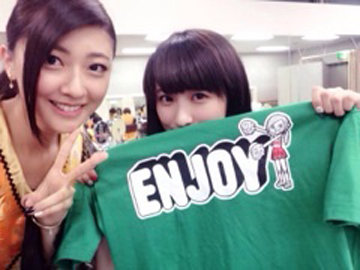 Kanyon remembers that at the rehearsal when Berryz announced their indefinite hiatus, everyone was crying, especially her, but not Berryz. She remembers that Shimizu Saki was even smiling. She sat Kanyon down and spoke with her about it. Kanyon is still struggling, because she sad and will miss them, but as a fan she realizes that this is a decision made by the members and that it has been a gift to watch over them from start to finish so it should be more of a happy occasion. She wants to be able to have fun with them and be strong, but she has no idea what she’s going to do come next spring. Meimi says she knows that Kanyon is a big fan because she always talks about seeing Berryz for the next Hello!Cons and has a huge folder of pictures of them, so it must be difficult for her. Kanyon says that she started out as a fan and they were the whole reason why she joined H!P and has used them as role models ever since so she can’t imagine what it will be like without them.

Meimi asks if there is anything in particular she has noticed about Berryz that she wouldn’t have known if she hadn’t been able to perform on stage with them. Kanyon says it’s their sense of professionalism. Even in rehearsals, if they make a mistake on the dance they do more than correct it, they power it up. She recalls the graduation of Ishimura Maiha and their performance of Bye Bye Mata Ne and how even though it was obviously very emotional and they weren’t expected to be in tune or anything, Momoko tried her best to keep a straight face and sing the song properly.

Kanyon: And now I realize that every opportunity I get to stand on stage with them is precious! Hey, it’s precious for Meimei, too.
Meimi: I know.
Kanyon: Do you, though?

Letter #1: This comes to us from Sayasayachan. They congratulate the 2nd gen on their 3rd anniversary and say that they were recently watching their Gyakushuu Mini Skirt DVD and think that they have come a very long way since then. They ask Kanyon if she remembers any particular incidents involving 2nd gen around the time that they joined. She says that one in particular that sticks out is the tour van. Typically, the more senior members get to choose their seats in a bus or van first, but this was Kanyon’s first time having any kouhai so she didn’t really know that this was the case. She said that once when they were getting in, the 2nd gen hustled in first and then the 1st gen members (there were still 4 at this time) realized that they could not sit together because of how 2nd gen had arranged themselves. 2nd gen, however, did not seem to notice. Meimi agrees that this was probably rude of them. Kanyon continues, saying that when they were on the bus they were running late so they had to eat on the way, and she really really wanted a hot dog and said as much. However, once they got the food, the 2nd gen members ate all of the hot dogs they were given and then asked her why she wasn’t eating. Meimi seems embarrassed and says that they probably should have had more manners, but Kanyon says that Meimi was actually the only one who did have manners, probably because she was already familiar with them through the stage play. This was somewhat distressing to Kanyon, though, as she was used to a young Meimi calling her “NyonNyon” and being very friendly with her, but once she joined the group she seemed very distant and would use polite language with her instead of more casual.

Kanyon: It made me sad so I said, “You can be casual, you can call me NyonNyon.” And right then, you said, “… is it okay?” and I said, “Of course,” and you immediately responded with, “Got it! NyonNyon!”
Meimi: (laughs) But then, afterwards, we had an event that day, and the managers got really mad at me and told me that I absolutely couldn’t call you NyonNyon or Nyon-sama on stage. They got so mad in the car!

But, in the end, Meimi and the other 2nd gen have grown substantially, both in terms of performance skills and in manners, so all is well. 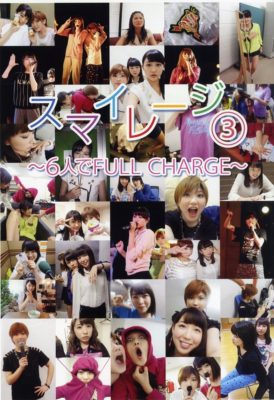 Letter #2: The next one is from Oyamada. They just bought S/mileage 3 ~Rokunin de Full Charge~ and love all of the backstage pictures. They said that they really captured the atmosphere backstage and it always looks like such fun in their blogs, in MV making-ofs, and so on. They want to know what the members like to do to have fun together and which picture they like in the photobook. Kanyon says that what she likes most is roller coasters, particularly riding roller coasters over and over. If left to her own devices, she will ride any given roller coaster 10 times or more. If she has a partner, she will request that they give her piggyback rides between trips on the coaster. That does not sit well with Meimi, who says that thinking about that makes her feel sick. Kanyon says they should go today because she hasn’t been to an amusement park in a while. Meimi says that having fun and going out is very important to her. Her heart feels tired if she goes for a long time without it (and sleeping). She says she doesn’t get much time to go out or do anything big so she has to make do with little things, like at a hotel recently. There was a convenience store near the hotel which she went to and bought bubbles. She wanted to just run up and down the halls and blow bubbles but she understood that some of the other guests might not enjoy the ruckus, so she went to the room of Takechan and Rinapuu and just blew bubbles at them. She said it was a lot of fun.

As for the photobook, Kanyon says that her favorite shot is the one of them playing Badminton in the halls. She sometimes plays it at school, but there they have big courts and she honestly prefers a smaller space like a dressing room. She is also known to sometimes play catch backstage. Meimi says she enjoys this photobook because they got to make it themselves and Kanyon says she wanted to make one like this for a while, but they both want to do more of a real photobook so for the past year they’ve been trying to plan informal photoshoots between them. They are both very good at taking pictures of one another, they claim, and they went to Harajuku and Shibuya before to get some cute things to wear for such a shoot, but since then they have been exceptionally busy and have had no opportunities to go out and take pictures. Kanyon hopes that someday they can all put out a real photobook like they did when they were just 4 members.

So that’s all for Marotesque station. Kanyon really wants to steal this radio show from the 2nd gen members. She has made this clear many times. We will see what happens with that.