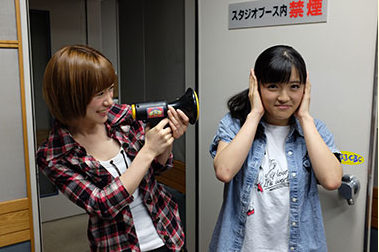 Message 1: “It seems sudden but, Erina’s 17th year is almost over, huh? Therefore a have a question for Erina, how was being 17? Please tell us!”

“What am I supposed to say?” Erina wonders. To start, Kanon mentions that “Seventeen” is used a lot in music and, as such, it has a lot of emphasis attached to it. Erina recalls going to a summer festival in Tokyo shortly after turning 17. During the festival she thought something along the lines of “I’ll only be here once,” (as a 17 year old anyhow). With that, Erina thinks she experienced things this year with that thought in mind. With that, she started carefully planning her songs for her 18th birthday event, since it is something of greater meaning to her now.

Message 2: “During the GRADATION tour, the two stood next to each other while you sang Namidacchi. You two were arm in arm with Ayumi and Haruka and it looked like you were enjoying yourselves. When I saw the concert in Nagoya, I thought I saw you go in for a kiss, I wasn’t sure if it was just an attempt or what. I can’t sleep until I find out the truth of this situation!”

Kanon is immediately concerned for the sender, since they sent this about a week ago.Erina assures the sender it’s nothing to lose sleep over. First off, they weren’t trying to kiss or anything. To further this thought, the two protest in near unison saying they didn’t want to and weren’t going to, laughing. They try to decipher what it was the sender saw and think maybe they just saw one of them move their head under the other. Also, Erina defends herself, saying she isn’t the kissing type anyway, saying that’s more of Haruna’s thing. As determined last week, they really don’t have that close of a relationship, Kanon reiterates. What is more likely to happen, is that they would make eye contact with one another and joke around during a performance. Moving on, they point out that during Maria’s part in Joshi Kashimashi Monogatari, the two stand together, mimicking baseball movements. They have many parts where they stand near each other in GRADATION, actually. meaning many times for potential eye contact. While Kanon thinks they met many times, Erina thinks the opposite, saying that Kanon looks away every time. The two argue for a bit, each defending their side, then conclude that it’s generally difficult to make eye contact with most members. 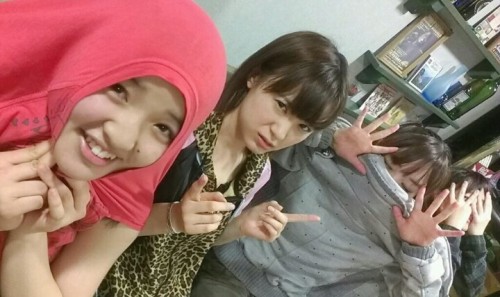 Do you really want to make eye contact with these weirdos, though?

Kanon’s Anything Best of Three

The corner where Kanon gives her best of 3 on topics as per listeners suggestion. This time, with Erina in tow.

3. Her ambitions towards dancing are strong. When other artists see them perform they are frequently impressed by Riho’s dancing. Kanon thinks it’s impressive how serious Riho is about it. As a result, she feels like she hasn’t done enough herself sometimes.  Erina adds to it saying when people will say “Riho-san is really good at dancing,” she will simply reply “Yep, I know,”. Her thought is that naturally she would know that dancing is Riho’s specialty since they’re in the same group.

2. She keeps up with trends. Specifically, with what she should be eating and the like. Erina adds that Riho really does her best with this.  Some examples of things she has caught on to are things like a one-plate lunches with primarily vegetables, putting things in mason jars, and eating oats.  These are some of the things that Rola-san, a TV personality/model recommends. She may have too much respect for Rola-san though, Erina speculates, since Riho tries pretty hard to keep up with these dietary trends. Its pretty cute though, how much she is in the know about what’s popular.

1. She becomes funny backstage. First off, Kanon thinks Riho and Erina come off as being cool on stage but are very silly backstage. Erina wonders if this is true and Kanon backs herself up, explaining that the two do things pretty spontaneously backstage. It’s a shame, since Riho is so talented in dancing, she has a cooler character, so fans generally don’t get to see her goofy side.

Then Erina takes her turn.

3. She’s very honest. If she doesn’t like somethings she will say she doesn’t like it. She doesn’t fear speaking her feelings.  Instead of thinking things can go without saying, she’ll say it. But her honesty isn’t bad, its nice, Erina thinks.

2. She doesn’t show too many emotions. Although she can be frank, even if Riho says something like “I don’t want to do that,” you don’t get the feeling of her being overly emotional about it. Erina thinks this is nice, because she can be honest without having an emotional outpour. Agreeing, Kanon thinks this is sort of good, but you have to pay closer attention to her if you want to help her out when she is stressed.

1. Keeps people in the corner of her eye. In reality, all of the 9th generation members do this with the other members. For the ideal energy balance with each other or noticing different things during dance rehearsals and the like. But, since Erina thinks she isn’t as good at it, she praises Riho for her ability.

The two with the secretly goofy ace

For this week, since Erina is the guest, Kanon lets her have a go at the sexy food word of the day. Of course, Erina messes up the first time and ends up saying it a couple times.

After, Kanon is pressured into giving it a try as well.