It may sound hard to believe, but a lot of younger women in Japan continue to wear short skirts and shorts throughout the winter, regardless of temperature. They may supplement with tights or leggings, but ultimately they’d probably be better off just wearing pants, as Kiki has discovered. She says she has forgone skirts entirely lately in favor of pants, because they keep her legs warm. Only the facts. Moving on. 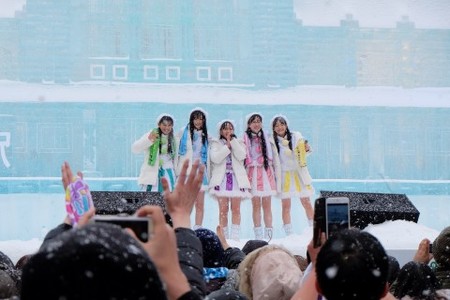 Here, idols, have a light jacket for your performance in a snowstorm. You’ll be fine.

Fan Letter #2 – This letter is from Curry Udon because it’s carrots. That is actually their Camellia name, and fittingly enough, they ask a peculiar question: what is their favorite fantasy creature? This is a turn of phrase not commonly used in casual Japanese society, I wouldn’t think, and sure enough, Kiki is confounded by the language used. Kisora answers appropriately with dragon and kappa, but Kiki… well, Kiki has never seen a kappa, so she likes dogs. Just dogs. Dogs are good. She has two. But she also likes hamsters. She actually had 3 of them growing up, which is news to Kisora. She then changes her tune, because we have switched entirely from fantasy animals to domesticated animals, and says cat.

Kisora: Well, for me, a cat.
Kiki: Ahahahaha, you hear that a lot.
Kisora: I actually never had any interest in cats, but then everyone kept saying I looked like one…
Kiki: That’s all it took?
Kisora: And so I became more aware of cats, and it’s reached a point now where I even collect cat-themed things.
Kiki: So you can really see it.
Kisora: Also, I like alpacas.
Kiki: Alpacas? They were really popular for a while.
Kisora: Yeah, but they’re fluffy, and I like animals with long hair.
Kiki: They’re so cute!
Kisora: They’re soothing. I like anything soothing.
Kiki: Actually, I just like animals. I can’t pick one.

Just not kappas. They aren’t real and Kiki will not tolerate it.

Fan Letter #3 – From Umi no Ko, they think that Kisora is just the cutest name. They’d like to know the origins of her name, or any additional stories she can tell about it. Same goes for whoever she’s with right now. Kisora is overjoyed with the compliment, Kiki less so. As the story goes, Kisora’s parents were both set on the name “Sora” for their future child. Over time, they realized that a good many children were being named Sora, and they didn’t want their child to have such a common name although they did still want to keep Sora. They then turned to the Japanese sound system and went down the line adding the different sounds to Sora to see which one fit best. Kisora worked the best, and they got the kanji by thinking of the phrase “sky full of dreams,” and went with that. Kisora thinks it’s a simple story, but Kiki thinks it’s a very unusual name that she has never heard before. Kisora says that the kanji for her name are actually used for the name Noa, as well, but she’s never met someone else with the name Kisora. She would like to, however. 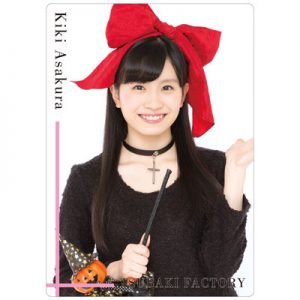 I think we all knew where Kiki’s name came from

As for Kiki? Well, her mom really liked Kiki’s Delivery Service. That is an actually simple story. Kiki thinks her name is cute, but it’s not the easiest to say, so she sometimes struggles to annunciate it when introducing herself. Kisora is not bothered by this, and insists that we all refer to the two of them as the Kikisora combo.

Time for letters is up, but thanks to the Hello!Pro pantheon we finally have a new song to play on the radio. For the first time ever, Shunrenka.

And that’s it for Kikisora. We barely knew you. Still, new partner next week, with hopefully just as many questions answered.