This week is another broadcast of highlights from the recently held public recording of the show. Nacky apologizes to the listeners for how shy she might’ve sounded during the first part: the audience were pretty much right next to her which made her a bit nervous. She gradually got used to during the latter half.

The public recording was held only a couple of days after Valentine’s Day, and as you know, Valentine’s Day just wouldn’t be Valentine’s Day without the confessions. Thus, Nacky, Maimi and Mai-chan will take this opportunity to make all sorts of confessions to the members of Hello! Project. Anything goes: doesn’t matter if they’re confessions of gratitude, repentance, complaint, or anything in-between.

Mai-chan starts: she has something she needs to confess and apologize about: there are times when she’ll forget all about Nacky’s existence. Nacky just disappears for her: she’ll push her out of the way to get out of the elevator, or cut in line right in front of her. This kind of thing is happening more and more frequently as of late. Mai-chan wants to apologize for this. Maimi, too, has noticed these kinds of unfortunate happenings befalling Nacky quite often.

Maimi, on the other hand, wants to confess to Natsuyaki Miyabi. She feels bad for having used her hairspray the other day without asking for her permission. Mai-chan doesn’t think she needs to apologize for this — she uses Maimi’s hairspray all the time without asking her. In fact, the other members of °C-ute often don’t even bother bringing their own hairspray bottles because they know Maimi will have one. The other day, Nacky was sitting in the dressing room with Chissaa who gave her orders like “Nacky, get me Leader’s eyelash curler and Airi’s mascara from their make-up pouches.” Borrowing each others’ things without asking is the norm in °C-ute.

END_OF_DOCUMENT_TOKEN_TO_BE_REPLACED 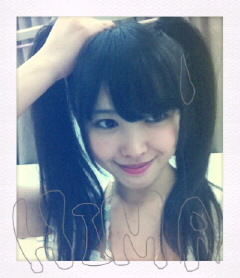