Momoko was just promoting Country Girls’ newly released song, Itooshikutte Gomen ne. Anyway, they start with a very brief outline of the history of Hello! Project: H!P started in 1998 with the debut of Heike Michiyo and Morning Musume。, and after 17 years, Hello! Project is now a bastion of various groups.

Maimi and Momoko joined thirteen years ago in 2002 as the H!P Kids, and have now spent over half their life in H!P. Mizuki remembers watching the H!P Kids auditions when she was about 5 or 6 years old, still in kindergarten. She had been too young to apply for the auditions herself, as applicants were required to be in primary school.

Mizuki’s inclusion came as a surprise to everyone including herself, as Tsunku♂-san suddenly called out her name from the ranks of the Eggs. What she remembers the most about that time was seeing all of Berryz Kobo standing and applauding her acceptance into Morning Musume。 as she descended the stairs to the front of the stage. ℃-ute themselves were backstage, but Mizuki remembers being congratulated and hugged by them.

And we come to the present, where Mizuki is currently Morning Musume。´15 leader. Over the past few months, H!P has undergone an almost complete change, with the addition of many new members and group name changes.

Momoko herself is now working with 5 new members. There’s a 10 year age gap between Momoko and the youngest, Ozeki Mai, and Momoko initially had worries about being able to hold even a normal conversation. In the end, she never really felt the generation gap. Apparently there hasn’t been much change in the things that were in vogue when she was in primary school. So she didn’t really face much hardships and enjoyed herself. Though it might be possible that the new members could still be nervous and might be harbouring some hardships about their situation.

There are some advantages, like Momoko gets first pick for boxed lunches. She usually wouldn’t pay much heed to the system and would suggest that they play rock-paper-scissors instead to figure out who gets first pick. But sometimes Momoko will let herself be childish and call dibs on the ebi-furai.

Momoko: It’s like they open the seat of honour for me.
Mizuki: That’s amazing! For us, Maachan goes and sits there from the start. 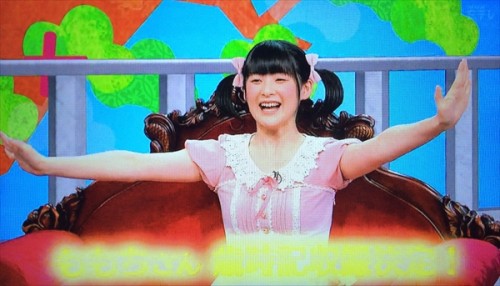 In the seat of honour

Recently, it’s been popular to ask the members who their favourite senpai is – or at least, that’s what Mizuki has been asking other H!P members. Maimi turns the question on its head: What led to Mizuki liking Momoko?

Mizuki reveals that it was Momoko’s hair style, an admission that surprises Maimi. It wasn’t just the Momochi Musubi, but Momoko was cute even with her hair done half-up when she was small. That eventually led Mizuki to liking Momoko’s personality, her singing, her dancing – everything about Momoko.

Before, Momoko didn’t know how to respond when someone said something like that. But now, she’s in a position where she has to teach things to people. As it wouldn’t be proper for her to teach something that she hadn’t mastered herself, it’s spurred her on to become a capable senpai. She finds it somewhat restricting though, as she has to get things down properly before she can give advice.

As for Maimi’s answer to the topic of the charms of the current Hello! Project, it’s that they suddenly became fresh. Maimi’s currently 23, which makes her, along with Momoko, one of the oldest. Then came an influx of young and sprightly teens, filling H!P with freshness. They’re all innocent and working hard at what they can’t do, so Maimi would like to support them and see how they develop in the future. 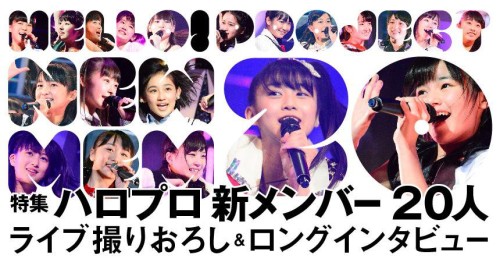 Mizuki: Well, I’m having so much fun, so ‘Gomennasai ne~’.
*applause*
Momoko: Thank you for the promotion. I hope it sells well.

The Middle Management ~Josei Chuukan Kanrishoku~ is ℃-ute’s first triple A, with Gamusha LIFE and Tsugi no Kado wo Magare making up the other songs. While Tsunku♂ had been masterminding ℃-ute’s songs up to then, these songs had all been provided by different people.

The lyrics to Gamusha LIFE were written by Shock Eye from Shounan no Kaze. The song came to life through the TV programme music-ru, where Shock Eye was a student music writer. While Tsugi no Kado wo Magare was composed by Nakajima Takui. It’s in a completely different genre, and it’s a song that Maimi enjoys singing.

This also makes up part of the spring release rush, with ℃-ute’s triple A-side released on the first of April, Juice=Juice’s newest single released a week after on the 8th, and finally Morning Musume。´15’s latest on the 15th. Not to forget Country Girls’ major debut single, which went on sale at the end of March.

Had you gone to their previous winter Hello! Cons, you would have already had the opportunity to listen to these new songs. Mizuki thinks that this past Hello! Con was a historical one, a special one that was different from the others. It was a tour that heavily featured Berryz Kobo, being their final Hello! Con.

Momoko has one regret though – Berryz Kobo were pumped up for the concerts because it would be their last Hello! Con, but at the final performance in Osaka, Momoko was hit by a high fever and couldn’t join in. All she could do was listen to stories from that concert, one of which was of Mizuki wearing a Momochi badge when she performed on-stage. While she has a regretful memory of missing that Hello! Con performance, she’s grateful that she recovered by the time 3rd March rolled around. 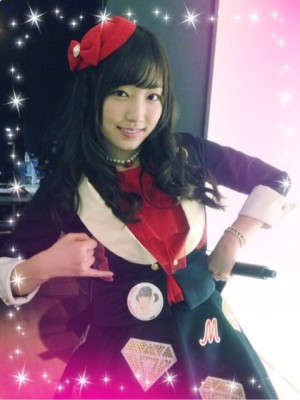 Switching topics: Among the places they visited during the Hello! Cons, what left the biggest impression on them? Maimi picks Osaka. ℃-ute arrived at Osaka earlier than the others, and the 5 of them took the opportunity to go sightseeing at Osaka’s many famous places – Tsuutenkaku, where Billiken is at, and Osaka castle, which Maimi had been to before.

For Mizuki, it was visiting the hometowns of various members through the many prefectures the tour stopped at. There’s a special kind of nervousness that the members get when they’re doing a hometown performance. Plus, it also means that they get gifts from all over. With the influx of new members, there’s even more hometowns for them to drop by at.

That’s not something that Maimi or Momoko have had much experience of – one of the requirements for the H!P Kids was the ability to commute to the city, which ended up with the Kids hailing from the Kanto area, lacking members from other parts of the country. So Maimi and Momoko are grateful to Morning Musume。 for letting them feel the hometown concert vibe.

Mizuki: I’m from Tokyo though… 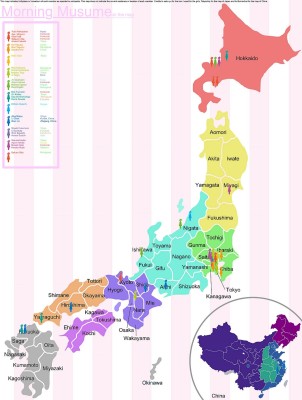 Morning Musume。  by prefecture, up to 11th gen, credit to tru_harmony. For a H!P alternative, here’s a more comprehensive, updated H!P one in Japanese.

So how was the very first episode of the programme? Momoko’s happy that she was invited to this first broadcast, and wonders how the programme will eventually turn out to be like. As for Mizuki, she was nervous to chair the programme. She wonders who’ll be the next Musume to MC the programme, and what sort of member combinations would be appearing on the programme next.