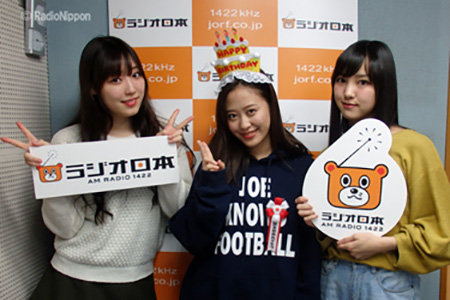 The first letters come from two listeners who will be starting senior high school. But they are shy, so do the girls have any suggestions for making friends? Any methods to leave a good first impression?

Oda-chan adds that smiling is something that has to be practised. She recommends the listener practice smiling in front of the mirror. Not to look cute, but to have a smile that makes people think ‘This person must have an enjoyable life’.

Mizuki thinks that it’s important to talk about hobbies or what she’s good at. Since everyone’s strangers, it’s key to look for common points. That’ll end up letting her find people with the same hobbies.

Or she could become someone who always talks on and on about their favourite food. There’s always one in each class.

It gives people something besides their names to remember them by. And tone of voice is important as well, so keep it cheerful. Perhaps they could try befriending fellow shy people. 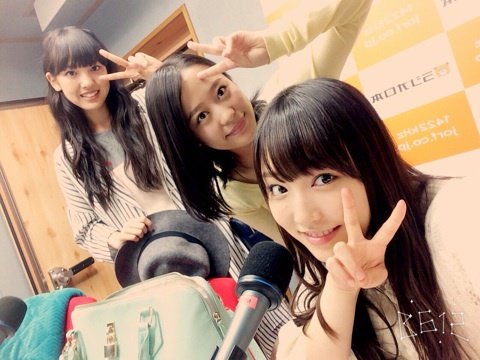 The next letter recounts a recent story: Iikubo had introduced Ogata-chan to a pizza place. Haachin later went to the same store again by herself. However, she wrote that it had been more fun and delicious when she went with Iikubo-san. This put Iikubo in high spirits, and she quickly set up plans to go out again with Ogata-chan.

Do the girls have any other stories to share, where they had been so easy to please like Iikubo had been?

After a bit of teasing about how easily Iikubo got hooked by Haachin, Oda-chan admits that she thinks she’s really easy to please. If a kouhai smiles at her, she’ll start thinking that that kouhai is really cute. Or if some entertainer says that they like Morning Musume。, she’ll start looking up information about that entertainer. If it’s a singer, she’ll start liking their songs.

ReiRei is someone who knows how to twirl Iikubo around her little finger. When they were gathering together for the pre-show cheer at the Hello!Cons, ReiRei was next to her and asked Iikubo to feel up her butt.

Well, they had been talking about how muscular ReiRei was, so it was to show how firm her butt was. Iikubo got to touch ReiRei’s upper arms as well, which got pretty firm when ReiRei put in some power.

Oda-chan: Iikubo-san, you had a dangerous look on your face when you were talking about getting to touch her!

Oda-chan: I think that would make anyone happy, even if you weren’t easily pleased.

And one more thing – she met Tsugunaga-san at the spring tour rehearsals. Momochi showed Fuku-chan the setlist for her birthday event and asked Fuku-chan what she thought.

Fuku-chan: I was like this song’s good, and so is this one, and that one. And then she said ‘You really understand the fans’ feelings!‘ I was on cloud nine.
Oda-chan: When Fuku-chan came back to the rehearsal room after that, she was in quite a state. She sat next to me, going ‘Momochi-senpai talked to me ♥♪‘. (laughs)
Fuku-chan: Yeah. So when it comes to Momochi-senpai, I’m pretty easily ensnared.

Tsubaki Factory’s Asakura Kiki-chan has the same effect on Oda-chan. There was a strange sense of distance between them at first, so Oda-chan thought that she should make the first move. After that, they did an Hello! Sute episode together. At the next Hello! Con, Kiki-chan ran up to her to thank Oda-chan for the show. Oda-chan was curious about why Kiki-chan was so thankful, and Kiki-chan replied that she had a lot of fun. That made them grow close.

The girls liken Kiki-chan to a small animal. The first time Fuku-chan met Kiki-chan, she found Kiki-chan to be like a puppy. Mizuki got close to Kiki-chan at the recent Hello! Con, and Kiki-chan has been hugging her. Fuku-chan wishes she could take her back and raise her like a pet.

Oda-chan brings the topic back to Rei-chan. Iikubo has said that she actually likes Country Girls’ Morito Chisaki-chan, so the Kobushi members have told Rei-chan not to keep her hopes up. That’s made Rei-chan worried about the current situation.

So what’s up with this? Oda-chan and Fuku-chan press Iikubo for an answer. Well, she’s happy about it. ReiRei had been next to her when they were gathering up, and Fujidon had called Rei-chan to come next to her. Rei-chan got all jealous, making a request of Iikubo: ‘Iikubo-san, do you mind not going next to Morito-chan?‘

Oda-chan: Aww, she’s so jealous!!!
Iikubo: She was so cute!!! That was the happiest day of the year for me. (laughs)
Oda-chan: But when it comes to Chii-chan, there is a sense of rivalry there.
Iikubo: Eh? That’s so cute~
Fuku-chan: Did you see Harunan’s blog post on Chii-chan’s birthday?
Oda-chan: That was crazy! That would make anyone jealous.
Iikubo: Ooh, she’s so cute.

Iikubo would like to someday make a blog post which has a picture of her hugging ReiRei and Chii-chan. 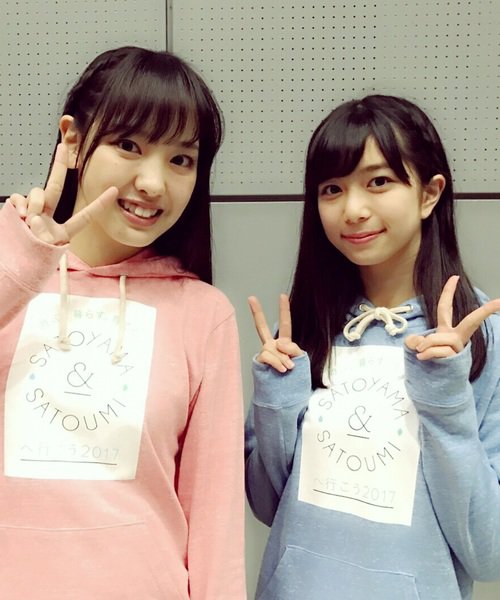