Fan mail #1: The listener congratulates the hosts for this show now having been on the air for a full year! On the very first episode, Kame talked about how she had matured somewhat: on their previous radio show together, Kame would only receive a one-page script per episode whereas Gaki-san always got the full version. Beginning with the this show, however, Kame started receiving the full version as well. Now that a year has passed, the listener wishes to know if Kame continues to get the same script as Gaki-san.

Kame says that, “in a sense” she now receives a bit less: the version of the script that Gaki-san receives is in a bigger font so as to allow her to make notes and such. Meanwhile, Kame prefers a really small font so everything can fit on a single A4 sheet of paper. In any case, the hosts are happy about the show’s first birthday. Gaki-san remembers how, back when it was still starting, Kame would interrupt her reading of the show’s email address with her pointless mumbling. These days, however, Kame will often say actual words instead.

Which reminds Gaki-san: some time ago, they were in the car listening to the episode where Kame suddenly did her “disgusting moaning” — twice. This apparently made Gaki-san’s dad, who was in the car with her, quite worried about Kame. With that said: the two happily agree to keep doing their best towards the show’s second birthday and beyond!

Fan mail #2: This question — from radio name “Purple Hero” — is in regards to the group’s upcoming stage play, Fashionable, which is set in the clothing industry. The listener’s problem is: he hates it when he’s shopping for clothes and someone will approach him to ask if he’s looking for something in particular. He wonders: is there any way one can escape being asked this question by the store staff?

While the hosts do understand the listener’s dilemma to an extent, Kame has a hard time accepting it… because of the listener’s radio name. “Just what kind of a hero are you?!,” Kame asks, waving her fist in the air. “Aren’t you supposed to be a defender of justice?!” Gaki-san, however, defends the listener: “even heroes have days when they don’t want anyone talking to them!“

Kame is actually quite honest with the shop assistants when they approach her like that. Most times, she’ll simply say she’s not quite sure what she’s looking for and she just asks them for their recommendations. “This makes shopping really fun!,” she explains. 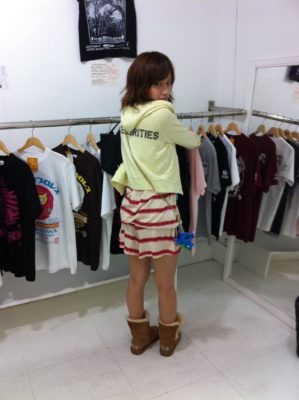 Fan mail #3: Short and sweet: the listener wishes to know the hosts’ favorite phrases they find themselves saying a lot out of habit.

Recently, Kame finds herself pointing it out when other people mistakenly use the phrase “gyaku ni” (“on the contrary“) — that is, when they’re not saying anything contradictory in the least. “Argh, it’s so freaking annoying when you do that!,” Gaki-san cries. But, funnily enough, Kame admits that she herself is probably the biggest user of the word “gyaku ni” when there’s really no reason at all for her to be saying it.

Gaki-san was recently looking at a pamphlet she received in the mail from Disney (she’s a member of the fan club), and her mom pointed out how she was repeatedly going “nani kore~?!” (“what is this?!“) as she was reading it. She thinks that may be her phrase of choice.

Fan mail #4: The listener has an announcement to make. “The other day I confessed to the person I like and…” (Gaki-san: “Oh!?“) “… they turned me down.” (“Gaki-san: “Ah…“) Having known this person — one year their senior — for the past six months, the listener still feels quite in-shock because of this event. However, they seem to be incapable of forgetting about this girl! Thus, the question is: should he give up on this love or not? Do girls hate it when boys just keep coming at them, even after they’ve been turned down?

Gaki-san: Would you ever say “OK” to a guy who confessed to you a second time after you had already turned him down once?
Kame: Well, this person poses the question like, “do girls hate it when…“, as if all girls were the same. But that’s really not the case at all, don’t you think?
Gaki-san: Well, sure. But what about you personally?
Kame: I think I wouldn’t like it if that person didn’t get where I was coming from when I turned them down in the first place. If I very politely and clearly told them “no,” while taking into consideration both that person’s feelings as well as my own…? I mean, if I made some kind of a mistake; if I didn’t convey my thoughts properly to that person? I could admit it if I was I was in the wrong. But I’m saying, if I had already successfully made my feelings perfectly clear to them, and they kept coming anyway? Well… I’d go, “alright, that’s it then. I guess we can’t even be friends. Goodbye.”
Gaki-san: (laughs) Nice! I didn’t expect you to be so firm in your stance.
Kame: Well, I am an adult after all… ♪

Gaki-san, too, has to be honest: she might be turned off if the same guy kept confessing to her over and over again. If, however, there was a period of time — say, six months or so — when nothing happened between them and the guy confessed again, it might make her look at him in a new light. “Oh, so he kept thinking of me even these past six months.” What might help his chances even further was if he’d undergone some sort of an “image change” within time — it might make him look cooler than before.

Gaki-san: But… Alright, listen. Here’s the deal. You never know! You never know what awaits you. Maybe this girl will feel differently in the future. Or maybe you’ll give up and fall in love with someone else or something. Just let us know what happens! It’s going to be fine! Surely there’s someone out there just for you! One day, kami-sama (God) will–
Kame: Kame-sama?!
Gaki-san: Kami-sama! Why the hell would I be saying “Kame-sama“?! (laughs) 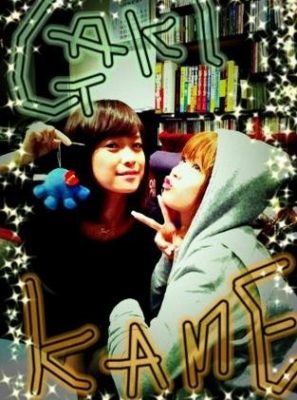 Fan mail #5: The listener, a guy who is turning 20 this year, recently moved to Tokyo in pursuit of their dream of becoming a singer. He says he’s always looking at Morning Musume’s cool live performances for reference. What he wants to know is: what are the songs that make them the most exhausted to perform?

Kame: I have one!
Gaki-san: Me too! Let’s  say it on the count of three and see if we have a match. Ready, go…
Kame & Gaki-san: Koko ni Iruzee! Yaaay!

As fans might know, everyone gets intensely fired-up during this song. Gaki-san points out that this holds true not just for the audience, but the people performing the song, too. Kame notes that “Koko ni Iruzee!” usually comes right at the end of the concert, which means everyone is already 100% warmed-up. The members will be losing their breath, they’re having trouble even standing up… but it’s so fun that somehow they always manage to get through it.

Gaki-san: We’re waiting for your messages! Go ahead and ask us anything, such as “where is Kame’s reset button?” Anything goes!