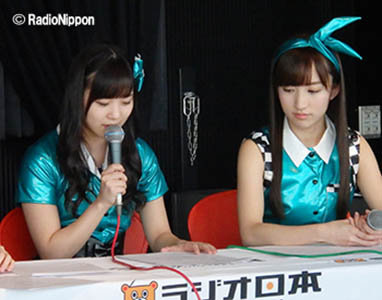 Risa and Manaka continue to be the hosts for this episode. This time around, the girls would like to get through as many listener messages as possible.

About a year has passed since their major debut, so the first message asks if there was anything they did secretly at the time of their debut, like going to the CD shop and confirming with their own eyes that their CD was on sale?

Chii-chan did go to the CD shop, but she also went and took a photo with the large billboard that had been set up at Shibuya. Mai and Risa-chan actually did the very same thing. The girls are grateful that such a huge billboard had been set up for their debut single.

When their CD was on sale at the CD shops, Risa noticed that the CDs were arranged in the racks in such a way where you could only see their title. Risa would then ‘adjust’ how the CDs were arranged, moving them off-centre, so that you could see the whole cover instead, as she thought that it’d be better with their faces visible. Momochi admits to having done something on those lines for her photo books as well. Manakan thinks that it might be effective, and perhaps the Country Girls should all give it a go next time?

Middle schooler Mai wrote ‘Give my major debut single a listen, ok?‘ on the blackboard of her classroom. Her classmates were like ‘Is that so? Good luck!‘ The other girls are somewhat stunned by this revelation: surely someone would find it apprehensive? Mai insists that her classmates are kind people, and are supportive of her. (Risa: ‘They’re quite tolerant, aren’t they?‘) Manakan suspects that some of them might be insincere, though Momochi-senpai thinks that her classmates will probably think of it as an memorable, amusing incident. 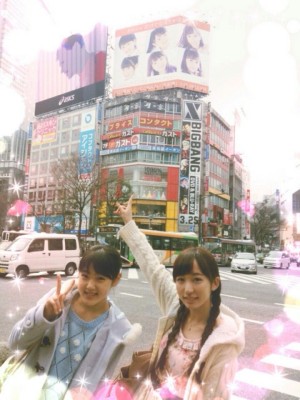 The next message asks the girls about how they deal with nervousness before events such as concerts and television appearances. Do they have any tips or tricks for this listener, who gets nervous when they have to do things in front of people?

Chiitan has heard that if you get a good strike on your back, it’ll get the adrenalin pumping, which eases nervousness. So she tries to hit herself in the back, but it’s usually ineffective as she can’t get the proper leverage to give herself a good WHACK. She’d like it if someone would perform it on her, but she doesn’t want to bother the others by asking for help, since they’re probably nervous as well. So she tries (unsuccessfully) to perform it on her own.

Yamaki has actually noticed Chiitan do this, and once offered to help her out. However, Yamaki thought that Chii wanted some sort of light massage, so she gave Chiitan a light tap, ignorant to the fact that she was supposed to strike hard. Chii told her that it was fine to hit harder, and received another light tap. Realising that there wasn’t any point in prolonging it any further, Chii just thanked Risa for her ‘help’.

Manakan thinks that it’s a good idea. Maybe next time they should make a circle, and do it to one another? Momochi suspects that if they did that, whoever would be in charge of delivering the blow to her would probably be very careful, and Momochi’d end up just receiving a soft touch.

Funakki reveals that she can deal with nervousness just by repeatedly telling herself not to get nervous. She persuades her own mind to relax. It’s kind of like self-hypnotism. (Manakan: ‘Amazing… You’re just 13 years old and you can already do something like that…‘)

Yamaki wonders if someone whose career has spanned 13 years has found a method to deal with nervousness?

Momochi: Me? This is what I’d like to tell all of you: What you have to do in order to not to be nervous is practice. With sufficient practice, you’ll know that you’ll be fine. That confidence will prevent you from getting nervous. In other words, nervousness means that you’re lacking in practice, okay?

Momochi: And as for myself, today, I’m nervous.

Manakan: (laughing) All the persuasiveness you had just went out the window~

Yamaki: You mean to say that you’re lacking in practice?

Momochi: That’s right! Since I can’t listen to this show every week because of work.

Yamaki: From now on, if Momochi-senpai’s nervous, it means that she lacks practice.

Momochi: Risa-chan, you’ve become better at finding faults with people in this one year, haven’t you? Your growth has been remarkable.

Yamaki: Ah, I was told that I’ve grown. 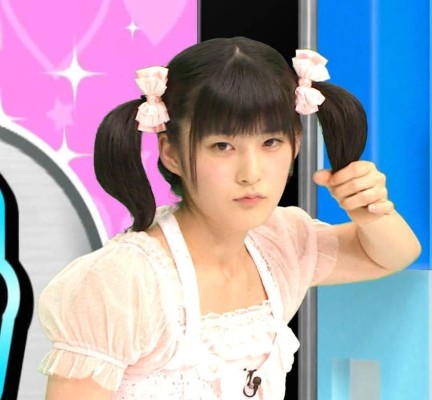 Not enough practice? Momochi’ll give you a hit to your back to get the adrenalin pumping

Next question asks whether the members have any verbal tics. Yanamin says that she’ll often go ‘Yoisho‘, which is basically what old dudes say when they flop onto or get out of a couch. And whenever she bumps into something, she’ll go ‘ouch‘ even if it doesn’t hurt.

However, it looks like she didn’t respond when someone gave her a light tap during the recording, as Momochi calls her bluff – could it just have been something that she cooked up? It sounds like someone tried again, as she goes ‘ouch‘ after denying that it’s made up. But the others are already on to her – her response seemed too deliberate.

Suddenly going off track, Momochi asks why Yanamin’s eyebrows are shaped like the Japanese numeral for ‘eight’ (八), which makes her look worried. Momochi-senpai’s choice of ‘eight’ rather than the katakana ‘ha’ (ハ) has the girls in stitches, as they begin to imagine Yanamin with a figure 8 for eyebrows. The girls are so caught up in laughing that Momochi has to remind them that they’re on a radio programme.

Coming back to the topic of verbal tics, Manakan uses ‘shitakke‘, which is the Hokkaido version of ‘And so’. Another Hokkaido-ism Manakan has is that she calls Fukujinzuke ‘FukuSHInzuke‘ – the members commented on this so much that she actually called her mother and put her on the phone speakers to confirm that yes, she had been brought up pronouncing it that way. She’d never noticed the depths of her own accent. 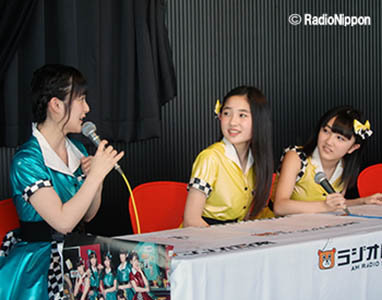 And here we are at the ending. The girls wrap up by giving us their thoughts on this special broadcast.

Yamaki: Today is the first recording with done with all seven of us. Usually, the mood gets excited even when there’s just a few of us, but here, you could really see that the excitement increased proportionally. I really had fun, and it would be great if we could do this again.

Inaba: I really enjoyed myself as well, today, broadcasting from Tokyo Tower’s viewing platform like this, the view is really nice. Even when we’re talking, we’re all smiles, we’re enjoying it even more than usual, and there were funny parts as well. (Momochi: ‘Like the figure 8? Yanamin, we’re talking about the kanji version‘ Inaba: ‘(laughing) Yup, like that‘ Yamaki: ‘Not the ∞ symbol!‘) Anyway, it was tons of fun, and perhaps if something sad happens, then I’d like to think back to the figure 8 and laugh (laughs).

Morito: It definitely gets really funny with Momochi-senpai around. I’m really happy. I laughed a lot today, and enjoyed myself. Opportunities to do public recordings are pretty rare, and it really feels good to hold one in such a wide open space.

Ozeki: The long-dreamed of appearance of Momochi-senpai on Country Girls Tadaima Radio Housouchuu has finally come true. Ever since a year ago, I’ve been wondering when the time would come for Momochi-senpai to come along- (Momochi: ‘You weren’t doing this yet one year ago, right?‘) Or at least, my thoughts were on those lines, so this recording filled me with happiness. Plus, there’s the seven of us, all of us are here, which makes me happy as well. I hope that you’ll cheer this programme on even in its second year. Thank you very much.

Yanagawa: I’ve only been on several radio recordings, and they feel fresh to me every time. And today, seeing this invigorating view brings out a really fresh feeling. It was a lot of fun to do a recording with the seven of us chatting up a storm. Thank you very much.

Funaki: This is my second time on Country Girls Tadaima Radio Housouchuu, and I’m extremely inexperienced, but for my second time to be this amazing, at Tokyo Tower’s viewing platform, with a really beautiful view ahead of me, I feel that it’s a really valuable experience. I really enjoyed myself today. I’m looking forward to when the listeners get to listen it, and I’ll listen to it again too. Thank you very much.

Momochi: Being able to appear on this radio show after having listened to it every week… (The members kick up a storm, calling her bluff) Shush, there are people who’ve only just tuned in (laughs) (Yamaki: ‘(laughing) That’s playing sneaky!‘) Well, while that might have been untrue, truth be told, I’m happy that I got to appear on this show, particularly with the four of you plus the two new members, getting to talk in detail with you, making excuses (Yamaki: ‘Excuses? (laughs)‘) Watching you makes me really feel happy, and maybe you could say that it’s from a parent’s point of view. Everyone’s really at ease, so I think that you’re possibly enjoying yourselves with the play practices. Well, at today’s new song promotion corner, who would have guessed that the new members would beat the original members? So there were embarrassing experiences as well, but we celebrated my birthday, so it’s been a wonderful day. Thank you very much.

And it’s time to part. Yamaki hopes that they’ll be able to do another recording at Tokyo Tower, as well as a recording with all seven members again.

Yamaki: Country Girls is the best. And with that, everyone…