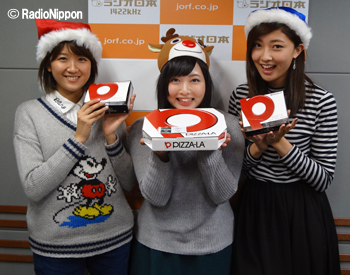 Chii reveals that they actually ate some of the pizza before the recording began, and as it so happens, there are now only two slices of it left. This calls for an immediate battle of rock-paper-scissors which Kumai-san promptly loses.

So how was 2014? For Kumai-san, time just flew by so fast, each day felt like it was over in a mere second. Maasa thought it was a big year for Berryz Koubou, what with their 10th anniversary, spring tour, hiatus announcement, Budokan, bus tour, and autumn tour. “And France, too!“, Kumai-san points out. Chii thought 2014 was overall just really fun. When asked by Maasa to specify what exactly she thought was so fun about it, Chii names “getting to eat so much pizza” for one thing.

What follows is around ten minutes of ramble and sounds of people munching on pizza.

Fan mail: This will be the last winter for Berryz Koubou as a group, and the listener thus wants to know if there are plans for the members to spend Christmas or New Year’s together.

For Chii, the main thing she wants to know is: are Berryz doing the Christmas present exchange this year? Nothing has been set in stone yet, and Chii suggests that they should at least decide right here and now what the three of them are going to do. But Maasa has an even better idea: she’ll just message the other four on LINE right now and get their opinions on it.

Maasa sends the message and the three talk about the history of gift-giving within Berryz. They did a present exchange last Christmas, but before that, they’d only done so once before, back when they were little kids — back when there was an agreement that all presents had to be 500 yen or less. Some minutes pass and Maasa says there’s still no response from anyone in the LINE group. Kumai-san does something sneaky in order to push everyone in the right direction: she sends a message to the group saying she likes the idea of the gift exchange.

Near the end of the show they finally receive some responses to their burning question. Unfortunately, the general consensus seems to be along the lines of “whatever.”

Christmas 2013: Maasa was also a guest on the show a year earlier