Nonaka starts off by mentioning that there are just so many new members in this concert. Ogata adds that when they were at the Morning Musume auditions, they didn’t know who would make it or not, so being able to see other girls from the auditions again like this is really amazing. Because there are manygirls who joined Hello! Project at the same time, they have a lot of rival, but they want to hang out with all the other new girls a lot. They also would really love to do songs as the “new members” with them.

Ogata then moves on to the acrobatics in the second pattern of the concert. They are just beyond cool. Both of them are really beyond words on this one. Nonaka talks about how the aura of the girls in it is just amazing.

As for “Senpai Stories” Ogata has one. In ANGERME and in Juice=Juice there are other members from Osaka (Kana Nakanishi and Akari Uemura) and Ogata has been able to talk to them a lot. And of course when the three of them talk together it’s all in Osaka-ben. Nonaka laughs in surprise. This is mostly because Uemura rarely speaks Osaka-ben, and has this image of someone who speaks standard Japanese instead..

Ogata is really happy, though, because when they talk together, Uemura will use Osaka-ben with her. It’s a lot of fun.

Nonaka: Ah, I want to hear it. The three of you speaking in Osaka-ben.

Ogata changes the subject and asks if Nonaka has messed up at all at the concerts. Nonaka answers that the size of the stage really surprised her. She has danced on stages before, so it had been a long time since the size of a stage has surprised her. Then on top of that, there are the formation dances. Nonaka is really paranoid about getting things right and being where she’s supposed to be. Ogata offers her sympathy before going into her own take on it.

Ogata, as is known, used to be a figure skater. When she was performing as a skater she was the only one with the full attention of a huge crowd. So for her, because she’s on stage with the rest of Morning Musume (instead of alone), and 12th Generation is still new and thus in the back… she’s not really all that worried. Everyone’s focus is more likely to be on Sayashi in front of her than on her. That’s why she always seems to be calm.

This reminds Nonaka of when she played the piano and she’d have piano recitals. She’d be the only one up there in front of everyone so her hands were always shaking. Ogata gets distracted by talk of piano and mentions that because her hands are large people say she should be good at piano but she really isn’t at all. Nonaka wants to hear Ogata’s piano skills.

The first mail is from Keibu?Kevin?-san:

“Hello! I caught the Dokkiri show that 12th Generation were on. You guys were the target and a lot of things happened. The part where Yoshizawa was being intimidating and everyone but one person answering her with “Yoshizawa-san” was my favourite part. Most of 12th Generation realized what they should say, but Maria answered Michishige-san. So, 12th Gen, how did you feel about your first Dokkiri?”

Nonaka: Ah, how nostalgic.
Ogata: Yeah… That Dokkiri with Yoshizawa-san… Everyone was saying “Yoshizawa-san, Yoshizawa-san”
Nonaka: Nothing but Yoshizawa-san.
Ogata: But that time we were all lined up and Maria-chan was first and I was really wondering what she was going to say.
Nonaka: Me too!
Ogata: I thought that we should probably say Yoshizawa-san as well, but then she went ahead and said Michishige-san.
Nonaka: Ah, and then when we came to Akane-chin, I thought that she would say something else as well, like maybe Kudou-san or Takagi-san.
Ogata: Ah, I was fourth out of us, which I thought was a good place to be as it would have the greatest impact just in case, but then Haga-chan ended up putting on a huge smile and saying Yoshizawa-san.
Nonaka: She did, she did. It was so adorable.

Ogata goes on to say they wondered if maybe there was a Dokkiri going on and the fact that it really had been happening is just way too amazing. And Nonaka adds that, even though technically it was their first performance, they really didn’t get to sing much at all. In hindsight, the whole thing was a lot of fun, however. They are both really happy and thankful that a show took the time to single out the 12th Generation and pull something on them. 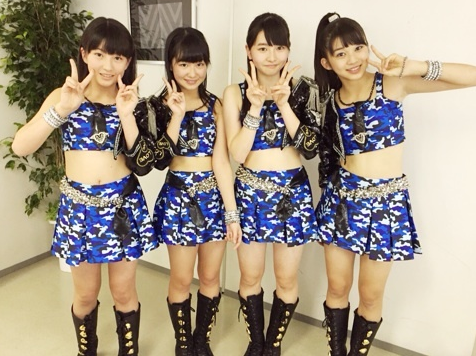 Maria might have been traumatized for life, but they all had fun!

The next mail is from Okakin-san:

“Hello! So everyone in 12th Generation comes from the countryside right? Have you been able to get used to the Tokyo life? My question is, when you came to Tokyo did you have any kind of culture shock from things being different? Thank you and I look forward to seeing how 12th Generation grows!”

Nonaka and Ogata stop for a moment and agree that indeed there’s no one from Tokyo in the 12th Generation.

For Ogata, her surprise happened in a train station on the escalator. In Osaka, everyone rides on the right side of the escalator. So when she came to Tokyo, she was confused when everyone there was riding on the left side. She didn’t know where she should stand.

Ogata: So lately I’ve just been standing in the middle
Nonaka: The most bothersome place for you to be.
Ogata: Yes, I thought that if I just annoy everyone by being in the middle it should be good.
Nonaka: Well then, I guess next time we ride the escalator together you can ride on the right and I can ride on the left.
Ogata: Super in the way~

In reality though, Nonaka had the same problem when she went to visit Kansai.

Ogata asks if Nonaka has had any Tokyo issues. Nonaka, though, comes from Shizuoka, which is so close to Tokyo that it’s not really like she’s from the countryside at all. She even thought for a long time that she spoke perfect standard Japanese. It turns out though that her intonations are a bit off, so she has a bit of a Shizuoka sound to her. Not that Ogata can really tell.

They then start going through some Shizuoka-ben. Such as “Nanchara” and “Damonde”. Although it’s not that they don’t like standard Japanese, it’s just more fun to speak in dialects. Thus Ogata will attempt to speak Shizuoka-ben to Nonaka and Nonaka will reply in Osaka-ben in turn.

Ogata then asks Nonaka what exactly “Damonde” means anyway. The reply is hesistation and silence. Apparently, although Nonaka uses it naturally, she couldn’t exactly tell you what it means, she eventually settles on a way to explain it (it’s similar to saying “because of this” or “therefore”).

Ogata: So then, what do Tokyo people say?
Nonaka: Uh…
Nonaka: I don’t actually know the answer to that.

After getting distracted again for a moment. It’s agreed upon that Akane’s way of speaking is the most standard, while Maria speaks a lot like Nonaka. Nonaka confesses that because Maria and her have incredibly similar intonations, it’s actually kind of creepy when they talk together.

They finish off the show by giving out their thoughts over how they did. Nonaka can’t help but notice that because they’re always together anyway, it was really natural. It’s just like every other time they’re together, but this time they’re wearing a headphone/microphone. Ogata would love to do another Haa-Chel show. And, of course, they shall both continue to try and be high energy for the show.

Ogata: We talked a lot didn’t we? Haa-Chel is the best!