With the new year comes a new name, not just for the group, but for the radio show, as well. In case you don’t remember what their name means, Kananan and Rinapuu drew a picture last time to represent their new name. 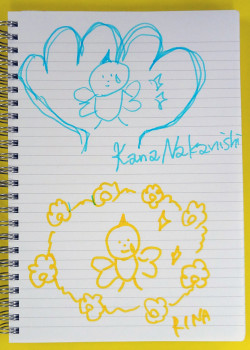 Tears of a backwards bumblebee

Ironically, when Takechan starts the show by asking Meimi how the new year is going, she says, “EVERYONE IS ANGRY!” Not over the new name, though. It turns out that recently a group text went around between the 2nd gen members about a certain problem member who did this: 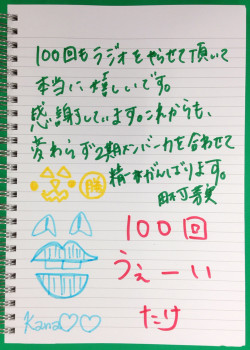 Yes, Meimi took up half the page they were given to draw on for their blog for the 100th episode of the show. Rinapuu saw this and sent it around to everyone complaining about it, but Meimi distinctly recalls being the last member to write on it, not the first, and so she was merely filling in the empty space left by the others instead hogging it all for herself. Takechan does not remember this at all, but Meimi feels relieved nonetheless to speak her peace and reclaim her good name.

Even if Takechan has no desire to be more mature in her messages, Meimi wants to become more of an adult this year. Since the group name is changing and their image is supposed to be more mature, as well, as a result, she wants to become much more suited to that image. She doesn’t want to be “S/mileage’s Tamura Meimi,” she wants to be, “ANGERME’s Tamura Meimi.” Takechan has no idea what she’s talking about. Meimi asks what Takechan wants to go for this year, and then promptly interrupts her before she can say anything. Takechan gets angry, but then when given a chance to speak, she doesn’t actually have anything in mind. 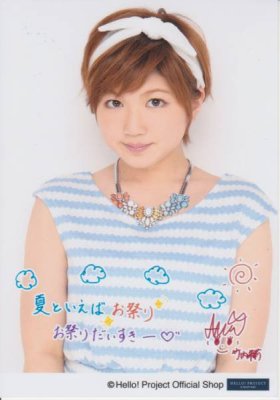 Actually, she’s been studying at school to become qualified to tutor elementary school students, but she still hasn’t reached a certain level to obtain that qualification. Meimi thinks it’s cute, but Takechan says she’s a rather strict teacher. That will be her goal for next year, to get a promotion. Just out of curiosity, Meimi asks Takechan what’s in her wallet. Takechan has nothing in her wallet, and this appears to be the standard. Meimi says that Takechan never has anything in her wallet (“Nothing but happiness,” Takechan responds), and if she ever does, it’s just a 1000 yen bill. She has never ever seen Takechan with anything bigger, so she thinks that perhaps she is secretly teaching these children on the side in order to rake in more money for herself, but Takechan defends herself, saying that it’s a free teaching position and she doesn’t get paid. This shocks Meimi, but then Takechan elaborates on what exactly a tutor does. Meimi then becomes convinced that Takechan needs to open up her own store so that she can get paid for this, but Takechan says she’s not that good. Meimi says to use Up-Front Agency’s connections and Takechan refuses because it’s a private matter, not an idol matter. Meimi thinks she can make an idol matter if she works hard enough.

The two of them proceed to discuss what they want to do with the radio this year. In general, they want to keep everything the same and just have it belong to 2nd gen, maybe have more episodes with all of 2nd gen present. Takechan says she might want to have more guest appearances, which Meimi consents to as long as they’re just guests. Oh, and definitely not the 1st gen members. This is understandable considering how the past episodes featuring Wada and Maro have gone. Other than them, Takechan would like to invite more of her H!P senpai, and Meimi, naturally, would like to do more work with going to theater companies. Takechan wants to invite Suzuki Kanon and Ishida Ayumi. Meimi wants to go to more theater companies. In case you didn’t hear her the first time.

They take a minute to promote the winter Hello!Cons, which are still going on. Meimi says that she has a number she performs and she’s the most senior member for once and it made her really happy to be more elevated in status, but her senpai-senses also kicked in and she wants everyone to see how these new members grow and change. She remembers when 9th, 10th, and 2nd gen all performed together at a Hello!Con and she has improved substantially since then, so she hopes everyone will watch the same process with these new girls. Takechan says it’s funny because when they were rehearsing in front of the mirror and could see everyone, it was really obvious who the new members were, not just in that they were less polished, but just in their aura. It’s hard to explain. They all feel more like senpai, though, and that’s cool. Also, Takechan gets to dance with the H!P dance club again this show.

Meimi asks her if she’s referring to the handsprings and stuff that they do at the beginning of the show. She’s not, because that’s called acrobatics. Meimi learned something new. In any case, Takechan thinks that people who think that this performance will be like the last time they saw the dance club, probably on The Girls Live, will be very surprised. Meimi was shocked by it. She hasn’t seen it yet, but she was definitely shocked. Takechan was in the center and had a solo and it was so intense. It was clear then that Takeuchi Akari was to become the heart and soul of Hello!Project and lead the company into the future as center alongside Sayashi Riho.

Takechan: Well, I appreciate all of those thoughts on the performance, but I’m definitely not in the center and I don’t think any of us have a solo dance section, so everyone please be aware of that.
Meimi: (whispers) It was so amazing, though. 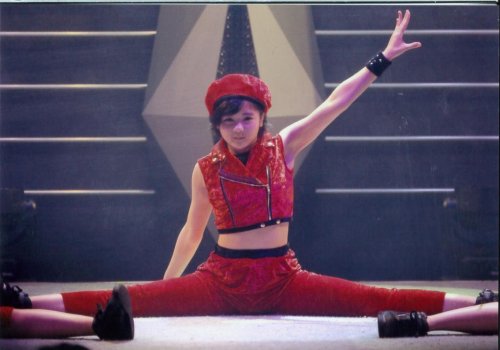 The two of them realize that much of their discussion about the fall tour has been summed up in two statements: “We’re tired,” and “We wish it could have been in bigger venues.” However, they want to assure everyone that they did in fact have a lot of fun with it and don’t regret having the tour. Takechan says her main motivation for getting bigger venues is that she feels like a lot of fans weren’t able to get tickets, but she did like being so close to everyone. Meimi agrees, as her favorite part of the tour was when they would bring the house lights up at the end of the show so that she could see everyone in the audience. Takechan has also had a lot of people, both friends and fans alike, tell her that their performances here were also some of the best, so that is some happy justification for all of their efforts.

They also discuss the announcement of the new name. Takechan is still just a little bit bitter that her suggestion, TRICK, did not get picked. Meimi thinks that this is not a good name and says it’s obvious why it didn’t get picked, but Takechan still thinks it’s good. They’re both glad, at least, that Tsunku seems more relieved now that the decision process is over, and they reflect on how much they admire him. Before the last day of the tour, Takechan sent him a message saying that the last show was tomorrow and that they’re doing okay and whatnot, and he replied saying that she’ll be fine, she just needs to believe in the music and that the performance comes from the heart, not the form. That really struck her and her whole life changed with that message. They both respect him a lot for how much he understands music and their feelings, and Meimi just comes right out and says, “I love Tsunku.” Takechan is glad that she was chosen for S/mileage by Tsunku because that reflects very highly on her. He’s the best.

Get well soon, Tsunku, and get back to harassing the group