Halloween is coming up soon, and Kumai-san says she definitely wants to dress up as something this year. Chii points out that they have a Naruchika concert in Sapporo on October 31st this year, so they’re now making plans for that day. Just in the highly unlikely off-chance that not everyone managed to attend that concert, here’s what they missed: 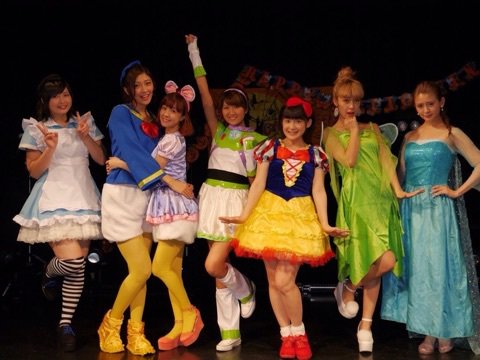 The hot topic in Chii’s mind right now is H!P and the new friends that have joined its fold; namely, the 12th generation of Morning Musume and the 3rd generation members of S/mileage (though many of them were already members of Kenshuusei, as Kumai-san points out.)

Chii claims she kind of predicted that Makino-chan would be joining Morning Musume. She remembers seeing her back during the summer Hello!Con, constantly making eye contact with her seniors and quite simply “shining” — Chii could already tell back then that Makino was an exceptional girl. Kumai-san noticed this, too, and says she has the kind of eyes that once you look at them, it’s impossible to look away. Chii points out that it’s rare for Kumai-san to say that kind of thing about anyone.

The two have high hopes for Haga-san, too, considering her Kenshuusei past.

Next up is Ogata-san, or the “Mao-chan of H!P” as Chii puts it. The two talk about how there haven’t been that many girls in H!P so far who’ve had something they could say they were really good at, and they think especially Ogata-san’s figure skating is a first. No one in Berryz has any talent like that; some would say they played the piano or were good at swimming back when they were still kids, but these days, they have nothing. “So I really feel thankful from the bottom of my heart for having been able to join Berryz Koubou,” Chii sums up.

“And then there’s my rival: Nonaka-san.” With this girl having lived in the States, Chii says Nonaka-san is pretty much on the same level of English proficiency as her. But in all seriousness, Chii heard Nonaka-san’s self-introduction at Budokan and she thought her English was so good, she had no idea what she was even saying. She found her to be in a completely different league altogether, and thus she considers her to be a serious rival.

Chii always recites a “high-level” English word at the beginning of the show for practice — today’s word was “disco,” by the way — and she feels that she needs to really get serious about it and raise the difficulty level of those words. She explains, though, that up until now she had been saying simple words just for the listeners’ sake — she figured that over half of us wouldn’t be able to understand more complicated English words. But that will now change. (If you’re curious, the challenging phrases Chii has recited in following episodes have included ones such as “I am good at English,” “I’m hungry” and “I eat a donuts.” [sic]) 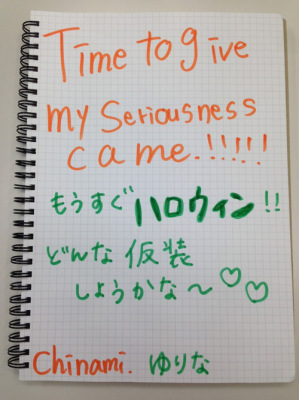 “Time to give my seriousness came.!!!!!”
Better watch out, Nonaka.

S/mileage, too, has new members: Sasaki-san, Murota-san and Aikawa-san. Kumai-san is interested in seeing in which of them will eventually go on to lead the group as they’ve all gained prior experience as Kenshuusei. For Chii, she’s always considered Sasaki-san and Murota-san as sort of rivals so she thinks it’ll be interesting to see how the two work together as a team.

Question #1: A couple of months back there was a listener who had a ramen-related problem. Specifically, to sum it up, his problem was as follows: “what’s the difference between oomori and kaedama?” They received lots of answers to this from listeners, and Chii will thus introduce one of them.

Fan answer: What it all comes down to is the thickness of the noodles. First off, the listener says they’re pretty sure that no matter if you order an oomori (large serving of noodles) or a kaedama (second serving of noodles), you’re going to get the same amount of noodles regardless.

Tonkotsu ramen — a ramen culture that favors second servings over larger servings — is different in that it comes with thinner noodles compared to most types of ramen. And even aside from tonkotsu ramen, the listener reports seeing other ramen shops that mostly always prefer second servings if they’re serving you thin noodles. This is because if you were to get an extra large bowl of ramen with thin noodles, there’s a good chance that they’d have gotten too soft near the end of your meal. Thus, to prevent this from happening, these ramen shops will offer you the option of ordering a second serving of noodles instead.

Another point the listener makes is that with tonkotsu ramen shops, if you get a second serving of noodles, you will also be presented with a special sauce to add in to prevent the taste of the soup from getting too diluted from the addition of more noodles. He offers that another reason why normal ramen shops might not offer the second serving option is because they don’t have this sauce available.

Kumai-san admits she was too busy listening to (and trying not to laugh because of) Chii reading this answer in a proper news reporter tone of voice to have really heard what she was actually saying, and Chii, too, says she was too preoccupied in reading it to have really grasped much of the meaning. “Did you all get that?“, Chii asks.

Question #2: Chii has a big problem with blogging. As you may be aware, both she and Kumai-san are not exactly the most active bloggers in the world. Chii says she actually worked pretty hard on her blog this past September and October, but this then led to fans at handshake events worriedly asking her what was wrong since she was blogging so much. But if she doesn’t blog actively, this will in turn lead to fans getting angry at her, leaving her comments like “hey, maybe it’s time to get to blogging again.” Thus, Chii doesn’t understand what she’s even supposed to do with her blog as both options will only lead to fan backlash. And so her question to the listeners is: “just how often should we blog?“

Question #3: Kumai-san, too, has a problem this week. She’s been looking into buying some autumn wear as of late, and it’s led to her wondering about the names of colors. Recently, her favorite color of clothing has been “bold,” which is a kind of deep red. But when she mentions this to other people they often don’t have any clue what color “bold” is supposed to be. Thus, she wonders what the origin of that word is. Kumai-san also doesn’t know what color “charcoal gray” is supposed to be, and how it differs from any other shade of gray. And these are the two mysteries of the week she wants you to ponder about for her sake (instead of just using Google to find out herself). 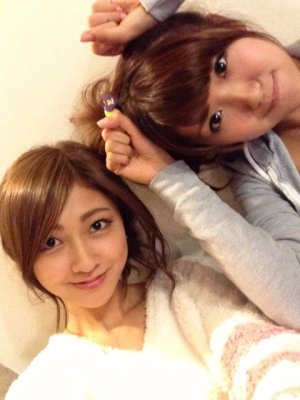 Kumai-san has a quick story to tell about a scary lady she recently met on her commute. Kumai-san was just sitting down in the train and she was sleepy, so she started nodding off. Before she’d noticed from her power nap, she’d become slightly hunched towards this lady sitting next to her. But this woman didn’t appreciate it in the least, and according to Kumai-san, she suddenly gave her a quick, nearly violent push. This scared Kumai-san and out of consideration she kept herself awake for the rest of the commute just so she wouldn’t be a bother to her anymore.

But wouldn’t you know it, the next moment it was suddenly this woman napping and becoming hunched towards Kumai-san. Kumai-san — figuring she wanted to be the bigger person here — only gave this lady a very slight push. So in the end they both ended up falling asleep on each other a little. Anyhow, the point of the story is that… well, there isn’t one really, other than Kumai-san finding this lady to be quite scary. And she had a green bag, so you should watch out for her.

Kumai-san says she regrets bringing this topic up as — in usual Kumai-san fashion — it turned out to be pretty pointless. Chii tells her not to worry; it was her fault for asking her to tell the story in the first place. “And besides,” she adds, “the listeners are all allies of Kumai-san.“

Fan mail: This listener attended the first individual handshake event of her life on October 5th. She shaked hands with Chii twice this day, and this let her discover an amazing ability Chii possesses. She asked how old Chii thought she was; this is because the listener says they’re very baby-faced and even at work people will often assume she’s just a high school student working there as a trainee. In other words she doesn’t look her age, but if Chii was able to guess her age correctly, she figured this might lead her to feeling more self-confident. Chii, without barely even thinking, said the listener looked like she was 23, and this was correct. This made the listener really happy, and it made her first handshake event very memorable for her. She thinks Chii has a very discerning eye, and she also found her very easy to talk to. The listener tells Chii that she’s cute and she looks up to her, and that this experience made her like her even more.

Chii remembers this fan and says she didn’t think she really looked that child-like. Chii actually gets this kind of question at handshake events a lot, and she’s found that quite often she does get it right. So she agrees she really might have a knack for guessing people’s ages. In any case, Chii says she’s very happy if this gave the listener some courage or made her feel more confident about herself.