Meimi got her wish last week, and this week, Kananan is getting her wish of two very special guests joining them in the studio for their 100th broadcast.

Kananan: I’m pretty cute, but these two surpass even me in cuteness, and while it is honestly killing me inside, I will greet them with a smile as best I can. 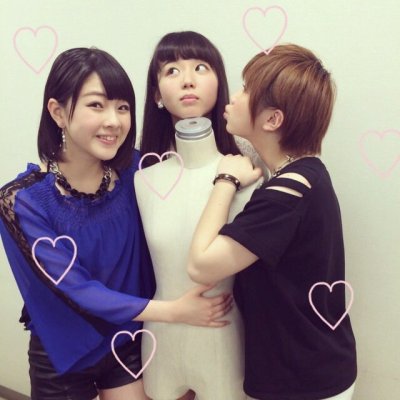 Of course, she’s referring to the other two of the three top beauties in Japan, Takechan and Rinapuu, who introduce themselves in their most adorable voices. Meimi starts to speak in the same adorable voice but then she remembers that she is not one of the three top beauties and goes back to normal. Takechan interrupts with a high-pitched, “Wait a minute!” but Meimi tells her to speak up because she can’t understand her. Takechan just yells louder in the same pitch and we get nowhere.

Meimi: But wait, what’s wrong?
Kananan: What?
Rinapuu: What?
Takechan: What?
Meimi: Wait, I’m not talking to all of you. Takeuchi Akari-chan, why did you say, “wait a minute”?
Takechan: Oh, yeah, well, it’s just a fun show.

Meimi begins to get frustrated as the the three top beauties ramble on about nothing and asks them to speak so that the listeners can actually understand what’s going on, what is wrong with you guys. Takechan sees no problem here. Kananan says that the only thing wrong so far has been her thinking that she was the cutest in the group when in reality it’s Rinapuu, obviously. Meimi says she’s starting to feel like a babysitter, which only makes the other three get louder. Rinapuu points out that before they promised that they’d come on really strong this show and they’re doing just that. Meimi pleads that the promise is less important than showing some unity and cohesiveness with the script, instead of the weird insanity that the show is currently, but the others argue that the charm of 2nd gen is their weird insanity. They urge Meimi to play along and have fun but she is too concerned about the state of the show to let loose. Ugh, this is why you will never be a top beauty, Meimi. 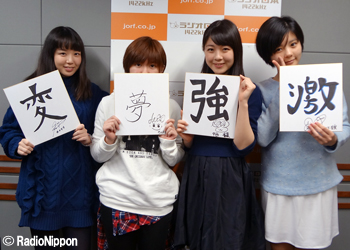 This Year’s Kanji
A special corner, Kotoshi no Kanji, in which the 2nd gen members present a kanji character to represent feeling the past year

First up is Kananan, who gives us the kanji for ‘strong,’ 強. She picked this for the feeling of overcoming anything and not giving up, because S/mileage got to perform in their wrestling teams at Budokan this year and they’ve had some incredibly long tours and in general they’ve all had to toughen up a lot mentally this year. She thinks the bonds between 2nd gen have also gotten a lot stronger as a result of all that they’ve undergone this year, like the addition of 3rd gen and the name change announcement and Budokan. She has also gotten a lot stronger as a person, because now she can go to the store by herself and not get nervous like before. Rinapuu and Takechan interrupt to remark upon how adorable she is throughout this explanation.

Takechan chose the kanji for ‘dream,’ 夢. Kananan sings Choto Mate Kudasai in the background as Takechan explains her decision. This year gave way for multiple dreams to come true for Takechan, like performing at Budokan and being able to go to all 47 prefectures in Japan, although they’re still in the process of the latter.

Rinapuu picked ‘change,’ 変. “That’s weird,” says everyone, because this kanji also carries a meaning of ‘strange’ or ‘weird.’ She intends it be read as ‘change,’ though, because obviously a lot has changed for them this year. Budokan was a major turning point for her, since they had been only doing live houses for a while and it completely changed her point of view, and then of course the new members and the name change came along.

Meimi’s kanji is ‘incite’ or ‘extreme,’ 激. It’s also half of the kanji needed for the word ‘stimulating,’ and so her reasons for picking it are very similar to Kananan’s and Rinapuu’s. They had so much to do this year and they went to the ends of Japan, Hokkaido and Okinawa, so it was a very stimulating and exciting year. Meimi will remember the best days she has had this year and they will be enough to get her through any tough times she has to face ahead of her. The best part of this corner was hearing the presenting member getting irritated at everyone interrupting her and then proceeding to interrupt the next presenter. As expected of the three top beauties.

But really, Takechan cried the most she has ever cried in her entire life. Her eyelashes were falling out, even. Rinapuu says she also cried a lot, but not that much. Kananan informs us that all of them decided to watch the show in twin-tails in honor of Sayumi, but most of them got embarrassed halfway through and took their hair down. Speaking of hair, Meimi is most impressed with the fact that Sayumi managed to have a 12-year career and never dyed her hair once. Most all of them have gone through some sort of image change since becoming an idols, and that’s natural, because most people want to change things up every so often. Kananan tries to redeem herself from her earlier, less than impressive comment and says that she really admires how Sayumi managed to make such a long career just on the fact that she loved her group, and although Kananan has only been in S/mileage for a few years, she wants to become a similar figure in S/mileage as Sayumi was in Morning Musume. Meimi also remarks on the fact that it was clear during the show that something happened to Sayumi’s leg, but she kept smiling through the whole show and that was amazing.

Relieve the joy, the pain, and Maro’s broken hair

Oh, wait, weren’t they also the opening act? Maybe they should talk about that a little. “I’m sorry, Sayumi was too incredible so I have forgotten all about that,” announces Meimi. Well, as a reminder, S/mileage performed Eighteen Emotion as the opening act at Yokohama Arena as 9 members for the first time. Rinapuu explains that they had been planning on performing just as 6 members, but then the staff informed them that they were going to change it to be the 9 member debut since it was such a big stage… and they didn’t really have any time left to rehearse. They were kind of stretched for time to practice but they understood the importance of having a debut on such a big stage and didn’t mind it. Kananan tries to remember where they had their debut. Takechan believes it was on Nankai Candies’ TV show when they first performed Tachiagirl, but no one else can really remember. In any case, it wasn’t Yokohama Arena.

By the way, they’re going to be giving away the signed kanji that they wrote through the radio station; if you want to try your hand at winning one, you can send an email or a letter to the radio station until Christmas. That’d be a nice gift. Anyway, that’s all for the top 3 beauties and Meimi special! 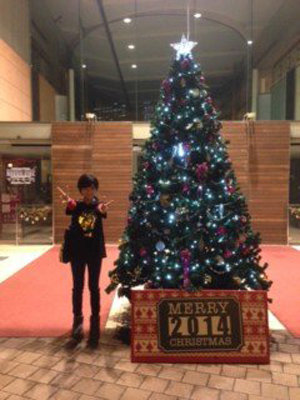