Momoko announces that December 6th is ‘Oto no Hi‘, which roughly translates to ‘Sound Day’. She asks the others: do they have any sounds that they like? Or dislike, like a blackboard being scratched, which turns out to be something that the girls unanimously dislike. Momoko herself loves the sound of running streams.

Airi hails from Chiba, and she enjoys the chirping of crickets on summer nights. She loves how beautiful the evening sky gets during summer and autumn, and when she goes outside, she hears the crickets chirping. Fellow Chiba resident Momoko understands, while Saitama representative Miyabi isn’t familiar with it at all.

Miyabi professes to liking the background music that’s playing while they speak.

Even though the current background music is just an instrumental, it creates a cafe mood. When Miyabi hears a song sung by a foreign artiste she doesn’t know, she just enjoys listening to the singer’s voice, though she doesn’t actually go through the effort of looking up the singer. Basically, she likes music she’s unfamiliar with. At cafes, music like that helps her relax. Recently she’s been turning on such background music-type songs when she goes to sleep, which she finds calms her down. Momoko and Airi find this action pretty stylish.

Momoko: In Miya’s case, her bedroom is a cafe. 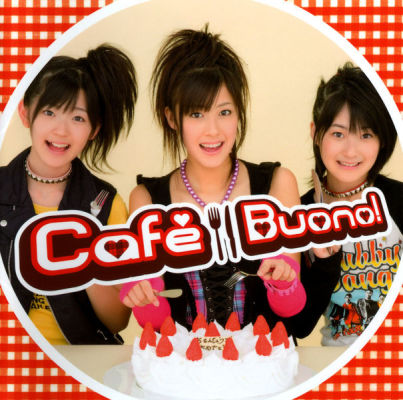 The girls don’t really have to perform jokes at year-end parties, but Miyabi thinks that it must be tough for entertainers, as they’ll have to contend with their senpai.

Momoko notes that if you preface your story with ‘Something funny happened recently‘, the story generally turns out not to be funny. Airi admits that she’s guilty of that – she sets the hurdle too high before she even starts.

Momoko herself has recently discovered an interesting child’s toy – a lie detector. She thinks it’s something that’ll liven up year-end parties. Airi goes one step further, and remarks that there’s even an iPhone app that can do that. Of course, there were times when the app gave false positives to weird questions – like when ℃-ute leader Yajima declared that she was a guy, the app agreed.

They then start wondering about how it works – does it detect the pulse? Or perhaps through sweat? Airi recommends everyone try it, it’s free anyway.

Momoko sums up by noting that it may be tough to pull off an act for year-end parties, so perhaps employing a device might liven things up.

Today’s secret voice note comes from a 28 year old guy, who works as a game creator at a gaming-related company. He’s recently had opportunities to meet with friends from his senior high days through relaxed reunions at the izakaya pubs in their home town.  10 years have passed since they graduated, and they’ve all grown up. However, at those reunions, what gets the most attention is his looks. At school, he was active in the baseball team. But when he entered university, he got into anime and games, and now he’s turned into a complete otaku. Otakus are considered cool overseas, but he’s getting a poor response from his female former classmates. ‘What should I do in order to become a popular otaku?‘

Momoko notes that today’s request is straight to the point. Someone’s giggling, which prompts Momoko to ask why. Miyabi finds it a bit weird, while Airi finds it fresh. Also, what’s with the statement about anime being cool overseas? Momoko agrees that Japanese anime is huge overseas and is something that’s considered cool.

Since the listener mentioned that he played baseball at high school, Airi wonders if he makes baseball games. Touch is what comes to to Momoko’s mind when she tries to think about baseball-related anime or games.

Momoko wants to know who exactly he’d like to become popular with. Is it popularity in general? Or just to catch the interest of someone he likes?

Having chosen that occupation, Airi thinks that he should be prepared for that kind of response. Momoko actually thinks that being a game creator is pretty cool. Airi suggests that perhaps his appearance really changed. For example, from muscular and macho, he became fat. Or his crew cut turned into long hair.

Momoko: He was part of the baseball club, right? Wouldn’t it be okay if he shaved his head?

Well, the others think that first he should aim to return to how he looked like during high school. He should do lots of muscle training. While making games.

Momoko thinks that it doesn’t just come down to looks, that the listener should make an effort to find what games and anime are popular with the ladies. Then he’d be able to liven up the conversation and make them start thinking that he’s interesting. She doesn’t know if that’ll make him popular, but at least he’d be interesting and get a better response. They hope that he’ll do his best with that course of action and wish him good luck.