The show today opens with Rinapuu asking Meimi what marks the start of winter for her, as it’s starting to get chilly during the morning and evening. Meimi begins to describe the cool winter breeze blowing into her room and sparkling in the morning in a very dream-like voice, which freaks Rinapuu out: “Please go back to normal,” she asks, before Meimi starts singing out of nowhere. “Please be quiet, the listeners–“ Rinapuu tries to stop her but it’s too late, Meimi is in her own world now.

It turns out that it’s the final day of Wicked in Japan and Meimi is doing her best Glinda impression as a result. Rinapuu doesn’t know who that is, but she does know that Elphaba is the name of one of the characters although she’s not sure which one (“The green one?”).

Rinapuu knows that it’s winter when she starts to get affected more by static electricity. She hates static electricity more than anything, possibly even more than bugs. Meimi remembers back when they shot the Mystery Night PV and it was freezing cold in those outfits so they all wore big coats… except Rinapuu. Rinapuu says it’s because taking the coat on and off would give her the static electricity prickles and she doesn’t want to staff members to keep getting shocked from putting it on and off of her either. Plus, her hair gets messed up from it and she doesn’t want to have to keep asking the hair dresser to fix it for her. Static electricity is her least favorite thing, but it’s how she knows winter is around the corner.

Rinapuu tries to change the subject to food that they’ve enjoyed recently, but they’ve enjoyed all the food they’ve gotten to eat on the tour so it is a very short-lived discussion. Meimi switches gears to talk about Takechan’s upcoming birthday and if they could do anything for her on the radio show. Rinapuu thinks a surprise party might be too difficult to pull off, so Meimi comes up with an even more elaborate plan: they’ll all gather for the radio show and they’ll play a game, a game that Takechan definitely can’t win, and then have a punishment game to follow where the loser has to put on some sort of outfit, preferably one Takechan would hate. Then they’d all sing happy birthday. They both realize that the staff and Takechan both wouldn’t like this too much, so they’ll probably just do some birthday crackers or something. 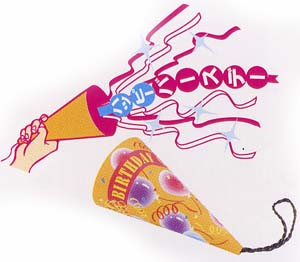 All you need for a good Takechan birthday

So even though Rinapuu admits to more or less giving up on this corner since so many of the Bakuwara Friends are graduating soon, she’s sticking with the same name for now. Since Michishige Sayumi is graduating shortly at Yokohama Arena (at which S/mileage is also performing as an opening act), she wants to take the opportunity to talk Sayumi before she graduates. Meimi recalls a time at a past Hello!Con when Sayumi needed some hair wax but couldn’t find the stylist to give her some, so Meimi let her use some of hers. Much to her surprise, not only did Sayumi return to her with a brand new pack of hair wax for letting her use it before, but she also gave her some candy with it, too.

Rinapuu says that it isn’t just that she looks up to Sayumi as a performer, but also as someone in general to respect. They both agree that Sayumi has never shown any hesitation in speaking to them whenever she sees them or trying to become better friends with them, showing an impartiality among her coworkers that they find very rare. Meimi says that most of the time she feels very nervous or afraid to speak around her senpai, but Sayumi has this air of being incredibly easy to talk to even for people much lower in the company or much less acquainted with her. She’s very popular among the kenshuusei, Rinapuu reports.

Sayumi’s leadership and amicable personality are even more of an inspiration as the 3rd gen of S/mileage joins. They both find it remarkable how easily she seemed to situate herself amongst the 9th and 10th gen members, even with very childish members like Maachan, despite being so much older and more experienced than them. Seeing her with all the Morning Musume members makes them realize how now that S/mileage has the same ever-changing system in place, they’ll have to learn to adapt to changes and new members much more so, as well as being able to leave something of a legacy behind when they leave. While they look up to Sayumi so much as an individual, they recognize that she has dedicated so much of her life to other people that they definitely want her to take the time off to relax and enjoy herself. 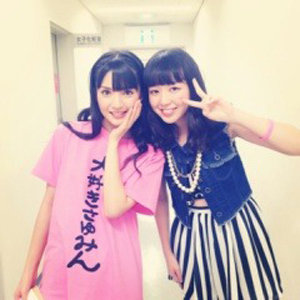 Good-bye, Sayumi. You were a great Bakuwara Friend.

After an unsuccessful attempt to get Rinapuu’s attention with an Elphaba impression from Meimi, we hear from someone with the radio name Only Sensitive to the Cold. They were at a recent event where the members were talking about their headphones and Takechan said that she had the same pair of headphones that someone in the audience had, and later on Takechan posted a blog about it. They want to know if there is anything that the members have blatantly taken any ideas for clothing or poses or anything from the other members.

At first, Rinapuu and Meimi say that they don’t take anything from each other, actually… well, maybe Meimi has copied several of Maro’s outfits and gone out to buy things at the same stores that Takechan and Rinapuu shop at, but other than that, no, she doesn’t take anything. In Rinapuu’s case, it’s more of the fans taking ideas from her, instead. She’ll blog about some earrings or something that she likes and later she’ll see fans wearing the same ones or see them trying to dress like her. She doesn’t really mind that so much, she finds it flattering, if anything.

Apparently Meimi has had the rather unique experience of having men come up to her at handshake events with items that she has showcased on her blog before, like very girly, shiny, pretty things like headbands or necklaces or something, and she isn’t entirely sure how to react. She tries to explain herself in the most diplomatic way possible here; she definitely does not want to offend anyone, but while she’s happy that she has that level of influence on people and it’s okay for men to bring and wear those things to a S/mileage event, she isn’t really sure it’s okay to keep wearing them like on the train back home.

Meimi says that once she wrote a blog about an anime she was watching and the female character in it that she liked, and then later at a handshake event, a man came dressed up entirely like that character, down to the very last detail. They were even kind of acting like the character and it was incredibly surreal. “That’s terrifying,” is Rinapuu’s reaction. The conclusion they come to is that it is okay for anyone to take inspiration from them, particularly their dancing or certain aspects of their outfits, but there’s a line. 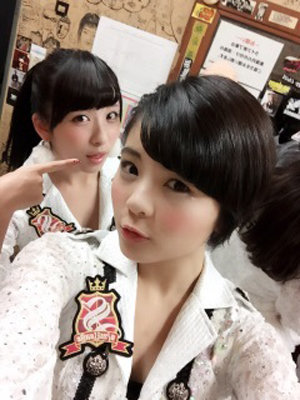 Dressing up like Meimi might be a no-no for dudes, but what about copying her new hairstyle?