While last week Chii said that autumn is the season of good appetite, she now claims that it is also the season of sports. Thus, she asks Kumai-san if she has been exercising as of late, and Kumai-san answers that she hasn’t been doing any whatsoever. Besides dancing the closest she’s gotten to exercise has been walking up escalators, and she’s now noticed a major decline in her physical strength due to her lack of trying. This, however, has prompted her to become interested in starting up yoga. She talks about her friend having started it and how it’s supposed to have all kinds of health benefits, but then admits she hasn’t actually tried it herself as of yet.

Meanwhile, even though Chii finally bought a pair of running shoes back in September and promised she’d begin her new hobby soon, she reveals that she still hasn’t gone running — only walking. What’s more is that Chii used those shoes on only a total of two walks, and since then they’ve been sitting in their box. Again. Kumai-san is in disbelief hearing this. Chii adds even further insult to injury and reveals that one of those walks she did take wasn’t really a walk for the sake of exercise: she just went shopping in Harajuku and Shibuya while wearing them.

Moving on to the topic of some recent events, Chii says that a miracle took place on the day prior to their most recent bus tour in September: Berryz Koubou got to visit Disneyland together, and this was actually the first time ever that all of the members gotten together to hang out in private. The two go on to praise Disneyland and talking about how much fun they had (a lot).

Right after Disneyland they all got on a bus headed to their bus tour in Gunma. That’s where another miracle occurred: the members all ended up spending the two nights there in the same room, which was another first for them in their whole 10 years of being a group. Interestingly, they already had signs in place saying where each member was supposed to sleep, and for some reason Kumai-san and Risako were the only two to have beds.

The most difficult part about this experience for them was how each member would wake up at different times. The worst thing to deal with was Maasa’s alarm going off, which happened to be some song which Maasa let play for a full for five minutes or so — on full volume, of course — before bothering to turn it off. This nearly drove Chii crazy. 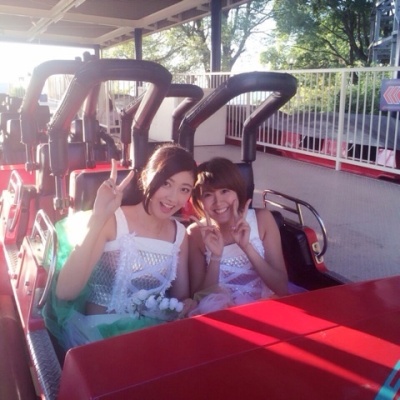 Topic #1: Chii says they have a letter from a listener for this corner: they want to know how the members of Berryz loosen up and deal with nervousness before getting up on stage at concerts, stage plays and the like.

The one thing all the members do before concerts is form a circle and do the “Berryz Koubou iku be!” call together, followed by high-fives. “That already calms everyone down a little,” Kumai-san says. Something Chii does with Captain when they’re nervous is smack each other on the back — hard. Chii says this gets both of them fired-up.

Kumai-san: Doesn’t that hurt, though?
Chii: It does.

When Chii and Captain couldn’t do this before their Sengoku Jieitai performances back in May, they instead just gripped each others’ hands really hard. Chii explains that when they exert that bit of force, it makes their bodies tighten up and get ready for the stage. Kumai-san, too, remembers shaking hands with Risako often during Warera Jeanne. The two agree that shaking hands is something that just feels very reassuring; Chii says this is why she feels really reassured at individual handshake events. “True story,” she says.

Topic #2: Chii introduces another letter. This listener wishes to know something concerning their live performances of “Futsuu, Idol 10nen Yatterannai Desho!?” He recently saw Chii “lip-syncing” to the horse sound in the background of the song at a recent live event — similar to how she does in the music video’s making-of. Chii didn’t do so, however, when he saw them on other occasions at the summer Hello!Con and at the Berikyuu Budokan concerts. The listener thus asks if Chii has any sort of criteria as to when she does mimic the horse sound and when she doesn’t.

Fan mail: The listener says they have no sense of direction and they’ll frequently get lost even while consulting a map application on their phone. The listener asks how the two as well as the rest of the group are with directions.

Like the listener, Kumai-san says she’s hopeless with directions even with the aid of apps. She adds, though, that Disney Sea is the one place she’s confident she wouldn’t get lost at. When asked if the same applies for Disneyland as well, she’s quick to answer that it doesn’t. On the other hand, Chii is really good with directions, both with and without the help of Google Maps. “You just walk towards the blue thing,” she explains.