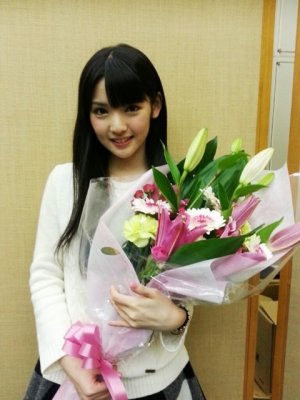 After Sayu’s opening “Konya mo Usachan Peace” call together with the audience, it’s time for letters.

Sayu says that Maa-chan might actually be alright in the end. She reminds us that at first Maa-chan was very attached to Reina, but after her graduation, she moved on to Sayu. So in Sayu’s mind she was Maa-chan’s no. 2, and if we are to go by this logic, she’ll surely move on to no. 3 after Sayu is gone. As to who that might be, Sayu hopes one of the other 10th gen members would take on that role — although she does feel bad for her successor.

As for the second most worrisome member, Sayu thinks it might be Oda-chan. She explains that once she’s gone, Oda will be the only member left with no generation mates in the group. Sayu guesses that Oda might’ve been actually hoping for the 12th gen to consist of only one or two members so she could’ve gotten along with them well from the start, but now with 9th, 10th and 12th gen all having four members, she might feel like she doesn’t fit in. On the other hand, Sayu says that even when Oda had just joined the group at a time it had Sayu, Reina and the 9th & 10th gen members, she always kept her cool. So even though Sayu feels just a bit worried, she’s sure Oda will be just fine. 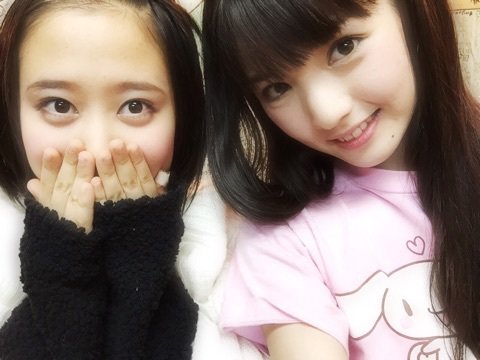 Fan mail #2: It’ll be Sayu’s big sister’s birthday soon (11/7), so the listener asks if Sayu has thought about how they’re going to celebrate yet.

Just the other day Sayu asked her sister what she’d like for her birthday present, and she replied that she didn’t need anything. When asked why, she surprised Sayu with a surprisingly mature response: “because you’re already doing all kinds of nice things for me even when it isn’t my birthday.” Still, Sayu’s probably going to get her something, she just doesn’t know what yet.

Sayu recounts an unrelated Aneshige episode. The other day Sayu and her sister were just having a chat while eating, and they were talking about the little incidents that happen to us all in daily life, like trying to open a plastic bottle when it’s already open, or accidentally throwing away the candy and trying to eat its wrapper, etc. Suddenly her sister gave another rather peculiar example of this.

Aneshige: Yeah, totally! And another thing that happens a lot is throwing away the egg and putting the shells in the bowl instead, right?!
Sayu: … No. No, that has literally never happened to me once in my life.
Aneshige: Huh?! Really? That happens to me all the time!

Aneshige was quite convinced about this being something totally common, so Sayu asks if there are any fans in audience who this kind of thing has happened to.

This is Suzuki’s second time on Konya mo Usachan Peace: her first time was just a month or so after she’d become a member and she remembers everything about it, including the clothes she was wearing, and she says she’s so nervous right now that her hands are shaking. Sayu saw Suzuki and Maa-chan talking the day before; Suzuki said how much she was looking forward to today and Maa-chan was jealous at her for getting to be on the show again. This made Sayu happy.

Since they’re recording the show in Aichi, Suzuki’s home prefecture, Sayu asks her about her favorite things about Aichi. Suzuki likes how much nature there is all around, and how she can quickly get to both the sea and the mountains (you might remember that she does mountain climbing with her dad.) She also talks about her love of Sugakiya Ramen, a Nagoya specialty. 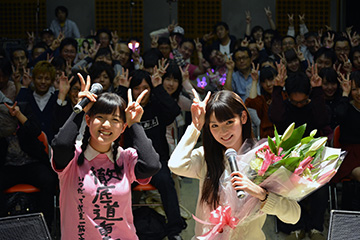 Scenario: “Losing 10kg (22lbs) after a year of working hard at dieting, then making the news with the headline “a beautiful Nakama Yukie-lookalike in Morning Musume?!” and becoming the center of the group — Suzuki Kanon!”
Rating: ★★★★★

The audience laughs and applauds. Sayu suggests they give this the full rating, and Suzuki agrees, saying that this way she’ll have no choice but to do as the scenario suggests. Thus, it’s given the full five stars.

Suzuki says she does really hope to lose 10kg. Sayu mentions how she told Suzuki the other day on Downtown DX that she’d be super affectionate towards Suzuki if she lost the 10kg, so Suzuki intends to do so just so she can cash in on Sayu’s promise. Plus, she does want to become the center. Sayu says Suzuki does have a really, really cute face. “Right, guys?” The audience applauds in agreement while Suzuki laughs and says she’s embarrassed. Sayu continues to say that while Suzuki’s already very cute, she suspects that she’d really start being in the news a lot if she lost the weight.

Sayu goes on to say that if “that” Suzuki suddenly lost weight and became even more beautiful, she would become a seriously hot topic on the news. She repeats that Suzuki is already very cute, and especially her big, wide eyes would become even bigger and wider if she lost some weight.

Sayu says she speaks from experience: she, too, was a bit chubby in her teens, and she’d find that extra weight in all kinds of unexpected places. One thing that surprised her after losing that weight was how even the size of her feet got smaller, and Suzuki mentions her feet getting bigger, too:

Suzuki: I got into Morning Musume, got fat–
(audience laughs)
Sayu: … Are you okay with using that word like it’s nothing? (laughs)
Suzuki: Sure! Anyway, then my feet had gotten one centimeter bigger.

Sayu says, though, that in Suzuki’s case that’s more likely just due to her going through a growth period. Still, Suzuki says she’s having trouble finding shoes that fit her as of late, so she’ll slim down also for the sake of her feet. She promises to lose enough weight in order for Sayu to see her dancing in the center position when the group is doing TV appearances in the future. The audience applauds. 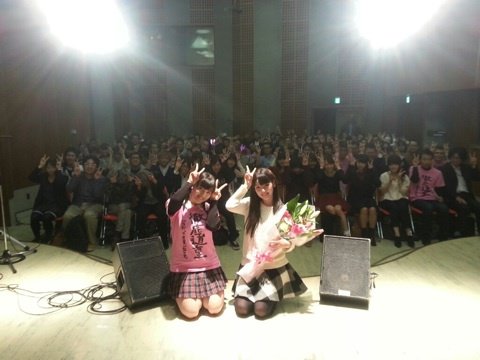 Sayu nervously asks if their live rendition of the song was good enough to be aired. After a brief period of waiting and suspenseful music, they get an “OK.” The two cheer happily and the audience applauds them once more.

The public broadcast segment of the show ends and the two return backstage. Sayu repeats here the announcement they already made in front of the live audience earlier: Konya mo Usachan Peace will end on November 24th, and the person to continue in her time slot starting in December will be none other than Suzuki Kanon!

Suzuki says she appreciates all the hard work her seniors have done on the time slot before her, and that she will do her best to create her own show that she hopes to be great and very Suzuki-like.

Three more episodes to go — the last of which will be a one-hour special. 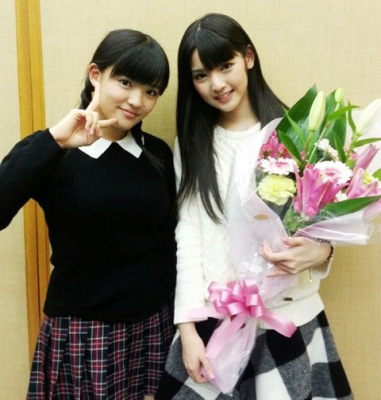