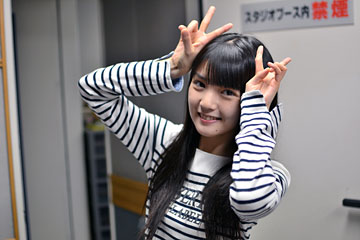 Fan mail #1: Although the listener did hear about Sayu’s upcoming break from the entertainment world, they have something they’d definitely like to see happen: Sayu producing her own H!P group all by herself. He suggests that a group produced by Sayu would be very interesting, and that he’d love to hear songs that were written and composed by her.

Sayu says that while the idea of producing a group sounds fun in theory, there is no way she could ever compose a song for anyone as she has no idea how. She mentions that Maa-chan loves arranging the vocal melodies of their songs. For example:

becomes and that kind of thing.

Maa-chan can do that for lots of different songs. She’s always singing the songs with her original arrangements which will sometimes throw Sayu off and make her wonder which version of them was the correct one. While that is obviously an inconvenience, she thinks Maa-chan is amazing for being able to do that like it’s nothing. Sayu says she doesn’t possess anything like Maa-chan’s ability — she can only sing songs written by Tsunku after first listening to his demo vocal over and over again until it sticks.

In short, Sayu says that while she might be able to write some lyrics, she doesn’t know “even one millimeter” about composing.

Still, the other aspects of producing do seem fun to her: choosing the hair styles, outfits, even the exact lengths of the skirts, how much skin they expose, all kinds of little things like that. So if she ever does produce a group — not that there are any plans of the sort — she’ll just take care of that kind of thing while leaving the songwriting to others.

Fan mail #2: Sayu is set to graduate Morning Musume on November 26th. “And speaking of graduations…“, the listener asks if it would be possible for Sayu to hand out the second button of her outfit at her graduation concert to some lucky audience member by way of lottery. 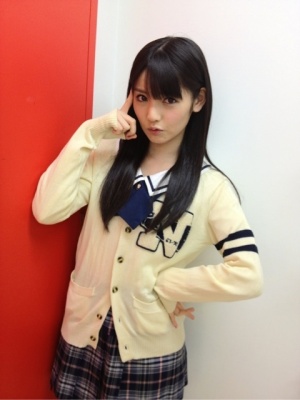 Fan mail #3: Having just heard “Shabadabadoo” for the first time at a recent concert and finding it very cute and fitting for Sayu, the listener asks if there’s anything she tries to concentrate on or be mindful of when singing it.

Sayu did lots of quiet, whispered vocals on the recorded version, so she tries her best not to sing it too loudly live either which can be surprisingly difficult because of the adrenaline from performing in front of an audience. While her vocals aren’t quite as whispered when she performs it live, she nevertheless tries to sing it very softly.

Sayu has noticed other members such as Ishida singing the song to themselves off-stage, too. This makes her really happy, and she recommends that fans try singing the song in karaoke as well.

Question #1: “If you could release some goods in collaboration with an anime character, which character would you choose?”

Out of these two options, Sayu chooses the latter because she remembers Sanma telling her how happy he was to get to do a collaboration with Sazae-san. This left a big impression on Sayu. But if she could choose any anime character, she’d go for Chibi Maruko-chan.

Question #2: “You receive an email from a member that was clearly not meant for you. What do you do?”

Sayu chooses the former option, but adds that what she actually does is wait about five minutes before letting them know — the sender might realize their mistake right after sending the email.

Sayu says she often accidentally sends emails meant for her mom to her manager and vice versa, like mistakenly sending “wake me up tomorrow at something-something o’clock” to her manager, or “I updated my blog, please check” to her mom.

Question #3: “Which of these two fluctuations would be worse?”

Without any hesitation, Sayu chooses number two, laughing. She explains that while she could actively do something to lose weight again, there’s no immediate action she could take to raise her salary again. So this one’s an easy decision for her.

Question #4: “As a sequel to “Michishige Camera” and “Sayu”, which of these books would you like to release next?

Sayu chooses the manga, even though she’s not sure her life story is exciting enough to make a manga. While she did enjoy writing before, she’s now quit entirely and she doesn’t even keep a diary anymore, so she figures the poems might be even more lacking.

Sayu thinks she must’ve quit keeping a diary around the time she started her blog, which effectively replaced it in her mind. Plus, if she wanted to read some old diaries she’d have to go through the trouble of finding the right one, whereas she can always easily access her blog just using her phone. 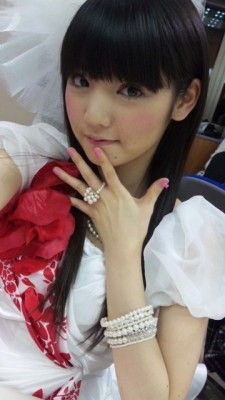 First ever picture Sayu posted on her blog (Feb 2010)

Question #5: “Which of these is more comfortable for you?”

Sayu immediately chooses number one, but she explains that this is not because she’s the most senior member in the group, but because all her current juniors are such good girls. So it’s all thanks to them, and Sayu says she feels really grateful to them for making the group such a pleasure to be a part of.

Sayu wonders what her seniors like Iida-san thought about her when she’d just joined the group — she figures it couldn’t have been easy considering how disobedient and unwilling to practice she was.

Question #6: “Which of these things is more likely to happen at your graduation in Yokohama Arena?”

Sayu doesn’t think either of these is going to happen, but answers number two. Sayu adds, though, that Maa-chan is really good at summarizing her thoughts when giving those parting words to graduating members, and she manages to do it in a way that’s very “Maa-chan.“