Sayu begins by talking about her recent activities with Morning Musume and how they’re starting to remind her of her approaching graduation: she’ll now often realize she’s doing all kinds of work with them for the last time, the recently ended Hello!Con or Naruchika tour as an example. She didn’t feel very aware of it at the time her graduation was announced, but now it’s starting to hit her with all these “lasts.” While it does make her feel lonely, she also doesn’t want to end up having any regrets so she’ll continue having fun talking with the members everyday, and trying to leave the fans with lots of great memories.

And speaking of lasts, Sayu brings up Morning Musume’s 57th single which is the last one featuring her and says tonight’s broadcast of Konya mo Usachan Peace features the first-ever broadcast of “Shabadabadoo.” Her initial reaction to the song title was one of confusion — “Shabadabadoo? What, does it have something to do with Kudo?” But now she actually likes the title and how its similar to the pointlessness of the title of her previous solo song, “Lalala no Pipipi.” She thinks that one, too, doesn’t really have any real meaning, and yet it very accurately represents the image of “Sayumi.”

Commenting on the difficulties Sayu had recording the song, she says her first recording session for it took five hours (usually a single only takes her just an hour or so.) She recorded all the vocals in the song herself, including the whispered and background vocals. Afterwards she received some pointers from Tsunku, so she did another recording session for the song improving some of the parts which took her a further three or four hours. So all in all, she spent eight or nine hours in total recording her vocals for just this one song.

Since she gave it her everything, she hopes the listeners will reciprocate by listening to the song so much that their ears begin hurt — though Sayu adds that since it’s her singing, that might actually only require one listen.

Fan mail #1: The listener talks about how Sayu seems to have gotten really hooked on açaí na tigela when she was in Hawaii as she’s even had some since returning to Japan. The listener also knows Sayu has a Yonanas maker at home, and suggests that she could try asking her mom to make some açaí na tigela for her at home.

The first time Sayu had some açaí na tigela was actually when she went to Hawaii to shoot her episode of “Another Sky.” She’d seen pictures of it on famous people’s blogs, including Ai-chan, who were all saying it’s delicious. When she went to there again for the fan club tour, Ai-chan’s stylist who happened to know the exact place where Ai-chan had had it showed Sayu the location. Sayu says it was really, really delicious — “even if I don’t know what açaí is to be honest.“

Sayu’s actually thought about whether she could make it at home, too, so she looked up some recipes and found that it looks quite doable even with just a juicer. Her only problem is that she doesn’t know where she could buy some açaí, but says she’ll look into it on her next net patrolling session. 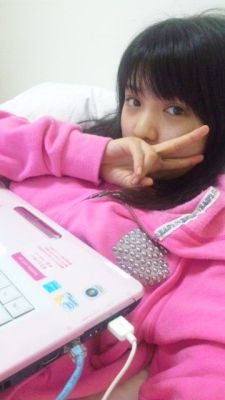 Fan mail #2: The listener is a 27-year-old female. She says that since girls always tend to hang around the same group of girls, she wants to know which H!P members Sayu most often spends time with at rehearsals and breaks.

Sayu says that in the past it was always her and Kamei Eri, and that in all honesty there’s no one she spends time with quite to that extent right now. With Eri they’d always be together even in the dressing room — if Sayu and Eri ended up in different dressing rooms at times, they’d both get really restless and come up with plans that would somehow allow them to be together.

Nowadays, she’ll sometimes talk with members and sometimes just be alone. At H!P concerts, the member she most often talks with is Momochi. At the previous Hello!Con, Sayu along with Momochi and Airi (the pink trio) sang Momoiro Kataomoi together, and every time they did it’d be like a solo song for one of them as the person singing the main vocal changed with each performance. But whenever it was Sayu’s turn, she’d get really, really nervous, and Sayu says she does not handle that kind of pressure well. But Momochi — even though she normally always says she’s cuter than Sayu — would call Sayu the cutest of them all just before they were about to perform the song. She says Momochi and her smile when she’d say that would always help her do her best despite her nervousness.

Another thing Sayu finds great about Momochi is her honesty in how she’ll let Sayu know about every little change she notices about her. For example, the things Sayu heard the most from Momochi on this past Hello!Con tour were things like “Michishige-san, you look really worn out today” or “Michishige-san, your face is swollen today.” When Sayu got back from Hawaii, Momochi immediately said “Michishige-san, did you get a tan?” Whereas other H!P members would just call Sayu as white as ever and say she doesn’t look tanned at all — and Sayu doesn’t doubt that they really did think so — Momochi in turn would notice and let her know even if just her arms looked a little bit more tanned than before. Sayu really enjoys these honest conversations with Momochi.

Fan mail #3: The listener mentions how Sayu has released two T-shirts this past year: her birthday T-shirt with 25 hearts on it, and the “Michishige Addiction” T-shirt. He asks which of them he should wear when attending concerts, and which of them would make Sayu happier.

Sayu says that while she’s of course happy about everyone who bought her birthday T-shirt, she says she prefers the “Michishige Addiction” T-shirts for concerts — they’re simply easier for her to spot when she looks over the audience and searches for her fans. 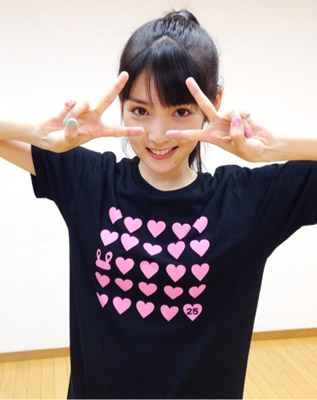 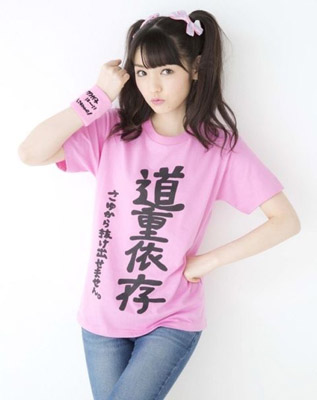 Suggestion #1: “What’s that? You can’t sleep? Well, why not try counting all the cute things about me!? Always worried about you oversleeping after having too many dreams about me, I’m Michishige Sayumi!”

Sayu really likes this one, and suggests that falling asleep while counting the cute things about her would definitely result in good dreams. Or, she adds, it could result in you not being able to fall asleep at all due to you realizing how Sayu-addicted you are. Still, Sayu asks that listeners try this method tonight.

Suggestion #2: “Back then I used to always be in the back row, but today I lead Morning Musume ’14 as its PR representative! I’m Michishige Sayumi, the past — and present — member in the back row!”

Sayu: Now that you mention it, this is true actually…

Suggestion #3: “In the Michishige household, melons tasting like felt-tip pens is the norm?! Riper than a melon, I’m Michishige Sayumi!”

Sayu reports that melons continue to taste like felt-tip pens to her mom and big sister. She mentions that her big sister enjoys it when Sayu writes about her on her blog and that Aneshige also reads all the comments fans leave on those posts.

Suggestion #4: “Morning Musume is my youth! I gave the group everything I had and I regret nothing! I’m Michishige Sayumi, the girl who fell in love with Morning Musume!”

Sayu says she likes this one and — like she said at the start of the show — she wants to keep doing her best until her graduation so that even at the end she can say she truly has no regrets.

Sayu says she does want to keep causing miracles.

Suggestion #6: “Everyone who thinks Sayumi is the cutest girl in the world, please raise your hands! Oh… And those of you who didn’t just raise your hand, I’m going to need to see you backstage after the show. I’m Michishige Sayumi!”

Sayu loves the idea of the people who don’t think she’s cute, nervously heading over to get scolded by her backstage.

Suggestion #7: “If an idol ever stops being cute, that’s the end for her! I’m going to graduate at my cutest and thus become an eternal angel! I’m Michishige Sayumi!”

Sayu is happy if fans really think this way about her.

Sayu compliments this one, too, and is amazed at the high quality of the suggestions this time. 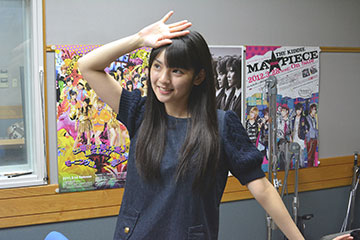