Momoko announces that the day after the broadcast, October 19th, would be TOEIC Day. Again, this is to do with some wordplay associated with the date. The 19th day of the 10th month can be set out as 10-1-9, or ‘To-I-Ku‘, which sounds close enough to TOEIC (Airi: ‘They really do like to use this sort of wordplay‘).

Momoko asks the girls if they’ve used English recently. While Miyabi and Airi haven’t, Momoko has a story that happened on the day of the recording itself – she was on the train when a foreigner asked her to help out with directions. She was having trouble explaining the route, even with a map. In the end, she used an app she had on her phone to help her explain.

Momoko: TOEIC is important, but apps are important too.
Airi: They are important. Although it would have been good to speak English too.

Miyabi’s happy that Momoko was able to help the foreigner out. Yes, Momoko is proud to have been his saviour. While for the foreigner, it’d be a memory of Japan.

Momoko: And so, we too, would like to study foreign languages from now on too.

This interaction between Baron and the girls is unprecedented.

Quick introduction to Baron: Baron Yamazaki introduces himself as the owner-chef of Trattoria Buono!’s cafe setting. For the purposes of this radio programme, he’s in charge of introducing the discussion topic for the day, reading out the secret voice note messages (and hamming up those readings), as well as delivering the opening and closing lines of the show. He’s been around ever since I started listening to Trattoria Buono!, but I’ve been ignoring his role in these summaries since he’s never actually interacted directly with the girls.
Until now.

Baron introduces the topic for the day: Moments that make you happy, without having to spend a dime. He himself enjoys sleeping, even more than making food, and sleeps for over 12 hours in a day.

The girls are amazed that Baron can sleep for over 12 hours in a day. Momoko ribs at his mention of enjoying sleeping even more than making sandwiches. Baron admits that it might be a bit of an exaggeration, but he does enjoy sleeping, the daily ‘switch off’ time, where he doesn’t have to do anything.

Baron then asks if the three of them enjoy sleeping. Miyabi and Airi love sleeping. Momoko mentions that she took a nap the other day, which felt good.  Airi brings up how they had specific napping times during nursery school and kindergarten. While the girls agree that it was awesome, Momoko recalls that she hated it when she was in nursery. She remembers feeling that it was forced on her, having to bring out the futon and being put to sleep, and not sleeping in retaliation (Miyabi:’What’s up with that? You really were a troublemaker.’). But she really enjoyed naptime when she got into kindergarten. And now, Momoko loves sleeping.

Airi: It’s nice, having time just for sleeping.
Miyabi: I think it would be better if we had sleeping time at primary, junior high, and senior high.
(Laughter from Baron)

Momoko asks if the girls fall asleep in the middle of classes. Miyabi says that she feels free to sleep in class, which shocks Momoko. Perhaps it might just have been Miyabi’s school. 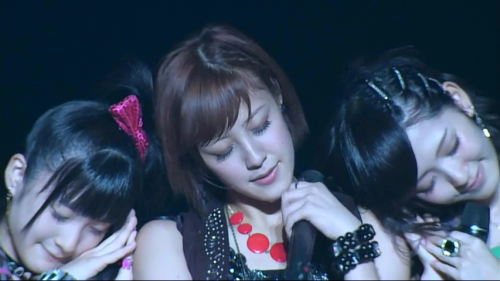 Momoko feels like there are a lot of things they can do for fun without spending money. Airi brings up another – searching for four-leaf clovers. If you find one, you’ll be happy. At one point in time, it was a trend to go looking for four-leafed clovers. Airi mentions that she heard about people splitting the leaves of a three-leaf clover in make it into four-leaves. Momoko admits she actually did that. They then reminisce about their primary school days, where they’d do things like stick those clovers on bookmarks.

Baron doesn’t have any experience hunting for four-leaf clovers – it wasn’t a guy thing. But growing up in the countryside, he did go foraging for things like mushrooms and bamboo shoots (Airi: ‘And you’d have more things for dinner.’). Momoko suggests that it may have led him towards the path of being a restaurant owner.

Momoko: But in this world, honestly, rather than money, love’s what’s important!
Airi & Miyabi: Right.
Momoko: Particularly for us as idols! More than money, it’s love. Love, that’s what it is.
Miyabi: Love!
Airi: Lurve~
Momoko: From now on too, lets live while treasuring that feeling. 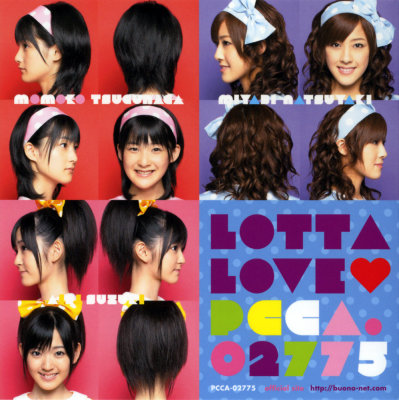 Situation: This message is from a 17 year old senior high school student, who’s preparing for university exams. She took a mock test for her university choices, and was really looking forward to her results. But there was a huge difference compared to her expectations. The reason: She had marked her answers in the wrong columns. She’s thankful that it wasn’t the real thing, but the possibility of making such a blunder has her shivering in fear. ‘Please give me some words of encouragement‘.

The girls were stifling their giggles while Baron was hamming it up, and Airi points out that Baron’s face was completely red by the end of it. He’d given the reading of the message his fullest.

Momoko comments that it’s pretty tough when you start going out of position on those marking sheets. After all, missing one would mean that you’d slip up on the ones that come after. But if you’ve made such a mistake once, you’ll definitely be careful not to make it again, checking it twice or thrice. So Momoko thinks that it’ll turn out all right. It’s a good thing, that she noticed her slip-up at this point.

Baron asks the girls if they’ve made such careless mistakes before. Airi admits that she has. When doing maths during middle and senior high, she’d get an answer, but when she redid the question she’d get a different answer. In the last three minutes she’d come back to the question, trying to pin down the answer.

Momoko talks about a time when she was doing a writing problem, and she wasn’t sure if she should write a small letter ‘a’ or a small letter ‘d’. So she wrote it in a way to make it look like it could be either letter (Miyabi:’Ah-! Sneaky!’). In the end, it turned out that the answer required a ‘c’ instead, so she was wrong on both counts.

They come back to the usage of marking sheets. Airi points out that you have to darken the choice completely, and it’s a hassle to erase when changing your answer. And then you get worried if you’re using a dark enough type of pencil. Momoko points out the usage of marking sheets have dropped recently. Miyabi has no recollection of these requirements at all – the limitation to certain types of pencils, or the order to completely fill in the circle.

Miyabi: I don’t remember taking tests that were that strict.
Momoko: Wait a second, I’m not sure if you’d call that ‘strict’.

Baron suggests that maybe the listener should use something like a charm, a misanga for example. Momoko asks the girls if they normally carry around charms, other than times when they’re facing exams. Miyabi’s interested in doing so, but she doesn’t carry them around once she’s done with them. Momoko concludes that in the end, it all comes down to the way the listener looks at things. So if she goes through the test, thinking about how she’ll enjoy her university life, it’ll be all right. Since it’s about the time of the year for university admission exams, the girls wish the listener the best of luck.