The Miya-Miya combo presents us with this opening phrase because today, on their 53rd show as We are Juice=Juice, Yuka has just noticed that the script has their colors on it! It made her feel like she was seeing something rare so it made her happy to see it for the first time. 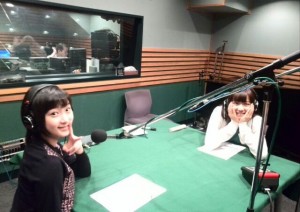 Karin has very little to add to the opening statement, so Yuka moves on to ask if Karin has any clothing staples for fall. Karin explains that she doesn’t so much rely on staples but simply picks out the things that she likes at the time, and recently she has been interested in red check shirts. She bought some but has had tremendous difficulty trying to match them with things, which Yuka completely understands, though she thinks it would suit her (by the way, if you’re getting deja vu at this point, there’s a reason). Yuka recommends trying a cardigan, but Karin is stuck on what color of the check to try and match with. Yuka has been into long black skirts because they’re more mature and cover up plenty of things she might want to hide, so she bought one and actually wore it to the recording today. Karin admits that she has been interested in them but didn’t think she could pull it off when she tried one on, but it really suits Yuka and she looks very mature and stylish.

The first letter comes from aMa no Jaku, who congratulates them on their new song release and says that they saw them perform as the opening act for Morning Musume at Budokan. Their performance made them feel like the 5 of them are going to move to bigger and bigger stages in the next year and hope to see them perform at Budokan soon. They think it would be amazing to do one big juice toast with all of the Juice=Juice family in Budokan. Another letter comes from Watada, who has been listening to their new songs since they got the CD and has been in love with Date ja nai yo since seeing them look so good performing it live in concert. This makes the two of them happy, especially the part about doing a toast in Budokan, which Yuka had thought of doing before. Karin makes a pun out of Budokan and says that they should all have grape (“budou”) juice. You didn’t hear that from her, though.

Another letter comes from Weekly Hello!Pro Beauty, who says that they went to Harajuku recently and were surprised to see advertisements for Juice=Juice there. They all had solo posters with their own catchphrases on them, too, so they were happy to see them getting the exposure. Yuka went out to see all of their ads between jobs with her manager and she took pictures in front of all of them trying to imitate their poses. However, after they were done and she looked back at all the pictures, she was a little off in all of the poses. She couldn’t quite get KanaTomo’s expression right and she used the wrong arm in trying to copy Uemu’s pose so it was all very unfortunate. Karin hasn’t been out to see them yet but she really wants to. She hopes the fans can see them, at least. 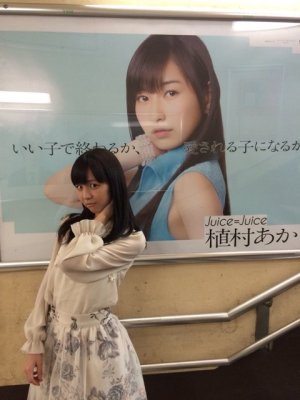 Lately Karin has been staring at her phone a lot, because it’s what she usually does in her down time, but she’s been looking more at the buttons. Each of the buttons has a character, and each of the character has ink on it, but over time the buttons become sticky and the ink runs away. Perhaps this is inevitable for the phone and the buttons, but she has spent a lot of time thinking about them. It causes her to have a rather stupefied look on her face, though, so a lot of people have been asking her what’s wrong lately. Still, if she can get others to think about things in a different way, she’s happy.

Yuka has noticed Karin looking spaced out, too, but now she knows why. She wonders if she should stop bothering Karin when she does this, but Karin reassures her that it’s no trouble and she’ll snap right back to normal if someone starts talking to her.

After an enthralling round of rock-paper-scissors, Karin chooses the word red to end the show with because she is rather obsessed with the color red for the fall season. You might have guessed this, since she has talked about her red check shirt twice now, but she hopes to partake in all forms of red this season. The mature reds, the happy reds, all of the reds. She has big plans. 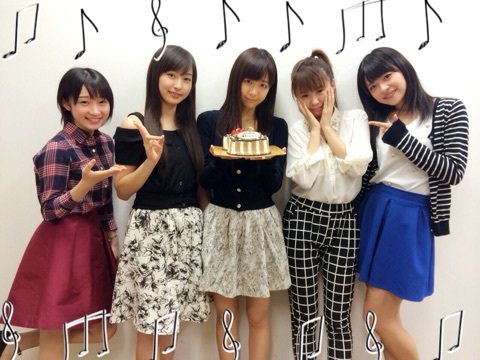 The most troublesome shirt in the world