Karin brings us this opening word as she has come to the conclusion that she loves lumpy foods. She loves strawberries, as most everyone knows, and they’re sort of lumpy and pulpy but she finds that it isn’t just the taste she enjoys but the texture. Uemu asks if this goes for other things as well, like salmon roe, and Karin affirms that most of her favorite foods are on the lumpy side. She also prefers to have her drinks be thicker and pulpy, which Uemu says she also enjoys. Karin adds that she has noticed Uemu also shares this affinity for pulpy, lumpy things, since they both enjoy kiwi seeds and such in their juice whenever they get it, but she also remembers something that happened recently with Uemu and food. The Juice=Juice members all went out to eat and they asked Uemu if she wanted anything in particular and she said, “takenoko,” or bamboo shoots. However, when the plate got to their table, Uemu started freaking out and asked why these perfectly normal bamboo shoots were so wrong. It turns out she had meant to order “kazunoko,” or herring roe, instead. Uemu retorts. “But they look the same! They have the noko in common you know so it’s easy to confuse them!” Uemu said what surprised her was that there had been a picture of the kazunoko that she was ordering from and they came out looking so different. 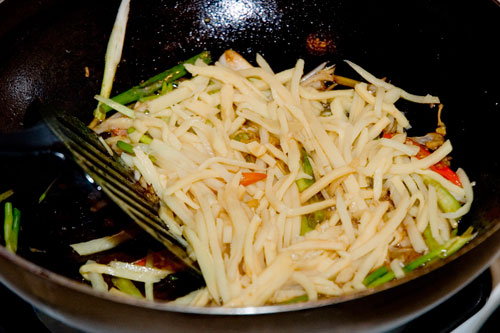 This is not herring roe, despite what the ‘noko’ might lead you to believe

Karin continues in the food discussion and asks if Uemu has any fall foods she’s looking forward to eating. She says that roasted sweet potato tops her list, although she enjoys miso soup this time of year as well. Karin enjoys sweet potato as well, although lately whenever she really wants one she cooks it in the microwave to get it quicker. She discovered this when she wanted one but there wasn’t anyone around selling them. She and Uemu both delve into their best sweet potato salesperson impressions as a result.

The first letter comes from Never-ending Rose Quartz. They saw Juice=Juice’s Hello Kitty musical videos and were impressed by how well-spoken and professional everyone seemed. Uemu in particular seemed to be much more precise with her speech and they think it might be thanks to their time on the radio show. However, they also want to know if they can share any backstage stories or anything they’re excited for in the play. They want to know what they think of Miyamoto Kitty and Male model Tomoko, as well. Another letter comes from Dharmalaksana. They point out that Juice=Juice’s abbreviated name, Juu=Juu, leads to October 10th (for 10/10, juu juu) for their group day. They want to know if they plan on following their senior group C-ute in having special events for that day that are slightly different from normal.

Miyamoto Kitty says that Hello Kitty is really very idol-like and she’s so cute that Karin wants to be like her someday, so she hopes that she can a sort of Karin-ified version of Hello Kitty to life in this play. Uemu is still hung up on the fact that Never-ending Rose Quartz said that she had grown a lot in her speaking and is overwhelmed with happiness that someone would compliment her like that. “I’m doing my lines pretty good today, aren’t I?” As for Juice=Juice day, Uemu thinks that a juice toast will be fine.

Karin: I wonder what kind of juice we would use.
Uemu: (whispers) I wonder what kind… Oh, chocolate juice for me!
Karin: Oh, okay, what should I do then? Maybe I’ll mix different things that I like together, so first I’ll put in sushi, then strawberries–
Uemu: Nope nope STOP STOP STOP
Karin: But I think they might end up tasting pretty good together.
Uemu: Nononono, let’s eat each one on its own. 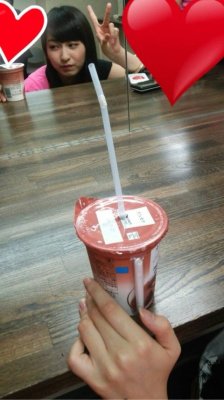 At night Karin was looking out at the sky and was thinking about the stars as they sparkled. From where she was sitting, they seemed so much smaller than her, yet if she were to get closer to them, they would be so much bigger. She thought about how even though they’re all hundreds of millions of light years away, they’re still sparkling even where she is. She thought that for the stars, her life is just one page among many, so to engrave herself on that page, she needs to live her life day by day and leaving her mark. She’d be truly happy if the stars could look back at her and gaze at how sparkling she is, as well.

Uemu has difficulty comprehending hundreds of millions of light years.

Man, I want to run 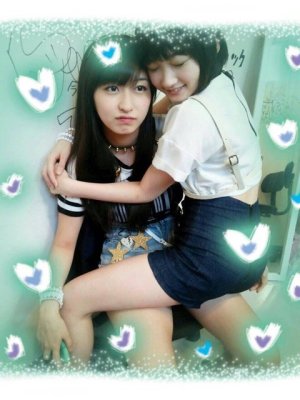 Not to be trusted.