Momoko announces that September 13th – or more generally, the second Saturday of September – is family karaoke day. None of the girls have gone for karaoke with their family recently, but Momoko admits that she generally goes alone. The others find it kind of sad that she goes alone, but Momoko shrugs it off and says that she finds it perfectly fine. Furthermore, she can go at it for about two and a half hours, usually finding time when she has gaps to fill in her work schedule. Though it does make her a bit hoarse at the jobs she has later.

However, she does have a complaint.  Once, when she was paying, she heard the guy at the reception whisper something on the lines of, ‘Look at this girl, going for karaoke all alone’, which irritated her.

Miyabi: Wouldn’t it be tough if you get exposed? It’ll be like, ‘Eh Momochi, don’t you have any friends?’

Momoko: It does suit my image (the girls laugh), but that would definitely suck.

Momoko: And so, I put on a mask, face downwards, I rub my eyes like they itch, until my face is completely unrecognisable, then I go.

Airi: You go to that extent and you still want to go?

Momoko explains it’s easy when she enters, since she can act like she’s waiting for her friends. It’s when she leaves that she has to put on a disguise, and go like ‘(cough) My eyes itch because of hay fever’ as she leaves the karaoke store.

Although she can’t go for karaoke alone, Airi states that she’s fine with going for gyuudon alone. Momoko and Miyabi are still amazed by this revelation. Miyabi starts getting grilled about places she can’t go alone to. While she can’t imagine going to movies or for yakiniku by herself, she’s all right with large chain restaurants.

Going back to solo karaoke, Airi still imagines that it would be tough when you had to go to the reception desk.

Momoko: Well, today may be family karaoke day, but I definitely recommend going for karaoke by yourself.

Miyabi: No way, I recommend going with family.

Momoko: Okay then, with your family. So that you won’t thought of as a loner. 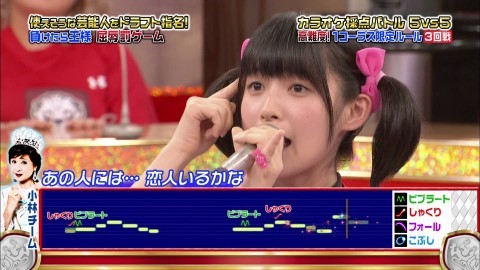 Discussion topic: As Respect for the Aged Day would be celebrated two days after the broadcast, the girls were asked to discuss on the topic of ‘My beloved grandfather and grandmother’.

Momoko notes that they don’t really give presents of Respect for the Aged Day, as compared to Mother’s Day or Father’s Day. Airi says that it’s customary for her to call up her grandmother on that day. The other girls find her conduct admirable.

Airi then relates that ever since she passed the H!P Kids auditions, she’s only been on tour to her grandparent’s home prefecture once, through last year’s Naruchika, meeting only at the ticket barrier. Momoko gets a confirmation it was the only time in her 12 years as an entertainer. But Airi got a Hawaiian quilt from her grandmother, and she mentions that they communicate through e-mail.

Momoko: I got in touch my grandmother, ‘Sorry, could you bring two days worth of contact lenses?’

Miyabi: You used your grandmother to that extent?

Momoko: ‘Grandma, sorry! I need two days worth of contacts!’ After saying that, she brought them to where we were holding the event, and I was like, ‘Thank you, thank you so so much!’ Then she gave them to me proceeded to head home.

Momoko: Like, ‘Thank you for always being willing to send me my contacts’?

Momoko comes back to the topic of Respect for the Aged Day, that even though people don’t celebrate it in particular, it’s an opportunity to show gratitude. Miyabi tells the girls that her grandmother has started using LINE, an internet messaging service. Airi and Momoko find it amazing how up-to-date Miyabi’s grandmother is. Miyabi regales that her grandmother is using it often, sending photos as well, so she’s been enjoying it recently. She still isn’t using the stamp function yet, though. Miyabi had just taught her how to save photos. The other two are finding this story adorable. Airi says that her grandmother just learnt how to make a new line in an e-mail.

Momoko sums up asking everyone to keep in touch with their grandparents. 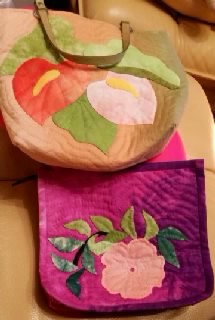 A Hawaiian quilt Airi got from her grandmother

This episode’s request for advice comes from a 33 year old who just transferred jobs in spring. He’s recently been worried about relationships at work – the company he works at has weekly meetings for new product ideas, but all his ideas get turned down. Yet when his seniors present an idea that is virtually the same as his, they get praised for having a good idea. He feels that the bosses look more at the presentation rather than the content. Feeling mortified and not wanting to be labelled a no-good employee, he asks for advice.

The gravity of the scenario has Momoko at a loss, and the girls agree that it’s a complicated situation. They admit that when it comes to romantic situations, they can earnestly give advice. However, day-to-day relationship issues like this are more complicated.

Airi says that she can sympathise with this person. Within ℃-ute, there are times when Okai Chisato says the same things that Airi does, but Okai manages to get the laughs. According to Airi, there just happen to be people who are better at speaking, who have louder voices, who have expressive faces.

Momoko suggests that his character might be the reason behind the difference in treatment. If he’s a funny person, who always makes slip-ups here and there, it might come back to hurt him. For example, he could be similar to Momochi, who gets laughs through her self-degrading character. While a normally serious person would be devastated at a slip-up, someone as teasable as Momoko would probably get asked why they’re being so solemn when they’re trying not to slip up, even when talking about normal things.

Momoko: It would be best to be the same type as Miya.

Miyabi: Able to do anything?

Airi admits that it might sound a bit severe because it’s something that he can’t help, but she wonders if the listener is just terrible at speaking. Momoko then hits upon an idea – if he’s finding it difficult to talk about it, perhaps he could put it all in paper and use that to present.

Airi agrees that it might be doable, and mentions that when she has to make presentations, she makes her Powerpoint slides colourful to compensate for her lack of speaking ability. Momoko quips that the usage of colours might not fit what the listener needs.

Momoko finally suggests that he power through with passion – ‘Regardless of whether I’m good or bad at words, I want this idea to be a success! It’ll make everyone happy!’ – to get through with his passionate feelings. Airi chimes in, suggesting that he  try emulating TV shopping presenters – ‘You got no other choice! No one else can pull of this project besides me!’. Momoko concludes that if the listener feels like he can’t pull it off with words, he should trying doing his best to express himself through his passion.