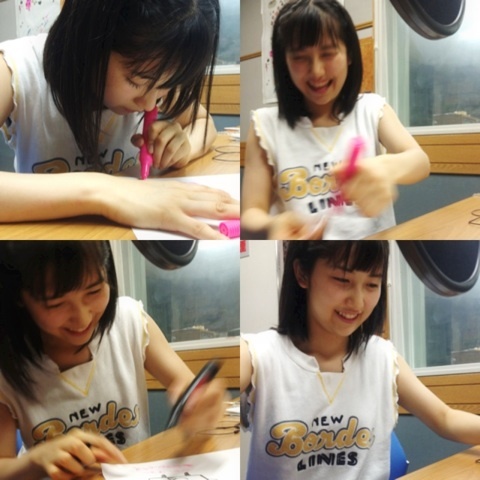 Fan letter #1: Although Maa-chan now freely calls Sayu “Minishige-san” and whatnot, the listener assumes that the two weren’t quite as close back when she had just joined the group. The listener asks what Maa-chan’s early impressions of Sayu were, and what made the two to become so close.

Maa-chan says that before she’d joined Morning Musume, her friends were telling her that Tanasa-tan and Minishige-san are both really scary and that she should really watch out for them. But Maa-chan says that the member who seemed really scary to her was actually Niigaki-san. Why? “Because she was wearing a hood.” Sayu laughs and asks if that wasn’t just Niigaki-san’s outfit for a song, and Maa-chan says yes. Still, her early impression of Niigaki-san was that she was basically the devil herself.

On the other hand, she didn’t find Tanasa-tan or Minishige-san the least bit scary. When she reported about this to her friends back in Hokkaido, everyone’s general impression of Minishige-san at her school got considerably better, to the point that someone from her school even tried applying for the group in its 11th gen auditions because they admired Sayu so much. Sayu says she’s happy to hear this.

Maa-chan names Kimagure Princess and Resonant Blue from Morning Musume, as well as Abe Natsumi’s Koi no Hana and Matsuura Aya’s Zutto Suki de Ii desu ka. Sayu says these are all pretty unexpected choices and says that Maa-chan’s probably the type who gets into the songs themselves more so than the music videos. “That’s right,” says Maa-chan. Sayu adds that Maa-chan is really knowledgeable about H!P’s history and knows lots more old songs, too. Maa-chan names one more song she really likes: Nochiura Natsumi’s LOVE LIKE CRAZY, especially Goto Maki’s solo concert version of it. She calls it really cool and Sayu says she likes it as well.

Fan letter #3: The listener talks about how he went to see the Lilium musical and how he was especially taken with Margaret’s (Maa-chan’s role) cuteness and singing. He asks Maa-chan what the most difficult part about playing Margaret was, and what Sayu thought about Maa-chan’s performance.

Maa-chan says she had a lot of trouble remembering the names of the other characters, notably Jasmine (Tanabe Nanami), Clematis (Kaga Kaede) and Mimosa (Sasaki Rikako). She had so much trouble, in fact, that she once even called Kaga-chan by her real name instead of her role name in front of a live audience. She says she made the director so frustrated with all these mishaps of hers, he finally gave in and said “fine, let’s just try it with you calling them by their real names then“… but suddenly Maa-chan realized she’d forgotten Tanabe’s real name, too. Maa-chan says that she even suggested to the director that she call the three not by their names, but by names of vegetables or fruits. Needless to say, the director wasn’t humored by her proposition.

Maa-chan also talks about how she slightly changed the arrangement of her vocal lines each time they performed the musical, and that she did this all on her own accord. Sayu praises Maa-chan for being so multi-talented and says she must’ve felt really confident about herself in the role of Margaret judging from the expression she had when she was on stage. Maa-chan says she did indeed love the role.

Maa-chan: So what did you think about my role, Michishige-san? … Oh wait, you just told me!
Sayu: Um, yeah, I just told you two seconds ago…

Fan letter #4: The listener asks what the two hosts would do or where they would go if they had the day off and were to spend it hanging out together. 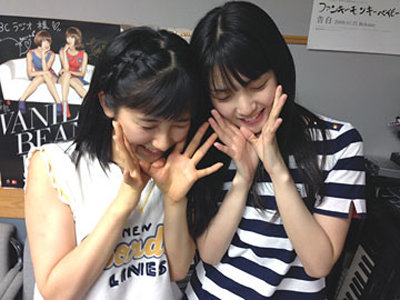 Since Maa-chan is the guest this week, she’s going to be singing the parodies this time. Sayu says this is probably the first time she’s ever had a guest do this corner in her stead.

Parody #1: “Oyu wo kake / futa wo shite / sanpunkan mattara / oyashoku no ramen dekita yo” (“Pour in hot water / close the lid / wait three minutes / and your late-night ramen is ready“)

Maa-chan says this one was pretty difficult, especially getting down the rhythm for “sanpunkan.” Sayu says Maa-chan sounds really cool, what with her great sense of rhythm and so. She’s happy she looks to be having so much fun.

Sayu gets increasingly fired up over how awesome Maa-chan is, and Maa-chan is happy to hear it.

Maa-chan: This is so fun! I love parodies!
Sayu: In that case, make some of your own and send them over to this show next time.
Maa-chan: Sure!
Sayu: …There’s no way you’re actually going to bother.

“You just pretty much gave up at the end there, huh,” Sayu notes. Maa mentions that she doesn’t actually see Ikuta being all KY that much these days. Sayu agrees that Ikuta has indeed gotten more reliable as of late — she’s a lot less KY and she finds that she’s really easy to hold a conversation with. Maa-chan replies “I know, she’s gotten so reliable these days!” Sayu is quick to point out that she’s pretty sure even Ikuta doesn’t want to hear that coming from Maa-chan of all people.

Sayu expresses doubts as to whether this last one is even okay to broadcast on the air anymore. She says she’s also not quite sure why there’s a “hihihi…” in the lyrics there. Maa-chan says this corner is super fun, and says she’d like to try doing it for Brainstorming, too.

Since Sayu has a guest in the studio, she once again leaves Maa-chan in charge of the sexiness this week. Maa-chan negotiates that she’ll only say the first four syllables and Sayu gets to say the last one. Sayu agrees.

Sayu once again blames Maa-chan for not being the least bit sexy. She then asks her to try one last time to at least say the final “ru” in a sexy way: 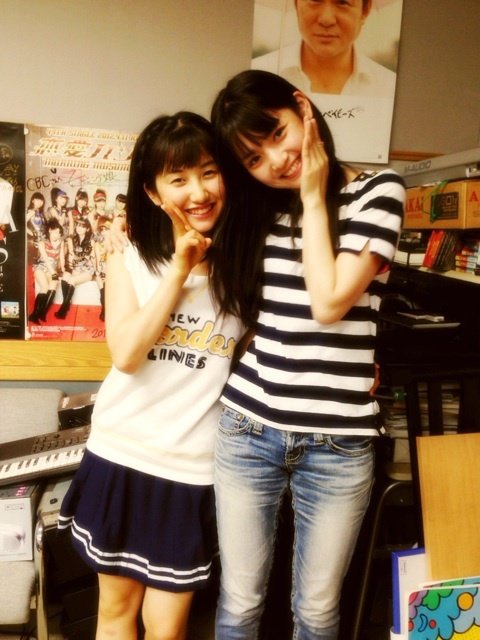 Maa-chan: I had so much fun! I’m going to come again next week!
Sayu: No, you’re not.