Kananan and Meimei begin by talking briefly about several subjects including the Obon festival in Japan, their upcoming tour FULL CHARGE and the places they’re most looking forward to visiting on it (Meimei: Okinawa, Kananan: Wakayama) as well as recommended souvenirs — Kananan recommends the two Osakan delicacies takopatie (takoyaki sweets) and butaman (pork buns) from a store called 551 Horai, whereas for souvenirs from Gunma, Meimei recommends Shichifukujin arare (a brand of rice crackers that come in several flavors).

Kananan starts the corner this week by reading a letter.

Fan letter: The listener says they watched the movie Usagi Drop thanks to Kananan previously introducing and reviewing it on this corner. They call it a wonderful film and say it made them feel all warm and fluffy inside. They say they’re looking forward to more movie recommendations by Kananan, and request that she do The Grand Budapest Hotel next. (Kananan also touched briefly on this film when she was a guest on LoVendoЯ no Love-On! #59.)

Thus, Kananan does as requested and starts reviewing The Grand Budapest Hotel. Kananan says she went to see this film with Fukuda-san, and explains that it’s about a high-class European hotel called the Grand Budapest Hotel. A murder occurs (Meimei: “*gasp!*“), and the protagonist who is a concierge at the hotel is suspected of committing it. The story follows him and a lobby boy who also works at the hotel as they try to find the truth behind the murder.

Nakanishi talks about how Western films are sometimes considered difficult to understand by Japanese audiences — Kananan mentions how she’d previously asked Take-chan to watch one with her, but she was reluctant since she hasn’t watched many. (Meimei, on the other hand, says she thinks they’re interesting.) Kananan says she recommends this film especially for people like that since she finds it so comical and cute, and because it’s about human relationships. The film shows you how even complete strangers can with time become as close as family. She says that all ages will find things to enjoy in this film: it’ll make the older audiences think, whereas the kids will be able to enjoy its cute visuals. 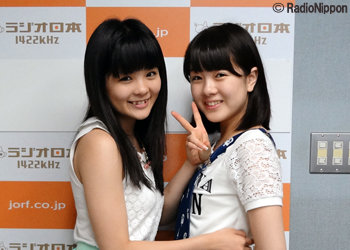 Fan letter #1: The listener says he’s in a line of work where he’s often talking to people around the same age as Kananan and Meimei. However, since he’s about 10 years older than them, he has no clue what to talk to them about. He doesn’t know what’s popular with kids that age and whatnot, and asks the hosts what kind of things he should talk about to be able to hold fun conversations with these kids.

Meimei says one has to take into consideration that the kids might not feel like being very talkative in the first place as they could be going through a rebellious age or just puberty. She says it kind of depends on the listener’s job, too. She remembers how back in her elementary school their teacher would have a really tough time because there was this certain bossy type among the children in her class. She says that kind of thing must be really difficult to deal with.

Kananan says that rather than the listener initiating conversations with the kids, he should make himself more approachable by always smiling, remembering to greet them properly and maybe even talking about things like his favorite movies and other interests. This way the kids might feel more open to talking to him, too. Meimei adds that it’s not good to attempt talking to them too much either, and not talking to them just because it’s your job, but because you sincerely want to. “If you try too hard,” Meimei says, “they’re going to be able to tell you’re just trying to suck up to them.“

Fan letter #2: The listener says they had a lot of fun at S/mileage’s Budokan concert, and mentions especially how they thought it’d be just filled with laughs what with the “internal conflict” video and pro wrestling… until it led to the opening of Tachiagaaru which made them cry. Plus, seeing how Rinapuu began to cry made the listener cry even harder — for this, the listener calls S/mileage “unfair.” (Meimei: “eeeeh?!“) The listener asks what the hosts think was the most memorable part of the concert.

Meimei, too, thought Tachiagaaru was the most memorable part and notes that Rinapuu did indeed start crying during it. Meimei says it’s usually her who cries during concerts, but she actually didn’t do so even once at Budokan: somehow seeing Rinapuu crying made her feel like she had to stay strong and “protect” the other members. Kananan says that she felt like she’d start crying, too, if she saw Rinapuu’s tears, so she made herself look the other way.

For her most memorable part of the concert, Kananan names Please Miniskirt Postwoman. While Tachiagaaru was still relatively simple, she thought Miniskirt’s dance was really hard. She says it has all kinds of difficult steps, everyone has a different choreography, etc. She had such trouble with it at their first lessons for it that her manager got so angry at her, he threatened that he “didn’t know what would happen if she doesn’t do better by next time.” Kananan, too, realized how bad she was which made her feel anxious. Back then she was still commuting between Tokyo and Osaka, so she’d always use her long shinkansen trips to memorize the dances, too. All these hardships she had to go through in learning the dance make Please Miniskirt Postwoman the most important and memorable song for her.

Meimei: I want to see The Grand Budapesrrstfflro… Hotel!
Kananan: …And with that, good night.

Henkka: I’m pleased to announce that Hello! Pro Radio has found another great addition to its ranks! Lurkette will be in charge of summaries of future episodes SS1422 starting from the very next one (which is going up right after this one.) Do yourself a favor and also check out Lurkette’s various H!P translations (including great interviews and threads from 2ch) on her H!O blog!