The Chocolate Combo (as in that they both like chocolate, not that they are both made of chocolate, as Tomo accidentally introduce them) is back in the studio. Tomo gives us the opening phrase, as lately she has been asked a lot if she has lost weight. They recently performed at a girls-only event and it was brought up several times, and while she’s flattered, she hasn’t lost any weight at all. However, she is determined to get herself into shape and she is aiming for a better body than she currently has.

Speaking of chocolate, Tomo reminds Uemu that in the last broadcast, Yuka and Karin laughed about actually being able to eat the chocolate name plate on her cake since Uemu wasn’t there. Uemu is highly offended, she does not eat the chocolate off of other people’s cakes… except for when she does, which involves Yuka most of the time. Tomo thinks that it’s fine if she takes it from Yuka because she’s the leader and she’s expected to put up with such behavior. Oh, right, happy birthday Karin. Uemu says that she and Karin had planned on exchanging birthday presents since their birthdays are not very far apart. It was Uemu’s idea, and yet when the time came to exchange them, she had completely forgotten to get Karin a present. Maybe next year. 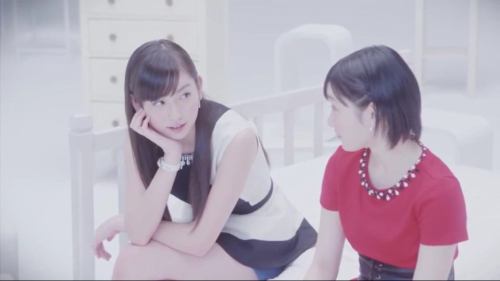 Uemu does not care about your birthday, Karin. Get over it.

Lots of letters have come in about the play, and the one they choose to read comes from Rosanko. They went to see their play, Koi Suru Hello Kitty, and highly enjoyed it. They couldn’t believe that this was the first play for many of them and liked so many things that they can’t summarize their feelings on it. They did have one issue, however: they are now in love with Yuuya (Tomo’s male character). They hope that someday, at a handshake event, perhaps, Yuuya will reappear and they’ll be able to meet him. One can dream.

Tomo says that she’s had a lot of people tell her that they’ve fallen in love with Yuuya, like at the high-five events they’ve been having to promote the play. It’s funny to her because now that she has played Yuuya, she has gotten a lot more attention as Tomoko from women. Playing a person of the opposite sex has been a challenge, but definitely a good learning experience. They both remark upon the wonders of acting and how you can see it in everyone’s eyes when they’ve gone from being themselves to being someone else. They’re learning a lot from this play. 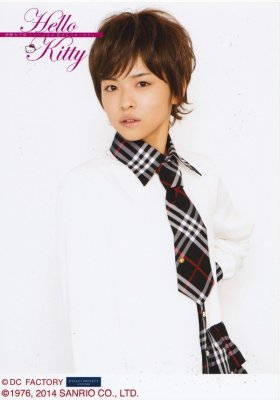 Yuuya gets all the ladies

Aside from the many letters about the play, they also got some with more general questions. One letter comes from Wataru, who talks about the online-limited talk that Uemu and Tomo had a while back about what hairstyles they wanted to try. Tomo had said that she wanted to try an afro and they want to make sure that was actually what she meant. Tomo is dead serious. She doesn’t want to permanently have one; she just wants to try it once and see how it looks and feels. As for Uemu, she wants to try adding some color. A while back she was getting extensions put in and she noticed that the hairdresser had several different colors of hair extensions, including pink and green. She thinks she’d probably just take them out once she had seen them in, but she’d still like to try something like that someday. This discussion reminds Tomo that a while back Uemu had promised to be better about blow-drying her hair and not just letting it sit there wet. Uemu confirms that she has not lived up to this promise, as expected.

Tomorrow is Tomo’s younger sisters’ birthday. Tomo is actually one of 5 children. She has an older brother and three younger sisters, the youngest of which are twins. She wants to wish them a happy birthday, but she has honestly forgotten how old they are. She’s pretty sure they’re 14 or 15. Well, never mind. Anyway, she’s still a good older sister because she made them a chocolate cake with whipped cream and chocolate name plates and got them gifts of cookies and body mist. When they were eating the cake, she asked them if it was good, and they said that the strawberries were the best part. This was highly disappointing, since the cake that she actually made wasn’t worth complimenting. Uemu thinks that this is a very sad way to end the show. 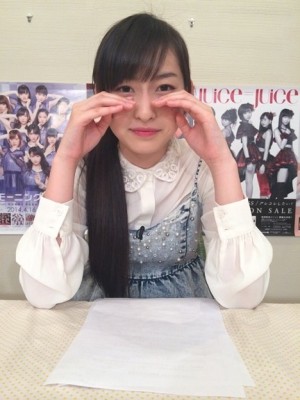 We can’t let it end this way.

“I like the moon, too. Out of all the members, Miyamoto-san and Miyazaki-san talk a lot about the moon and the sky and post about it in their blogs a lot, but I don’t feel like the ‘I like the moon’ character has really caught on.”

So there you have it. She likes the moon, but she’s not so haughty to actually say so, gosh Karin.