Chii asks Kumai-san what the month of September signifies to her, who answers that for her it means the period in which one has to switch gears after the summer vacation, which can definitely lead to a bit of melancholy. Chii notes that September kind of feels like the second May Disease of the year: the seasons are changing, the weather is bad, and the city just kind of feels grey. Overall, it’s a bit of a downer of a month.

Chii appears to remember something, chuckling. She says that on the upside, September also has °C-ute no Hi. The two immediately take back everything they’ve just said and agree that September is a fantastic month.

The two note that this is the first time in five weeks that they’re hosting the show just by the two of them, and agree that doing so feels more laidback somehow.

The studio today is also different from the one they’re usually recording BZS1422 in, and they report that Chii’s microphone was acting up before they started and earlier they even heard some weird sounds coming from the direction of the door. Thus, they’re not really all that happy with this studio. It’s actually where they used to record before moving to their current one. After the move, the two used to say that they preferred the earlier studio; Kumai-san guesses that this must be why the staff brought them back to record here again, but it’s just no good now.

Chii announces that the staff are staring at them in disbelief right now. 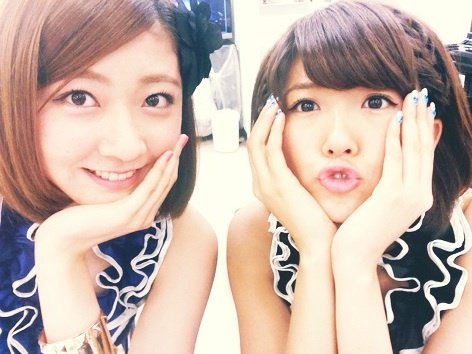 Question #1: This first question is something that Kumai-san asked in an earlier episode: “what exactly is episodic memory?“

Fan answer: The listener feels bad for confusing Kumai-san with his earlier mail that talked about episodic memory, so he decided to send another one to clarify. He gives a thorough explanation of the subject — check up on Wikipedia if you need to refresh your memory on what episodic memory is.

Kumai-san says she now completely understands! “So episodic memory… is basically just memory, right?!“, Chii says excitedly. Kumai-san and Chii agree that it’s been a long while since both of them were this satisfied with an answer.

Question #2: The next one is an answer to another question posed in an earlier episode, this time by Fukuda Kanon. Her question was: “how do we make the 2nd gen members of S/mileage understand the greatness of Berryz Koubou?“

Chii and Kumai-san both give their full approval for this idea. First of all, Chii wants to know just how much (or little) the 2nd gen members actually know about Berryz, so she’d want the staff to make some sort of a “Berryz quiz” on their show. Upon hearing her suggestion, Chii announces that the staff are smiling awkwardly. Kumai-san says that the quiz could begin with simple questions and gradually advance to difficult ones only true Berryz fans would know.

A staff member then suggests that Chii and Kumai-san themselves think up the questions that they could then present to SS1422. Chii says this sounds like a good idea, but adds that if it looks like the 2nd gen members kind of hate this corner, they could limit it to only when Fukuda Kanon (aka the biggest Berryz Koubou fan in the world) is visiting SS1422.

The hosts comment that they’re pretty happy with this resolution, and ask that the staff make this happen. 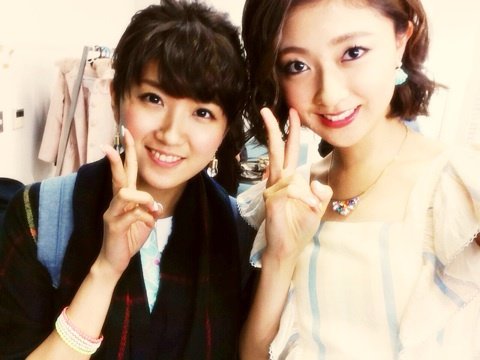 New question: Chii has a new problem. She’s currently 22 years old, and she’s heard that your skin starts to age in your twenties, leading up to a serious nosedive in your thirties. Chii obviously wants to continue having nice skin, so nowadays she tries to limit using makeup only to when there are cameras around. Recently, though, she’s being told she looks sleepy when she’s not wearing any makeup. This can be bad in situations like rehearsals or meetings where people might think she’s not paying attention. So her question is, should she remain makeup-free and preserve her skin but look sleepy, or wear makeup but risk faster aging of her skin?

Kumai-san says that as a woman Chii should probably place more emphasis on the future well-being of her skin, and Chii says she does indeed want to have smooth skin even in her thirties and forties. Kumai-san suggests only wearing makeup partially, like only on her eyes for example. Chii says she tried this, but when she only applies makeup on her eyes, she’ll also want to do her eyebrows. “Well, what about doing your eyebrows, not using shadow for your eyes, and only using a bit of eyeliner?“, Kumai-san asks. Chii answers that she’s not good with the “only applying little” thing — she’ll just end up doing her makeup as usual.

Chii asks if Kumai-san is only wearing a little bit of makeup today herself. She says she is indeed: 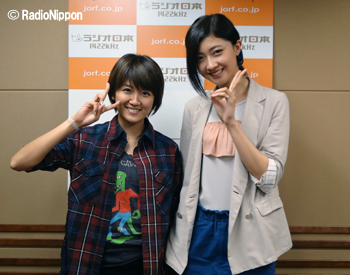 Fan question #1: The listener asks Chii and Kumai-san for help with his question. In short, what he wants to know is: “what is the deal with ramen shops and the oomori/kaedama thing?“

These are both options for people who’d like to have more noodles with their ramen: oomori (large serving) is what the name implies, but kaedama (second serving) means they just drop a second batch of noodles straight into your ramen bowl after you’ve eaten the first one. Kaedama seems to only be a thing with tonkotsu (pork bone broth) ramen, he says, but even some tonkotsu ramen places have the option of oomori instead of kaedama.

“But if it’s just a matter of people wanting to get their noodles as fresh as possible, wouldn’t it be better for all varieties of ramen shops to offer kaedama? Just what are the differences between these two options?“, he asks.

Chii answer: Reading this question aloud, Chii says she just realized the correct answer for it. Kaedama is only available at tonkotsu ramen shops, but the listener suggested that it should be available in all other ramen places, too — Chii says this is unacceptable. Why?

She explains it’s because the noodles for tonkotsu ramen are thinner than average, which means that they’ll will mix with the soup faster than usual even when just added into the bowl later on. On the other hand, normal noodles are thicker so if you just drop them into your bowl and eat, it’d taste like you were eating the two things separately. “This is it!“, Chii exclaims.

After a brief silence, Chii announces that the staff members don’t look like they’re in agreement with her assessment. This, however, is the only answer the listener is going to get. 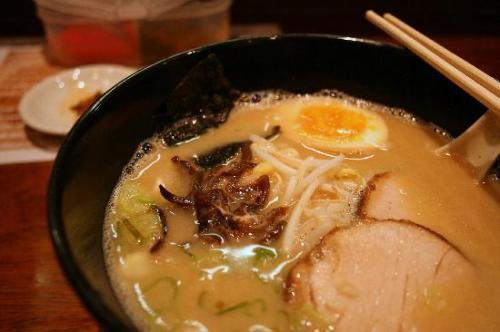 In closing, Chii and Kumai-san wish a late happy birthday to the “princess of Berryz Koubou,” Natsuyaki Miyabi! They assure her that they didn’t forget: they remembered it last time all the way up until the meeting before recording… but then the thought just kind of disappeared somewhere. (I’m pretty sure you call this “forgetting.”)