Kame: The end.
Gaki-san: … That’s all? (laughs)
Kame: This person… Yuto-san? Are you good with this? Is this the kind of life you hope to be leading?

Fan mail #2: The listener congratulates Gaki-san for finally having gotten to start up her own blog. They wish her the best of luck with it.

Gaki-san says blogging has been lots of fun. She also enjoys reading the comments, where fans take the time to leave their thoughts on their concerts… or just reporting to her about the various things they saw Kame doing. In fact, even their manager can now often be seen with a camera in hand, trying to take pictures of Kame doing strange things so they can be uploaded on Gaki-san’s blog. 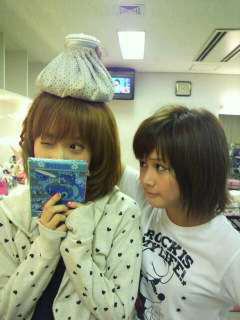 Fan mail #3: The third listener wishes to know if the hosts enjoy going to the hair dresser’s or not.

Kame has been visiting the hairdresser’s a lot as of late. Some time ago she cut her hair short, but it ended up looking completely different to what she’d been expecting. “I want them to give me my hair back,” she says.

Kame: I won’t be pleased until it grows a bit longer.
Gaki-san: Well, then it’s just a matter of time. Time will fix it.
Kame: Exactly. Time is money.
Gaki-san: … You sure like saying that sort of incomprehensible stuff every so often.
Kame: Shouldn’t you snap a picture of this moment for your blog then?!
Gaki-san: The listeners don’t want to listen to some random camera shutter sound.

Fan mail #4: The listener says they had to think for some time if they should send this message in to the show or not. Some months ago, something happened to them and it made them lose hope to the point where it made them feel exhausted to even be alive. During a time like that in their life, they happened to overhear the sound of the hosts laughing on the radio. They tried listening in to their conversation, and for some reason, the listener found themselves smiling. They felt distinctly happy. Ever since that day, they’ve been looking forward to the airing of the show every Monday, and life for them now feels more enjoyable. The listener gives the hosts their utmost gratitude, and wishes them to know that there are sure to be lots of other listeners who receive that kind of strength from Niigaki and Kamei — who are themselves two people working in the field of public entertainment which is surely a very difficult thing to do.

The hosts are obviously very glad to receive this message. “I don’t get it — all we’re doing is laughing!,” Kame says. Still, the message made the two realize how blessed they are — them simply getting to have fun on the radio like this is becoming someone else’s strength! Gaki-san says that hearing from this fan has convinced her that it’s worth it to do this show.

Gaki-san: We should keep laughing.
Kame: Yeah. Let’s keep only laughing!
Gaki-san: Only laughing? That’s going to be so tiring! I mean, it might be fun for us, but the people listening are just going to be like… “What’s up with these two?! They’re just laughing!”
Kame: Ahaha. (laughs) 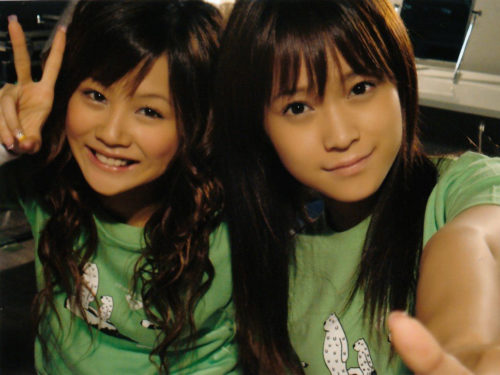 Fan mail #5: The listener wishes to know if the hosts are able to wake up instantly in the morning, or if they tend to hit Snooze and sleep for a few minutes more.

Gaki-san: Like, today… I woke up at five in the morning.
Kame: Huh?! Why?!
Gaki-san: I don’t know. It was weird. It was just today. But like, I couldn’t fall back asleep, so I went to take a shower–
Kame: ♪ Shower shite, kagami wo mitsumeru ♪… Ah, so you checked out your body in the mirror?!
Gaki-san: No.

Kame’s silliness aside, something interesting happened to Kame this morning. She was awoken by a phone call from her older brother. Kame had a bad feeling about it — she figured he was going to ask her for a favor or something. When she picked up the phone, her brother chcked to make sure Kame had indeed gone on a bus tour in Nikko the other day. Kame, puzzled, answered yes. Her brother then asked: “I was just wondering… why was it in Nikko of all places?“

Kame: He just seemed so suspicious… I figured he wasn’t actually asking me the question he really wanted to ask.
Gaki-san: Right…
Kame: So I flat-out asked him, “what are you getting at?!”
Gaki-san: (laughs) You’re an awful little sister! Why would you doubt him that much? He’s your blood-related older brother!
Kame: Yeah… but it was suspicious.

Kame’s suspicions turned out to be misguided. Her brother laughed, blamed her sister for being an awful person, and hung up on her, saying he needed to use the toilet. 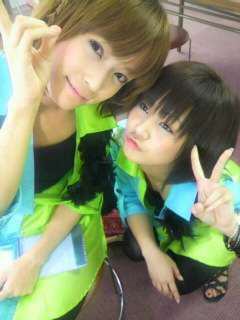 Kame’s music recommendation: Amuro Namie – ALL FOR YOU

Gaki-san: We’re waiting for your messages! Go ahead and ask us anything, such as “is it true that Kame is actually quite a fast runner?” Anything goes!