We’re right in the midst of Golden Week! To celebrate, this episode will be a fan mail special.

Fan mail #1: The first message is from a listener who has only just recently become a fan of Morning Musume. Through viewing the group’s live videos on the internet, they’ve noticed something peculiar: Sayu seems to kiss a lot of the other members quite often. And yet, she never seems to do so to Gaki-san or Kame even though she is close with the both of them. Why?

“What do you think about all this kissing business?,” Gaki-san asks her co-host. While Kame sees nothing wrong with some simple kisses, she recognizes that Sayu is especially proactive in trying to initiate these things. On their current tour (“Pikappika!”), Sayu’s been kissing Ai-chan constantly — she’s been going so far as to making premonitions like “one day, I’m going to make Ai-chan’s lips mine.” The hosts agree, though, that the kissing is still at an acceptable level at the moment — any more than this and it might be gross.

Something has been troubling Gaki-san when they’re singing “Genki Pikappika!” on this tour. Like Sayu, Junjun is someone who is very eager to kiss other members. Gaki-san has been kissed on the cheek by her countless of times. But during one of the concerts, Junjun made a gesture towards Gaki-san, inviting her to kiss her instead. Regardless of them being in front of an audience, in the midst of performing a song, Gaki-san shrieked “no freaking way!“ 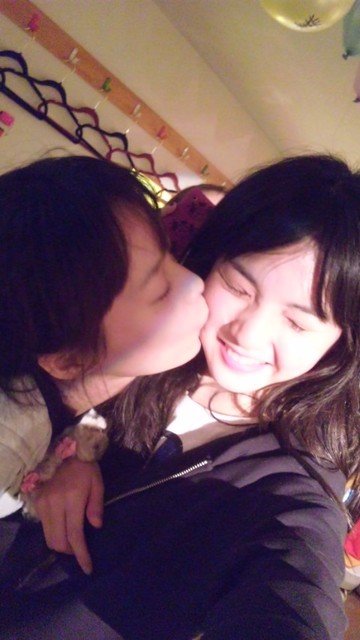 Fan mail #2: This fan mail is in regards to what the listener labels as the “Routine Guys.” The listener’s friend recently spoke to them about how, when they get home, they have default places to set their keys, wallet, cellphone and the like — if they’re placed anywhere outside of the norm, it drives them crazy. The listener wishes to know what Gaki-san and Kame think of these “Routine Guys,” and if there are any “Routine Girls” within Morning Musume.

The hosts are quick to agree: there are no “Routine Girls” within their group. Kame kind of doesn’t like the idea of “Routine Guys” — she wonders if anyone out there actually likes that type of person. Gaki-san agrees, even though she thinks it is nice to immediately know where all your things are.

Fan mail #3: This listener has a huge problem: he is never able to neatly split in half those wooden, disposable chopsticks. He is thus always forced to eat with strangely shaped chopsticks — it bothers him so much, even the food he eats with them no longer tastes good! He asks the hosts if they know of any good methods of splitting disposable chopsticks.

Gaki-san starts laughing because of how disappointed Kame sounds with the listener. “It’s like you’re saying, “man, look at this guy failing with his chopsticks yet again…”” But Kame and Gaki-san both agree: even when they don’t split their chopsticks properly, it simply doesn’t bother them. “If it bothers you so much, just carry your own chopsticks with you!,” Gaki-san suggests.

Meanwhile, Kame proposes the idea of learning some karate. Gaki-san fails to see the significance of karate knowledge when splitting one’s chopsticks. 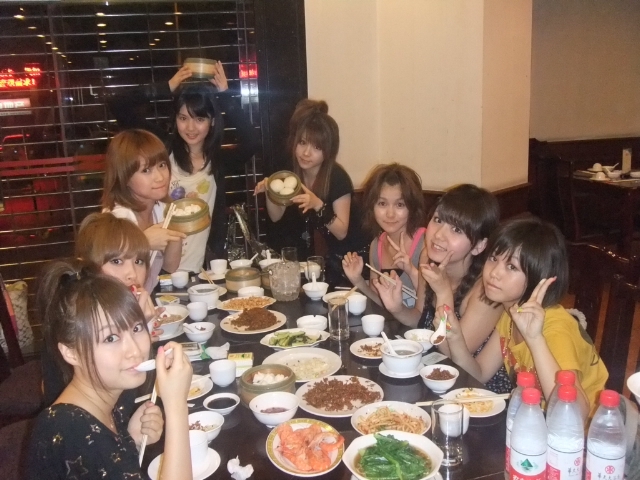 Fan mail #4: The listener recently learned from a TV show that the average household owns four frying pans. As Gaki-san and Kame’s moms are known to be good at cooking, they ask how many frying pans their families own, and which foods are their moms’ specialties.

Kame doesn’t believe they have four frying pans, whereas Gaki-san thinks they might have more than that.

Kame: Since you have that many, you should give me one.
Gaki-san: (laughs) Why the heck do I have to give you one?!
Kame: We don’t even have four. So if you have more than four… please give us one.
Gaki-san: Fine. I’ll ask my mom. (laughs)

Gaki-san thinks her mom is great: whenever they go to a restaurant and they eat something delicious, her mom will figure it out and she’ll be making the same thing only a few days later. Apparently, she’s able to perfectly recreate the taste of what they had in the restaurant. That’s something Gaki-san wishes to pick up from her mom. As for Kame’s mom, she can cook a delicious ojiya soup made with salt konbu.

Fan mail #5: “The ice cream they sell on the shinkansen is so solid, I might break my spoon trying to eat it. Considering how I want to eat it right now, it feels like it’s also going to break my heart. Kame-chan, do something!“

The hosts both know the shinkansen ice cream the listener is talking about — they often order it themselves, and it really is too solid at first. Kame-chan’s only piece of advice, if you can call it that, is: “I guess what the listener and that ice cream have between them is… 相思相愛ス soushisouaisu” — soushisouai (mutual love) + aisu (ice cream).

Gaki-san is irritated by the sudden, uncalled-for pun. 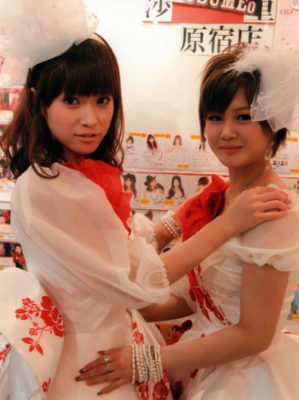 Fan mail #6: Quick question from the listener: what does Kame have strapped to her cellphone?

Kame actually has a cellphone strap she recently received from Gaki-san. It’s of the Golden Eggs series whose characters are as ugly as they are cute. Yet, Gaki-san said she bought it for Kame because she was sure she would appreciate it. “Yeah, being told that by my senpai… I’m now pretty much forced to use it,” Kame explains. Gaki-san protests. “Please stop with the senpai stuff when you’re just using it to your advantage like this.” She launches into a minor rant about this. “This person… I’ve been with this person for like seven or eight years, and usually she’s all, “hey Gaki-saaaan!” or whatever… But only on these occasions when it suits her, she starts going all “senpai this, senpai that.”“

Kame explains that, while she was happy with the present at first, she’s begun to wonder if she’s really going to have to have it attached to her phone for the rest of her life. But she doesn’t really mind: the two were just talking yesterday about how much Kame likes to have matching items with someone. “I mean, you bought that thing for me because you wanted to use the same thing together with me, right?,” Kame asks. “You bought it while thinking of me. That’s love, right? And as you know: it’s love that’s going to save the world.“

Gaki-san has noticed how Kame likes to blow up these trivial little topics into something with universal consequences. 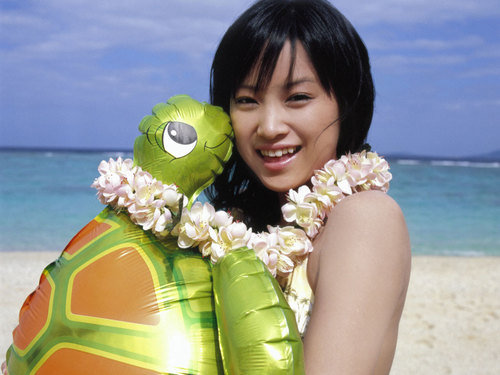 Gaki-san: We’re waiting for your messages! Go ahead and ask us anything, such as “is it true that when Kame takes a bath, she starts by washing the backs of her knees?” Anything goes!