Fan mail #1: The listener has something they say they “reeeeeeeeeeeeeally” must tell our hosts.

Kame: (as listener:) “Niigaki Risa-san… Kamei Eri-san… suki dasu. Oh, wait. I made a mistake. I mean: suki desu. Phew, feels good getting it off my chest.” Well, what do you think Gaki-san? Your answer? We were confessed to just now!
Gaki-san: Um… Does this person not kind of resemble you?
Kame: Why do you say that?

That aside, the hosts are thankful — they agree it feels good to be told you’re liked. Kame says her heart is filled with love.

Fan mail #2: “Gaki-haaaaan! Kame-haaaaan! To tell you the truth… Well… The boyfriend I was hoping to find for so long… My boyfriend… I’ve still yet to find him. But I did find a mouth ulcer. Yay.“

For a while there as Gaki-san was reading the message, the hosts almost thought the listener had managed to find a boyfriend. “But I guess life isn’t that simple,” Gaki-san suggests. The two wonder why they keep getting strange fan letters like this, until Kame remembers: “I guess we did say you’re free to send us anything…“

Kame: Analyzing this email, there’s one thing we can learn from it: this person wants a boyfriend.
Gaki-san: Mmm.
Kame: But instead, what they got was a mouth ulcer.
Gaki-san: … You just repeated exactly what the listener said.
Kame: (laughs) 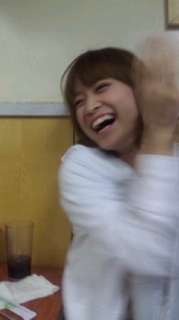 Fan mail #3: The listener is going to Disneyland with his friends soon. His friends want to ride lots of rollercoasters, but the problem is that the listener can’t handle them. He thus asks the hosts for advice.

Kame, too, hates rollercoasters. Yet, she always did her best to ride them for TV shows and such. Gaki-san remembers when they were at an amusement park with the group. Everyone was doing their best to go on rollercoasters and haunted houses and such — rides which they personally thought were scary. Everyone except Tanaka Reina, that is, who was going “I AM NOT GOING TO RIDE THAT.” The two agree: that’s something only Reina could pull off.

Gaki-san: But don’t worry. Surely you’ll have lots of fun — it’s the Land of Dreams after all!
Kame: Right! You should go to Disneyland!
Gaki-san: That’s where he said he was going! Disneyland!
Kame: Huh? But… but he said… amusement park…
Gaki-san: There you go again, not properly reading the listeners’ messages! (laughs)
Kame: … Why do you have to be so happy about me making one little mistake? Stop it. Pointing fingers at me all “there you go messing up again“…
Gaki-san: What?! (laughs) You do the exact same thing! Like, “Gaki-san, you made a mistake~!”
Kame: Well I’m sorry!

Fan mail #4: The listener has a question regarding a recent line of Morning Musume T-shirts. Kame’s shirt has the numbers “347” in the back, and the listener desperately wants to know what they mean.

Gaki-san’s shirt said “R21” — simply the “R” for “Risa” and her age at the time. Kame says her numbers actually had a very deep meaning. They’re lucky numbers she generated from, she thinks, her date of birth. She got the numbers 3 and 4, which she then summed up. 7, too, was one of her lucky numbers previously, so she just put all her lucky numbers together.

Kame: Think of it this way. Say you have cheese. Then you receive a cookie. You now have cheesecake.

This week Kame would like to award her five stars to a certain food. Namely, butter soy sauce rice.

The funny thing about butter soy sauce rice is that most people don’t actually eat it that often, and yet, “butter soy sauce” is a flavor that’s available for lots of different products, including popcorn, mushroom, spinach — pretty much anything. The way Kame likes to have hers is to take freshly cooked rice, pour some melted butter on it, and then add the soy sauce. It’s delicious, you can make it with the three ingredients alone, and it’s really cheap to make, too. 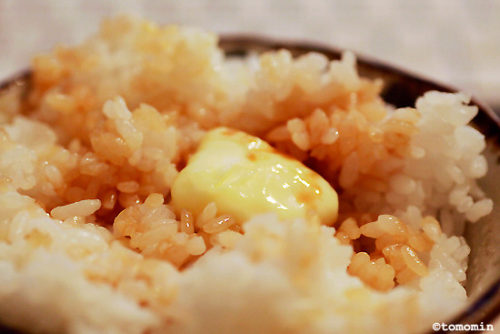 Gaki-san: We’re waiting for your messages! Go ahead and ask us anything, such as “can Kame ride a bicycle?” et cetera. Anything goes!