Message 2: For the New Year, this writer visited Tokyo to go to the Countdown Live and the Hello! Concerts. They ate a lot, slept a lot and had fun time around town. In that time, they gained 3 kg. Because of this, they have been eating better and exercising more in efforts to lose the weight. But, they love sweets, so it’s hard for the writer to not eat them. So, they wonder what Kanon is doing to prevent herself from eating something bad when she craves it while she is dieting.

The immediate response is that Kanon would like advice on this matter as well. She knows she’s on a diet but she really likes rice and other things she shouldn’t and has to substitute those things for something else. Also, sweets, like chocolate and caramel, are tough foods for Kanon as well. When she started her diet, no matter what, she would want to eat chocolate. But, she didn’t want to betray her diet, so while crying and wanting chocolate, she would look up sweets that she would like to make when her diet is over on the internet. For example, she found a chocolate brownie recipe she would like to try. In addition, she’s been looking at new places that sell sweets in Omotesando and Harajuku. Keeping them in mind, she tells herself that once she completes her diet she can try those new places. But, Kanon doesn’t think there’s anything to stop yourself from craving it. It just can’t be helped.

Message 3: Recently, Mitsui Aika has returned from New Zealand. How was meeting her after a long time? Did she try speaking to you in English? Since you said you wanted to ask her for advice, what kind of advice did you ask for?

Seeing Aika again made Kanon very happy. Her first impression was that Aika had become very pretty. Mizuki asked Aika to come visit the 9th generation during one of their performances and, by stroke of luck, Aika was able to meet with them. So they were all able to ask her what New Zealand was like and such. Speaking of the advice, Aika gave some regarding the rhythm in Onna no Otoko no Lullaby Game. She thought it would be good to ask someone who performed the song originally, and Aika showed the members how to perform the choreography cooly. She’s very thankful to have Aika around. Before, the members would ask Sayumi about choreography and how to make it better, but since she isn’t available, it’s great to have Aika there to help. 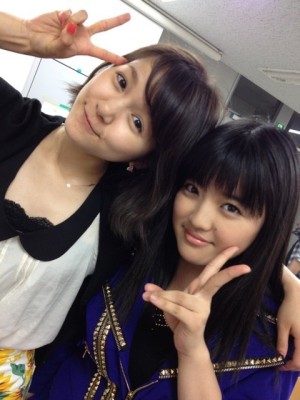 What kind of loveable characters should the 13 members take on? Kanon will debate the fans suggestions. Kanon ranks the character suggestions on a ranking 1 to 5 Morning Musume’s, 5 being the best and 1 to be the worst (or most to least likely to happen).

Character 1: With C-ute’s Okai Chisato, aims to become an idiot character in an entertainment pairing of the two, Sato Masaki.
Rank: 1 Morning Musume’s

Kanon doesn’t think this is the case. As far as being on a reality show, she is pretty certain Masaki hasn’t thought of any characters like that for herself. Its true that Masaki will say things unexpectedly, but that’s just who she is.

Maria certainly has the character that she loves Nippon Ham Fighters, although, among all of the members, it’s unlikely that they wouldn’t sing a song even if they didn’t like it. She is sure Maria is the same, even though she loves a different team than Rakuten Eagles. So, Kanon assures the sender that she will sing THE Manpower!!! no problem.

This sort of thing, is it really ok? Kanon wonders. For those thinking it is something inappropriate has been sent in, Kanon reassures them to not be worried because it’s true, Riho does love touching soft arms. Lately, it seems like Riho is interested in touching everyone. She enjoys Mizuki’s arms and other members butts, although Kanon really doesn’t understand why. Overall she thinks the whole thing is strange and isn’t totally sure how Riho feels about it although she does have the “I’m not a pervert!” thing going for herself. That’s why the ranking only got a three, because Kanon has witnessed it (and experienced it?) but isn’t sure if it’s permanent thing or if she just wants to touch Mizuki’s arms for the most part. 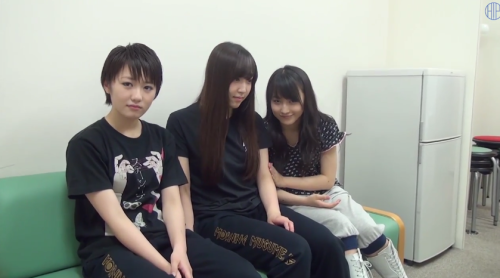 Character 4: At Hello! Concerts Nonaka Miki can also do backflips, but pressures her to not perform them by saying things like “Are you sure? Its very difficult and dangerous. Will you be okay?” so she is the only one performing them, Ikuta Erina.
Rank: 2 Morning Musume’s

Erina’s the type to work hard without the influence or help of others and doing backflips is certainly her specialty. However, rather than trying to convince Miki to not do it, Erina would be more likely to point out every time Miki wasn’t doing the backflip well enough or in-sync enough to her own backflips. Kanon ends the thought saying that Erina’s specialty will certainly be featured in the next Hello! Concert so everyone should look forward to it.

Character 5: When watching DVD’s to go over things, if she sees herself doing something well she’ll hold down the pause button, Ikuta Erina.
Rank: 4 Morning Musume’s

Its very like Erina to do this. For example, if they stay the night at a place and then view the choreography/concert DVD the next morning, Kanon will make note of where she messed up the choreography and make a correction later on. On the flipside, if Erina sees that she has done something well, she’ll want to make note of it by saying things like “Oh did you see me?” and relish in her accomplishments. It’s just he way Erina is.

Although she is on her diet, she really has an appetite for curry right now. Kanon sighs deeply, saying it can’t be helped that she can’t eat it. Kanon expands on Indian curry, saying it doesn’t taste like something Japanese people would have a major taste for, although she thinks it’s delicious. Going to India to try curry from the source would be a great thing for her, although she doesn’t think it will happen any time soon. Since Kanon highly doubts she will get to go to India for work, she supposes that when she graduates she will be able to go to India.

Character 7: Has to look for a motivation switch to, Suzuki Kanon
Rank: 3 Morning Musume’s

Kanon agrees that this is pretty much like her. Particularly when it comes to blogging. She didn’t post about going on a diet till about three days into it. After, there were many comments on her blog among the lines of “It’d be nice if you had a bit of a motivation switch,” and at handshake events she would hear “Where did your motivation switch go?” (regarding blogging and dieting). Fans were even casually commenting on it to the point where Kanon thought “Wow, there are a lot of comments on it, huh.” But, it reinforced her efforts on her diet. 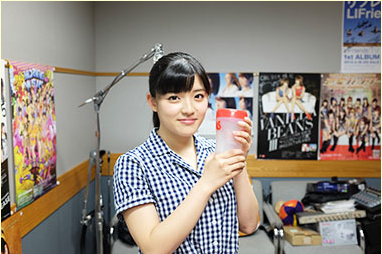 Sticking to her diet, one day at a time