The opening discussion question is, “What country do you want to visit?” Kananan’s first choice is Saipan. Rinapuu does not know what that is. Instead of explaining what that is, since she probably doesn’t really know, Kananan details her plan for Saipan, in which all of the 2nd gen members go on vacation for a week in Saipan in 10 years’ time. Rinapuu wonders how old they’ll be then; Kananan says 30, but then she realizes her math is all wrong. Then, she changes when she wants to go from 10 years to 7 to 5 to 6. Basically, a year or so after they graduate from ANGERME, she wants them all to go on a trip overseas together. Rinapuu doesn’t know about Saipan or this timeline, but she agrees with wanting everyone to go on a trip or at least getting together again once they leave the group, however long that will be. Right now, even though they’d like to travel together, they never have that long of a break, and when they do have days off they spend them with their families and they aren’t all necessarily in charge of their own finances yet, so it just makes sense from a practical and an economic perspective to wait until they’re done with the group. Whether it’s 4 members or 6 or 9, they both want to have a fun trip with the group.

She just wants to see the Saipanda, because who wouldn’t?

As for Rinapuu, she wants to go to Hawaii. She notices that a lot of entertainers choose Hawaii as their destination of choice for vacations and end-of-year activities, and she reads a lot of blogs by people who go to Hawaii this time of year since it’s so cold in Japan. She gets really jealous over this, because she hates winter and wishes she could spend the whole season or even just live in a country with a more tropical climate where winter doesn’t really exist. She also loves the ocean so some place like Hawaii or Australia would be perfect for her. Kananan disagrees because she would get worried if her mother ever got sick so she’s going to stay in Japan.

Rinapuu reads the intro for the show, as they do every week, but has nothing else to say once she’s finished with it. “It says free talk in the script,” she says, a not-so-subtle recommendation that Kananan say something. When neither of them speak, Rinapuu decides that the topic will be on anything going on in their private lives, something unrelated to work or H!P. Kananan thinks about it, then decides to talk about what she did on her recent day off. First, she just slept all morning. However, she decided that this wasn’t the best idea since she has been prone to shutting herself up inside her house for long periods of time (NEET tendencies, if you’re savvy) if she doesn’t get out enough, so she went to her friend’s house, but ended up falling asleep again. When she woke up, she couldn’t feel her feet and had to get her friend’s mother to massage the life back into them for her. Then, after hanging out for a bit, she found out that Inaba Manaka had nothing to do so she invited her out to go shopping. They bought clothes and food and cosmetics and had a whole lot of bags by the end, but she had fun carrying them back with Manaka there. She was nervous at first, since she doesn’t know Manaka that well and was worried that things would be weird, but she has always wanted to be friends with her and not just have a work relationship and everything was fine in the end. She says that Manakan feels like a sister. 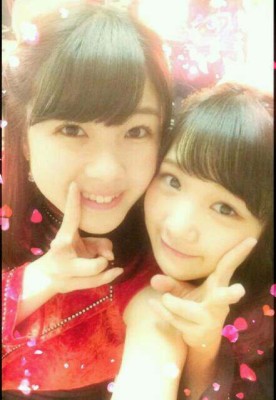 Rinapuu’s story is that she went to Hastumoude, or the first shrine visit of the new year, for the first time. She had never been and some of her friends organized to go, so she finally took the opportunity and went with them to Meiji-jingu. She wanted to do everything you’re supposed to do like pray and get your fortune for the year, but they didn’t have any there so she just wrote on a declaration board about wanting to get stronger this year. Still, she would like to get a fortune, so she hopes that she’ll be able to stop off in Kyoto or Nara on their upcoming tour and get one. Kananan reminds her that it’s not necessarily for the best, since she drew the worst luck for this year. Rinapuu points out that that doesn’t really matter, since they’re getting to play at Budokan again this year and that’s pretty good luck in any case.

Here’s a letter from Kairi. They just bought the Smile Fantasy DVD and have really enjoyed it. The play made them remember how much they love Tsunku’s music and made them realize what it miracle it is that all of the S/mileage members are here in front of them. It also reminded them to keep precious the time they have with their boyfriend, with whom they are in a long-distance relationship and can only see each other every few months. They thank the group for putting on such a wonderful play.

Kananan really likes this letter, as Kananan likes any letter that is highly complimentary. Rinapuu likes that they have fans who think so deeply about their material and she agrees on the part about Tsunku’s songs. While they do love the songs they got for their last single, there’s just something different about the ones Tsunku writes. They feel much more personal because Tsunku writes songs with a specific group and members in mind, so the lyrics resonate so much more with them when they get new material. Kananan was a big fan of the play, as well, since it was about the group and the original songs were especially meaningful, especially that one song… that she can’t quite remember the name of. Oh, ONE DAY, that’s right. She remembers watching the footage on Hello!Sta of them getting the news that 3rd gen would be joining and their name would be changing and they played ONE DAY in the background and it was so moving. It reminded her to take everything one step at a time and to appreciate everything that happens in her life. S/mileage songs are a very powerful thing, you know.

Next, some letters about the new member colors. One letter is from Nagoyan, who wants to know what their impressions were when they got their new colors, and another is from Berina Courage, who wants to know if they made any mistakes in recognizing their new colors, since the fans will need some time to get used to the changes (especially me; do you know how hard it is to remember which pink Kananan has?). They admit that they’ve had some difficulties adjusting and still aren’t sure which color to look for when performing. It’s also difficult because the colors tend to blend together. Rinapuu says she appreciates those who have lights in a lighter shade of orange because they’re easier to pick out, but deep orange looks a lot like red, and then Kananan can never tell if she’s seeing light pink or dark pink or red or even purple. An issue also arises with shirts, since they have yet to release any shirts with the updated colors and it’s odd seeing someone with a light blue shirt and a pink light. Rinapuu also notes that there might be some people who don’t even know that they switched colors, since it was only announced on their blog and not everyone necessarily reads the blog. Kananan wants us all to do our fellow fans a kindness and inform them of the change if they seem to be promoting the wrong color. Do it nicely, though.

More letters after the musical break, this one coming from MamiMami. Something they want to see is all 4 members of 2nd gen take a camping trip and fend for themselves. They want to know who they think would be the most competent in such a situation where they have to cook for themselves and take care of everything on their own. First of all, they both think that this is a great idea and would love to do it.

Rinapuu: Hmm, for cooking, I guess it would have to be Kana.
Kananan: Nah…
Rinapuu: I mean you seem to be good at it, like you post about it on your blog and stuff.
Kananan: … what? You take the time to read my blog? I’m so grateful! Thank you!

In any case, Kananan is still the oldest and she also happens to cook the most, so she would be in charge of that. Kananan would want Meimi to help her with it, since she’s the most responsible. Takechan and Rinapuu would likely be off somewhere making noise or getting in the way, so they don’t need to help with that. Kananan does admit that Rinapuu is the bravest among them, and Rinapuu she’s always the one to talk the other members down from being scared and say it will be fine. They would send her out to check on things if they heard a weird noise or something. On the contrary, Kananan and Meimi are the biggest scaredy cats of all the members.

Kananan: Once, we went to a haunted house in an amusement park, and we saw one of the actors playing a ghost and we got so scared that we asked one of the staff members to come with us. The ghosts were much better with him there.
Rinapuu: … it’s not scary, though.

So that’s that. I don’t know if Rinapuu isn’t scared of anything or if she just can’t be bothered. She seems perpetually unimpressed and I dig it. 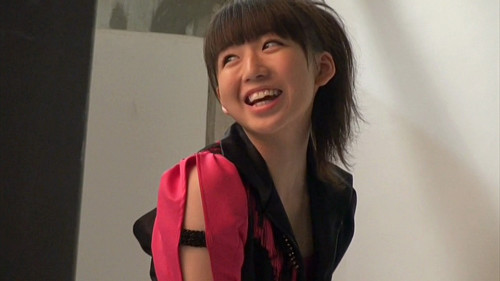