This is the time of year for newly 20-year-olds and not quite 20-year-olds to dress up in their finest kimono and wander out into the cold to get a certificate confirming that they are now adults. It’s the Coming of Age Ceremony, hooray! Unfortunately, none of 2nd gen are getting to participate, and even though 1st gen should be, they aren’t, because their managers are buttheads. In any case, Kananan and Rinapuu talk about what an adult woman is to them.

Rinapuu notes that she has this image of an adult now, but she recalls back when she was younger that anyone older than her seemed like an adult, so she thinks that even when she reaches 20 and technically becomes an adult herself, she will have a completely different idea of what it means to be grown up. Still, for right now, the primary characteristic she sees in an adult woman is her composure. Kananan is clearly already an adult woman so she doesn’t have any impressions as to what one would be.

It’s the first show to be recorded in the new year, and so they go over what they did to bring in 2015. Rinapuu wrote about her big event in her blog, but she went to see the Kpop group Supernova in concert. She’s been a huge fan of theirs for a long time and really, really wanted to go see their end-of-the-year concert. However, the end of the year is a notoriously busy time for the H!P members, between the Countdown live and rehearsals for Hello!Con and everything in-between, but the concert just so happened to occur on the one day this month that she has off. She got to buy a penlight and a t-shirt and had a great time. 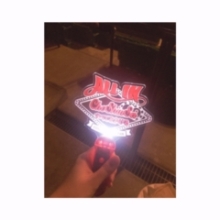 Why are Rinapuu’s blog pictures so tiny?

As for Kananan, she spent her day off back home in Kansai, since they were prepping for the Countdown in Kobe and Osaka. This meant a lot to her since most of the time she’s in Tokyo, even on her days off, and she could go do New Year’s festivities with her friends from back home. She actually slept through the change between 2014 and 2015, which shocked her, but once she woke up she went to go hang out with her friends. They went to Nara together to do the first shrine visit of the year, they played with the deer, and they got to write down their wishes together. Kananan notes that this year is supposed to be an unlucky one for her, so while she didn’t get a chance to go see a Buddhist monk to perform a ritual to ease some of her future misfortune, she feels she got off to a good start. She’ll just need to be extra careful in February.

The Worst Raffle Ever

Since it’s Power-Up Week for the radio station, they do a raffle to give away the 4 kanji boards that they wrote earlier. They first draw a letter from a Kananan fan, whose kind words about how she’s their ultimate favorite almost bring Kananan to tears. Unfortunately, they get the Rinapuu board. Sorry ’bout it.

The next winner wants Takechan’s board, and they get Kananan’s board. Good for you. They write a fairly long note about how they like the new group name that Kananan picked out, but they’re also worried that all of the great things about S/mileage will get left behind. Kananan says she understands this concern and reveals that out of the approximately 10,000 name suggestions they received, an awful lot of them were related to Smile or were just S/mileage. It made all of them happy to know that this name was so cherished by all of the fans, but they really wanted to go in a different direction. They’re aren’t throwing away their history, either; they are who they are today because of all the experiences they’ve had with S/mileage, but they want to keep what they did as S/mileage the way it was. They’re changing the name because they want to change the group and she hopes everyone understands that. 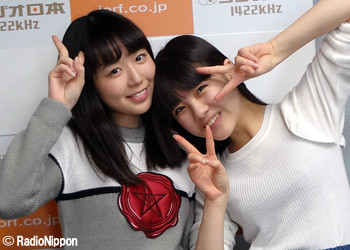 It’s difficult to be mad when they’re so cute

This letter comes from Shibanami. First, they want to make sure that neither of them have caught colds. They haven’t. Next, a question for Rinapuu: since she seems to be getting along so well with all of the new members, are there any that she wants to make a part of Bakuwara Friends? To make it easier to choose, she breaks it down by group.

There are two she likes in Country Girls, Shimamura Uta and Morito Chisaki. She likes Uta because she’s mysterious. Obviously, she’s super cute, but the way she acts makes it seem like she always has a secret or something and it’s intriguing. Chisaki, on the other hand, is just so easygoing and that’s also really appealing to Rinapuu.

From 12th gen, she has an interest in Makino Maria. They’ve spoken together about how much they like Michishige Sayumi so they already have some common interests, but she’s definitely attracted to her for how responsible she is and how hard she works. Kananan says she makes her tired just watching her, and Rinapuu says that she always seems like she’s thinking about something. Rinapuu is pretty good friends with most of the members in Morning Musume and even then Maria stands out for being way more mature than even the older members. 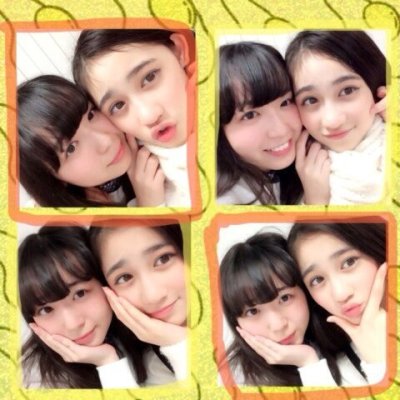 Too much energy, not enough energy… Didn’t see this one coming.

3rd gen is easy, it’s Rikako. All of the 3rd gen members are really cute, but it feels weird to Rinapuu to say that about Maho and Muro since they’re the same age as she is. It makes her seem like she’s above them somehow and she doesn’t mean it like that, but it’s easy to say it about Rikako because she’s so much younger. She wants to make her her younger sister, plain and simple, Bakuwara Friend. Kananan’s personal favorite of 3rd gen is Maho. She especially thought she was cute yesterday when they had work together.

Kananan: She also is really into fragrances
Rinapuu: Wait, what? She’s into freaks?!
Kananan: Fragrances! Like perfume and body mist!
Rinapuu: Oh, good, I was about to say, what does that say about you and her?

They don’t forget Murotan, either. “She smells really good,” Rinapuu informs us. When they were recording a TV show the other day, she talked about what a crybaby she was and Kananan thought she was super cute. Then she starts squealing, which freaks Rinapuu out and leads to the conclusion of this discussion.

Rinapuu: Are you okay?
Kananan: What?
Rinapuu: Aren’t you going to be 18 this year? That’s kind of gross (laughs).
Kananan: No, no, no! I just really like AiAi and Murotan! They’re cute!
Rinapuu: What about Rikako?
Kananan: She’s cute too! Obviously! She doesn’t need me to tell her that, everyone can see that just by looking at her.
Rinapuu: She is. She’s adorable.
Kananan: Okay, but Aiai just has this aura and her figure is great and her face is small and it’s great when she smiles, and then I like Murotan too… yeah, I like Murotan. Thank you for your messages. I really do love them all the same.
Rinapuu: Uh huh. Sure. 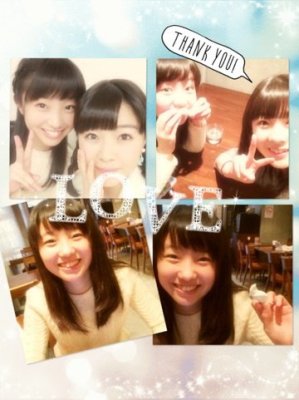