So, two holidays, six family trips, and one repaired computer later, I’m back from the dead and ready to hop right back in to what is still, for the time being, S/mileage Station 1422. The group has at the point in time of this show already changed their name to ANGERME, and the show name will later change to AS1422 accordingly, but I will probably refer to the group as Ange should it ever need to be said, lest I cause myself and others undue feelings of fury and rage. I will attempt to only refer to the group as S/mileage whenever the members do, which they seem to do when they are referring to events in the past that happened prior to the name change. Anyway, on with the show. 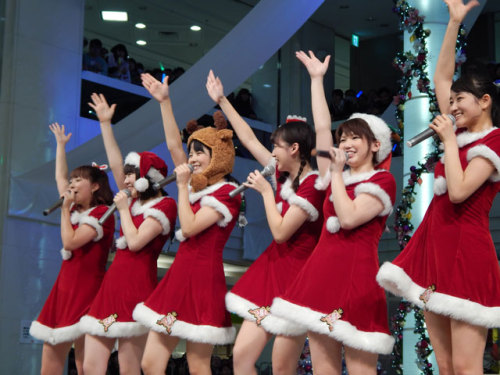 Since it’s so close to Christmas, Rinapuu opens the show by asking Kananan what she wants for Christmas. After several moments of contemplating and drawing out her answer, Kananan says that she wants some books or some DVDs or something. Rinapuu thinks that that is lame and tells Kananan as such, but she really wants some clothes, not that she needs any more, she just wants them. And maybe a DVD or two (Kananan: “Hey!”). They’ll be waiting for your presents to them. Or, Santa’s presents to them. Whichever comes first.

However, the impending holiday signals another important milestone: the end of the seemingly never-ending Smile Charge Tour. While Smile Charge has been a collective of a few different tours, they performed an incredible amount of shows in every single prefecture in Japan over the course of the year and it feels almost surreal to them that it might actually be over. It has been fun, though, getting to go to every single prefecture in Japan and occasionally getting the opportunity to sightsee and experience differences in the various regions of Japan. Kananan points out that she is indeed Japanese (to which Rinapuu replies, “Oh, really?”), but she didn’t realize how little she had seen of Japan until this tour, so even though it was very long and tiring to go around the country like this, she is grateful for the opportunity.

For those who have not yet gotten the memo, S/mileage is S/mileage no longer: they are ANGERME. Before you start screaming at your screen like so many of us already have, either because we hate the name or because the name seems to be directing us to do so, it is not pronounced in the English way, as in “Anger me!” but in a pseudo-French Japanese way of “Anjurumu.” It is a bizarre portmanteu of the French words for angel, “ange,” and tear, “larme.” See? It totally makes sense now. In any case, they received tons of submissions for the new names and they had many heavy discussions on their favorites and whatnot, but ultimately they went with Kananan’s suggestion, which was ANGERME. Rinapuu points out that there will likely be many times in the future when people still refer to them as S/mileage or when they might make a mistake and call themselves S/mileage, but let’s all try to remember their new name instead. Please?

Equipped with a new name and new members, it’s time for a new single. While Kananan attempts to distract everyone by shouting, “Yeah, Meccha Holiday!” Rinapuu divulges the titles of the two songs: Taiki Bansei and Otome no Gyakushuu. Rinapuu describes the former as a rather straightforward song and the latter as a mysterious kind of song. Kananan believes that Taiki Bansei (“late bloomer”) is about her. Rinapuu isn’t convinced. These are, however, the first songs to include the 3 new members, which is a big change for everyone. Both of the hosts say that they’re often taken aback during photoshoots and such because it seems like so many people. Kananan remarks on the difficulties in performing all of their older material, which had been designed for or adjusted for 6 people. Their dance instructor told them that they would just continue to do the moves as they normally would in these songs, only the formations would change slightly to accommodate 3 more people on stage. This has posed some problems as they now have to be extra conscious of what they’re doing; otherwise, they’ll bump into someone or start doing formations from when they were 6 members. They hope they’ll be able to give everyone a performance where no one bumps into each other someday soon. 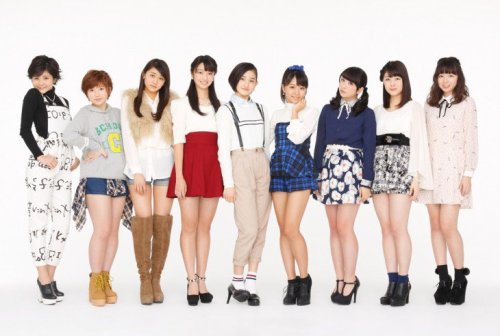 Now with 9! Also Rikako that is how you break an ankle, stop it right now.

So… Rinapuu admits that they haven’t read fan letters in a while, so there are a lot of them all piled up in the radio station. She doesn’t seem happy about it. The first letter comes from Big Daddy R (no, seriously), who addresses his letter to 3 of the 4 2nd gen members and Nishinaka-san, whoever that is. This is a very strange letter, which goes into detail about every single thing S/mileage did this past year (Rinapuu: “Oh, he noticed.”) and congratulates them on their 100th broadcast even though he sent it well before the 100th broadcast. He also asks how they felt about this year and says that he felt it was dramatic. Both Rinapuu and Kananan are slightly frightened as Big Daddy R sounds kind of agitated in his letter. They thank him for his time and move on. 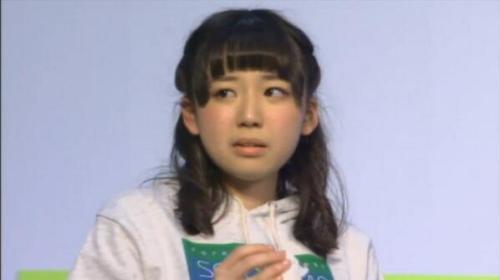 The next letter is from Bobobo Bravo, who comments on their show in Okinawa. It was their first time in Okinawa for any reason, and they found it to be a genuine delight. Between seeing all of the Okinawa local wota who normally never get to see S/mileage and the familiar wota from the Tokyo area who looked so happy to be in Okinawa for a show, they were really glad they decided to come. The show was great, and they hope the group will get another chance to perform there.

Another letter comes from It all falls from here. They congratulate the girls on going to all 47 prefectures in Japan this year, most of which they attended. They had so much fun following them around the country and were always moved to hear what they had to say about going to each different location. They hope that they will be able to do another tour next week? Next year. Rinapuu can’t read.

They weren’t lying when they said they had a lot. The next letter is from Kouyama’s older brother, who introduces himself as their older sister? Rinapuu is confused, Kananan is tickled. They have a question for them: If they had to choose to either never ever be sleepy for the rest of their lives or to never ever be hungry for the rest of their life, which would it be? Kananan needs a minute to figure out the exact implications of this decision, but ultimately decides to never be hungry, whereas Rinapuu decides to never be sleepy. They both accuse each other of making the wrong decision and are forced to defend themselves. Rinapuu says that she likes eating much more than she likes sleeping and feels that if she never had to sleep she would have much more time to go shopping, so that’s the better choice. Kananan disagrees and says that without sleep her face would get all gaunt and dark and her health would diminish from lack of sleep. Rinapuu asks if the same wouldn’t happen from not eating, but Kananan asserts that while it is nigh impossible to sleep if you’re not sleepy, it is possible to eat if you’re not hungry. Therefore, it’s better not to be hungry than to not be sleepy. Again, Rinapuu is not convinced. She is never convinced.

Once again, they remind everyone that their group name is now ANGERME. As if we could forget. 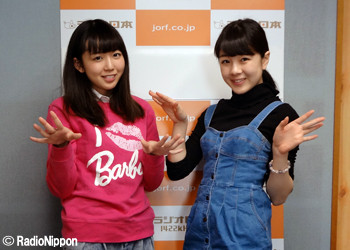