As for specific “episodes” about their Senpai, Ogata starts them off.

Ogata: So Ogata and Nonaka both really like Sayashi-san. Just a bit ago, Ogata was checking Sayashi’s blog and saw a 2-shot of Nonaka and Sayashi which made her really want one. Taking a 2-shot with your beloved Senpai is a dream all the girls share and Ogata has decided that she will work hard to get one with Sayashi-san. But it’s important that the request comes from Sayashi, Ogata cannot ask her or she feels like she’s failed. 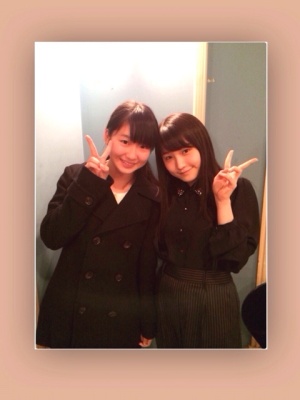 Maria: Maria has a a ton of trouble with her bangs. Pretty much they never do what she wants them to do. She wants to curl them, but they go all weird when she tries to do it. (Akane puts in she herself can’t curl at all). Maria will fight with them for around 20 minutes. Now Ishida-san has great bangs. Everyone agrees. When she’s dancing they just look perfect. So one time Ishida-san fixed up Maria’s bangs and they looked really good. She was going to take a photo of it, but then she got freaked out that maybe there was a ghost behind her and decided not to take it. The rest of the 12th Generation freak out accordingly.

They all want help with their bangs though, as they all have trouble. They want Ishida-san to teach them her secret. They especially have issues with their bangs parting in the middle. Ogata then compares Akane-chin’s hair to Ultraman with the way certain parts tend to stick up. Akane is apparently almost always having trouble with that, except today. Today her hair sat perfectly flat on her head. Everyone congratulates her.

Akane: Akane mentions that when they are all practicing at lessons with Oda-san, she is always helping them out and is incredibly nice. So one time Akane lost her train card and decided that she might as well just buy a new one. But since she wasn’t entirely sure how since this was a different train card than she used to have, Oda-san helped her out. Akane was really happy that Oda was nice enough to help. But Oda seemed like she was also really happy that she was getting to help Akane, because she was smiling a lot the entire time and was really adorable.

Ogata then mentions that Akane has way to many Senpai that she adores, so she’s not actually entirely sure who her favourites are. Akane tries to argue and then ends up not being able to say anything in her defense. She says that she really does like Oda-san a lot, but the other girls add that whenever she looks at a photo of Kudou-san she gets really smiley, and then on top of that she’s always talking about how much she loves Takagi-san. Akane interupts and says that Kudou and Takagi are her top but she’s actually not very picky when it comes to Senpai she loves.

Nonaka: Nonaka says that Suzuki-san (Kanon) is always really nice to her. She’s always helping out Nonaka with lessons. Yesterday Suzuki-san gave her a cookie, in which everyone got jealous over because they didn’t get any cookies. Nonoka was incredibly happy about getting the cookie, especially since Nonoka can’t cook at all. She then mentions that Haruna-chan (Ogata) is really good at cooking. Ogata acts really proud of it when suddenly Akane opens her mouth and goes… 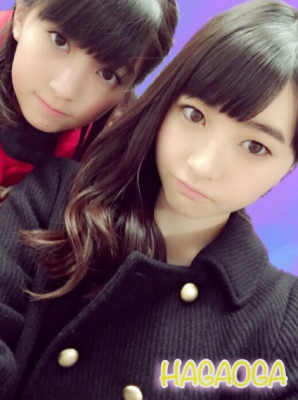 Maria interjects that she can make one thing, she can make Ohagi. Ogata then decides that they should have a Takoyaki party. Maria says that she can totally do Takoyaki, but Ogata argues that it wouldn’t be the same as Osakan Takoyaki. Maria apparently doesn’t like octopus, Akane chimes in that she doesn’t as well, but Ogata says that they can put cheese in it. It’s then added that mayonnaise might be a cheaper alternative as well. They talk about food some more and Ogata or Nonaka mentions that they put cheese on her udon the other day. She doesn’t know why, but she just suddenly felt like she wanted to try it. She defends herself by saying people put cheese on pasta all the time. Maria likes cheese a lot and likes to put a lot of cheese and salt on her fries.

Nonaka: That’s really bad for you.
Maria: Ah, Nonaka-chan, don’t talk like that.

Question #2
Tell us something that you really want to do.

Maria: Maria and her mom have had this huge dream for a long time. So of course Maria really loves baseball. When she was in Kindergarten, she drew this picture and got to meet her beloved Shinjo at the Sapporo Dome. What she really wants to do is go to Texas in America.

Akane: In Nagano, she wants them to eat at a certain place (a cafeteria?). Maybe they could play “Russian Roulette” with wasabi. Maria is incredibly against this idea and suggests mayonnaise instead or maybe a lot of salt.

Ogata: Ogata wants to go figure skating with everyone, though she’s not sure if anyone else can or not. Maria interrupts and says she’s done it before and she didn’t slip. Nonaka mentions she really hasn’t and the girls ask if people in America skate at all. Nonaka insists that they do, she just never really wanted to and she was in Alabama so there wasn’t much chance.

We then pause as everyone else repeats Miki saying Alabama-shuu


It’s decided that Maria is probably the only other one who knows how to skate. It’s wondered then if it’s because she did ballet.

Nonaka: Nonaka wants to do a quiz where they have to answer things about the other members in 12th Gen. Ogata suggests this actually might be quite hard, for example even though she gave Nonaka a birthday present, she actually can’t remember when her birthday was. Maria insists that she roughly knows when it is… but only roughly. When she says it though, her month is off.

It’s then decided that they should have “batsu” games as well for the quiz and a prize. Akane jokes that of course the batsu game will have to be wasabi. Maria of course is not amused.

Nonaka finishes off by saying that time is about up and she had a ton of fun being in charge today. She really wants to do it again.

Next after doing promo for both the Winter H!P concerts and their blogs, Maria announce that she will be the leader next week! So tune in.

((forgetmenots: Hello! I am going to be translating 12Ki Nikki from now on. This show has helped me really get to know the 12Ki so hopefully translating it can help everyone else as well. Thank you for reading!))