Momoko announces that this is the last episode of Trattoria Buono! for the year. Looking back over the year, a lot of things happened on the radio show. They feel that  the appearance of Baron-san on the radio show was the biggest thing that happened. Getting to interact with him was something they hadn’t expected. They praise his dulcet tones, and Airi wishes that he’d pop by again.

Momoko also remarks that Airi-sensei hasn’t been appearing recently. A bit of explaining may be in order. As you may know, one segment of the Trattoria Buono! shows is an advice corner. In the past, Airi would disappear somewhere, while Momoko and Miyabi would mull over the given question for a while. They would then summon Airi-sensei, a ‘character’ played by Airi. According to Miyabi, Airi wears black spectacles when in the Airi-sensei role. Airi-sensei would give her frank opinions on the problem at hand, in a somewhat airy-fairy manner. In mid-2014, both Airi-sensei and Airi ‘met’ one another in the advice corner, and from then, Airi-sensei slowly stopped making appearances.

Coming back to the radio show, Momoko recalls that up to the first half of the year, Airi-sensei would often pop by and given her frank opinions on the various situations they received from listeners. Airi suggests that they should try contacting Airi-sensei, and asks if the others remember when both her and Airi-sensei appeared at the same time. Airi herself personally enjoyed that encounter. Her schedule and Airi-sensei’s hardly ever match, so Airi enjoys the occasional chance they get to meet. Miyabi and Airi start going back and forth about contacting Airi-sensei, until Momoko tells them to stop with the farce, and commences with wrapping up the opening segment. 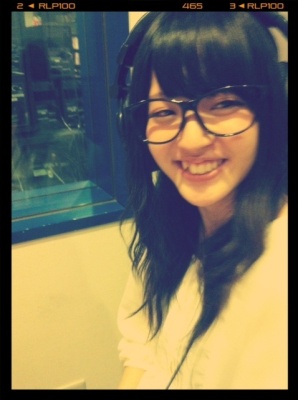 Discussion topic: The moment I shined the most in 2014

To Airi, the word ‘shining’ makes her think of Super Stars in the Mario series of games, and she even gives us the musical accompaniment.

Airi enjoys being in that invincible mode, though Momoko finds that it lasts for too short a while in Mario Kart.

Coming back to the main topic, they can’t really come up with anything in particular that left an impression in that year.

Miyabi: Well number one, speaking like an idol, would be concerts, I guess.
Momoko: Like an idol, huh?
Airi: Like an idol~
Momoko: That’s great, like an idol! Give us more, give us more!
Miyabi: Definitely, when we’re performing live, since our beloved fans are watching, we kind of shine even more…
Miyabi: Well, I always think that the girl is let out.
Airi: Ah, words of wisdom have appeared: ‘The girl is let out‘. So what do you mean, ‘the girl is let out‘?
Miyabi: For example, naturally walking pigeon-toed.
Momoko: Or giving winks, right?
Airi: Ah, giving winks. Releasing of beams as well?
Miyabi: Ah, the beams have recently…
Momoko: Reduced?
Airi: A reduction in their release?
Miyabi: That’s how it is.

Momoko wishes that she could somehow show Miyabi’s face at that moment to all the listeners. Airi thinks that they’ll probably be able to catch it from Miyabi’s tone of voice. They both agree that she’d said something good. (Airi: ‘You were an idol‘). All in all, Momoko agrees with Miyabi – she thinks that concerts let them shine more than anywhere else.

Momoko: Singing my favourite songs in front of my beloved fans… There’s no greater joy than that!

Talking about Buono!’s concert activities, Momoko brings up the fact that this year, Buono! performed at the Nippon Budokan during the September 10th and 11th Thank You BeriKyuu Budokan concerts. The girls unanimously agree that it definitely was a shining moment for Buono!, that it was Buono!’s peak for the year. Momoko then takes the opportunity to remind everyone that the DVDs of the event have just been released, and the three of them start making impromptu promotions for the DVDs before Momoko wraps the segment up. 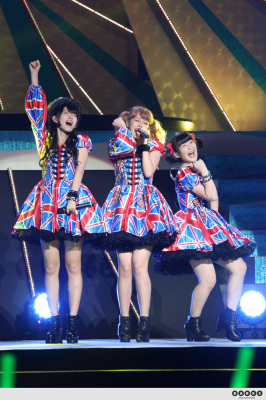 Today’s note comes from a 23-year old male listener. This listener has never written New Year’s cards for anyone beyond his friends, but thinks that this year, he should send New Year’s cards to the people he has work dealings with. But considering it again, it would be difficult to send cards to all his acquaintances. He could take the easy way out and finish everything by sending his greetings through e-mail, but as a working adult, he feels that it would be unacceptable. Perhaps writing it by hand would be better?

Momoko: There it is – a New Year’s card problem.

Repeating the statement ‘…as a working adult, it would be unacceptable…‘, the girls feel that it depends more on the circumstances surrounding him. Airi thinks that it might have been a problem a long time ago, but it’s become more acceptable. As Momoko points out, it might even improve goodwill between people.

Coming back to figuring out which approach to take, Momoko notes that receiving postcards in the mail does give one’s spirits a lift. The girls agree that, if possible, writing by hand would better convey the message. On the other hand, Miyabi comments that it’s not like an e-mailed greeting would be unwelcome.

Momoko suggests e-mailing a photo of a New Year’s card. This suggestion immediately gets shot down by the other two, who feel that doing that would be impolite. Just an e-mail would be sufficient.

Momoko: How about sending photos via LINE?
Miyabi: Rejected.
Airi: It seems like a bad idea, just thinking about it.

Airi comments that you can add decorations to e-mails, although it might be unappealing if the decorations get too ‘lovely’. Momoko thinks that it wouldn’t work for this male listener though, due to his gender. Airi explains that it shouldn’t be flashy, perhaps more a template for a New Year’s greeting. Miyabi remembers using those a long time ago, in an age where flip phones were still the rage.

Summing up, Momoko says that sending e-mails would be completely fine, but if he has the time, he could try writing out his greetings. 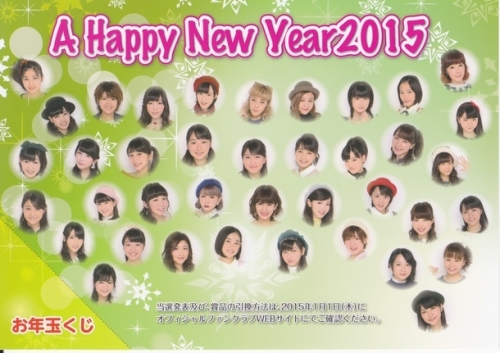 {From the translator: Due to changes in my professional life, I regretfully will no longer be writing up summaries for Trattoria Buono! for the time being. If you’ve been following along with these summaries, I’d like to thank you for reading so far. Trattoria Buono! isn’t your typical idol radio show (Seriously, idols as agony aunts? Girls contractually obligated not to have romantic relationships giving advice about love to people sometimes older than them?), but then again, Buono! isn’t your typical Hello! Project group either.

I’d also like to thank Henkka for allowing me the opportunity to contribute to this site, as well as his stellar efforts at maintaining not just one, but two translation sites.

Would also like to thank the girls of Buono!, just for being awesome. And Pizza-La, for their continuous support of Buono!, including sponsoring the show.

Also, if you’ve been studying Japanese for a while, and have been looking for a New Year’s Resolution that isn’t ‘lose weight/exercise more’, why not give translating a try? It’ll probably feel like a Herculean task at first, but you’ll end up learning a lot by the time you’ve done a few, plus there’s the huge rush you get from actually finishing a translation. I highly recommend it if you feel like you’ve hit a point in your Japanese studies where you feel like you’re no longer making much progress. There’s a wealth of material out there – blog posts, radio shows, Twitter posts, magazine interviews/articles, lyrics, 2ch threads for the fandom aspect… why not give it a try?

I’m starting to ramble, so it’s time for me to sign off with a Kia Ora Gracias Arigato and a Happy New Year!