There is a very brief introduction to the show by Meimi and we immediately go right into a song because we have things to do today! Out of all the requests that the 2nd gen members have been supplying to the radio station staff, one of them got her wish! But first, music.

Tamura Theater: The Lion King Special
Gekidan Tamura, in which Tamura Meimi acts out scripts sent in by the listeners and covers her favorite theater topics

Meimi starts us out with some facts about The Lion King, the musical. I’m sure most of you could guess that it is based on the 1994 Disney film of the same name, but the musical has been in production since 1997, it is the fourth-longest running Broadway show in history and still running, and it is the highest grossing Broadway production of all time. The Japanese adaption has been running since 1998 by Gekidanshiki, Meimi’s beloved theater company. Meimi first saw the musical on a field trip and was impressed by how packed it was even having run so long, and, as a special treat, Meimi got to sit down and talk with the current actor in the role of Simba, Minami Akito! Woo! If The Lion King inside a radio broadcast booth with a Japanese pop idol sounds familiar, there’s a reason.

Anyway, cut to Meimi and Mr. Minami. Meimi takes a minute to fangirl and thank the staff and the actor and Gekidanshiki for letting her sit down and speak with him. She reveals that she has seen The Lion King musical at least 4 times and has seen over 20 different Gekidanshiki productions, to which Minami responds with: “Wow.” 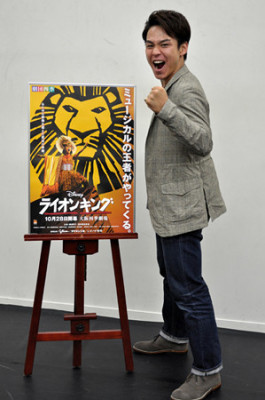 First question for Minami (there is plenty of Meimi fangirling in the background): when did you first get started in Gekidanshiki? He was first exposed to Gekidanshiki and The Lion King when he was in middle school, but he really got his start in theater later on when he went to a performing arts school. He wanted to be a singer, and one day his voice trainer asked him if he had any interest in the theater since his voice seemed rather suited for it. He started taking classes in theater and acting and had a whole lot of fun, and when it came time to decide what to do with his career, he remembered The Lion King and sought to audition for it.

Meimi: So it was a dream come true for you, right?
Minami: It was, yes.
Meimi: My dreams are coming true right now.

After being substantially creeped out by an over-eager Meimi, Minami gets another question: what is the most appealing part of The Lion King? He believes that it is the opening number, The Circle of Life, which Meimi is obviously very familiar with. Minami enjoys this song from as it brings a philosophical element of “the world will keep turning without you, so you need to live your life while you have your moment” to the stage and is presented in a beautiful way on stage. Meimi thinks so, too. Minami does not really know what to make of her; I’m guessing somewhere between flattered and very, very frightened.

Third question: what has been something important for you to do as a cast member of The Lion King? Turns out, it’s muscle training. “Of course!” Meimi says, like she knows. The costumes for The Lion King, particularly the head masks that several of the characters wear, are quite heavy, and Minami has to make sure that his body can handle the weight on a regular basis so he works out on a daily basis. 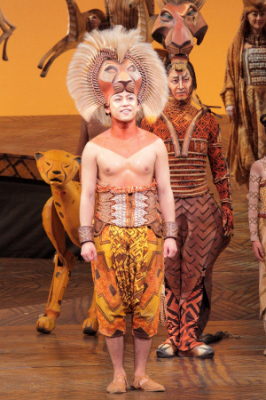 Yes, the masks are heavy, but nice pecs are also pretty important for this role

Next question: what is the scariest memory you have from the production? There was a period of time when he lost his voice due to a node on his vocal cords, and it was particularly frightening to not be able to perform for an uncertain amount of time. Meimi sympathizes: “Minami-san, you’ve had such a difficult past!” He’s fine now, though.

Now it’s Meimi’s turn to do the talking, because she desperately needs to convey to Minami how much she loves everything that he and the theater do. Meimi was first exposed to Gekidanshiki through DVDs her family had at her house, likely ones that her parents bought for her sister, although Meimi was too young to really know. She mostly watched the musicals meant for children, like The Emperor’s New Clothes, in which, coincidentally (or is it?) Minami was cast. She would watch it with her sister, who loved Minami’s female counterpart in the play, Satin, and when they would re-enact the play at home, Meimi would take Minami’s part. Minami asks her if she remembers any of his lines or the songs he sang, and Meimi just about faints.

Minami: Shall we sing together?
Meimi: I’m quitting.

So no singing because Meimi starts freaking out, but there is one thing she is exceptionally curious about: what time do you wake up and what time do you go to sleep, as a member of Gekidanshiki? Minami says that it’s about the same as a student in terms of waking up, around 7 or earlier, and he goes to bed early-ish, around 11. Meimi admits to not getting much sleep lately, so tonight she will follow in his lead and go to bed at 10, and Minami is shocked at how early that is. Many Japanese people have really, really strange sleep schedules where they don’t go to bed until after midnight and then wake up at like 6 and take naps throughout the day to compensate for the sleep deficit they inflict on themselves at night, so keep that in mind whenever you’re in Japan and see that everyone on the train is asleep except you or hear an idol complaining about being tired. So yes, 10 would be abnormally early for the average Japanese individual and perhaps especially so for a Japanese entertainer. 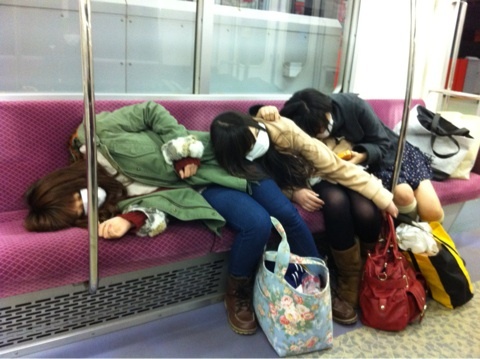 People on the trains in Japan will fall asleep on you and they will not be good-looking, fair warning

Another question Meimi has an astute interest in: what is it like riding on the Pride Rock prop? Is it scary? At first it made Minami nervous, yes, but as he did more and more shows he quickly got used to it, since he learned exactly when it was going to move and to where and was no longer surprised by the relatively sudden stops and starts.

Here’s a question that should have logically come earlier: what did you do when you lost your voice? In such a long-running show, there must be times when you catch a cold or get tired, what do you do to keep your throat healthy? He most uses throat sprays and gargling on a daily basis to try and keep his throat clear, but he also uses a couple of food-based methods when his throat isn’t feeling so hot, mostly Korean chicken soup, orange juice, and steak. Meimi says that before during a musical she was in, her throat started hurting and she had heard that steak might help, so she ate some and her throat was miraculously cured. The only down-side was that her face also swelled up from it. Does Minami have any advice for that? “Um. just exercise I guess.”

Last question: what is something you make sure to do before every show? He always makes sure to do vocal warm-ups and stretches, and then the entire cast will group together beforehand to run vocal scales and make sure they’re all ready to go. Meimi is thoroughly enamored, and that’s where the interview ends. 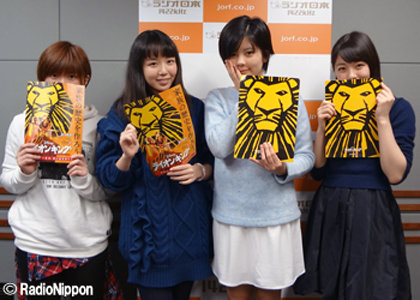 Back in the studio, everyone mocks Meimi by repeating Minami’s “Wow” and Meimi informs us that the two of them did actually get a chance to sing together after they stopped recording. She was hesitant to do it for the radio partly because she was so nervous (“We could tell,” says everyone) and partly because the song he offered to sing with her is a romance-type song and she didn’t want to give the listeners the wrong impression. She still got to do it, though, so she’s very happy. Meimi wants to know if the other members have any questions about the play or the interview or anything. Rinapuu asks if he’s a foreigner because he said “wow.” He is not.

Meimi asks if everyone knows what Pride Rock is, and they don’t. Fans of the film might recall that the home of the lions and the central rock formation is called Pride Rock (because a group of lions is called a pride), and in the musical, it’s a rather large prop that moves and spins about while the actors are on top of it.

Kananan: That sounds scary!
Meimi: Well that’s why I asked him if it was scary.
Takechan: And he said it was fine. I listened.

They then make fun of Meimi and how strange she sounded while talking to him, since she sounded like a total creep. Meimi says that she wasn’t focused on trying to keep it cool or be friendly with Minami, because she respects him so much and has only ever seen him from the perspective of an audience member so she was acting much more like a fan than a friend or a colleague. In any case, she is happy that this dream of hers finally came true and she got to sit down and speak with someone she respects so much.

Kananan asks if anything about the musical has changed at all, since it has been running for so long. Meimi says she can’t think of any substantial differences, although sometimes there are slight variances from show to show, like the portrayal of the background animals like the cheetah and the giraffe. Takechan says that S/mileage could never play those parts because they wouldn’t be able to stop from laughing while pretending to be the animals. Meimi really urges everyone to go see it because all of this will make more sense once they see the play. Takechan says she kind of understands because she has seen the movie, but Meimi isn’t so sure.

Rinapuu and Kananan open up the playbills that they have been given and look through at the pictures, and Rinapuu asks if the pictures are the real presentations of the characters. Meimi informs that yes, it is, and all of the lions in the play wear masks on their head to represent the animalistic qualities of their characters and the costumes haven’t changed much, if at all, over all the years the play has been running. She points at Simba/Minami to demonstrate this when Kananan exclaims, “What, wait, he’s Simba? Oh my goodness!” which irritates Meimi. Meimi closes with a promo for the show and lets everyone know that they’re also doing regional performances and variations on the show in Osaka and Nagoya and such, in which they slightly change some lyrics to fit the regional dialect, which is fun. Everyone go see it right now.

So that’s it for this very special episode of SS1422. Having seen The Lion King musical myself also, I definitely recommend seeing it at least once, but I’m not going to hyperventilate for the whole show like Meimi did. 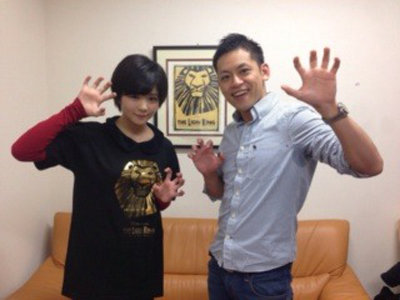 It’s okay, Meimi, I still like you even though you frightened a grown man with your love of theater.