Kanon starts the show off saying since it’s the first episode airing, she’s pretty nervous and isn’t sure how to handle it, honestly. She says has been talking by herself recently like at concerts but considers herself to be really bad at it. She talks about how she thinks it’s difficult to memorize what she has to say and then repeat it on stage and how even answering questions and summarizing talks are difficult and she’s incredibly nervous at those times. However, because she thinks she is really bad at talking by herself, she says will work at it. She says she wants to continue forward and become good at talking by herself, especially for the radio show. She then asks to listen closely for her improvements.

After that introduction, Kanon mentions that the radio program before this was Sayumi’s “Konya mo Usachan Peace” and how Sayumi was the personality of the radio show for 8 years. Now the baton has been passed to Kanon, but she says that 8 years was really an amazingly long time and wonders if it is really alright that she is continuing the show. She says that she is from Aichi, and she wants people to hear about her love and thoughts towards her hometown. She also mentions how she wants to look like someone who can handle things properly, mentioning that the show/she will have a “I’ll do my best!” theme. She wants to show herself in a true light. She mentions that there’s time for her show to become like “Konya mo Usachan Peace” and wants to work as hard as Sayumi had during her show.

She again mentions that she isn’t entirely comfortable but thinks she will be alright by borrowing the listeners’ power. She finishes her introduction with “Everyone crack a smile, Kanon Smile!” 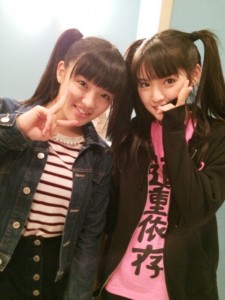 She says she is happy to play Maji desu ka Ska!? as it was her and the rest of the 9th generation members’ first single and she has many precious memories attached to it.

This listener asks how Kanon feels about the new leader and sub-leaders being chosen. They also ask how she felt about Yokohama Arena and Sayumi’s graduation. Kanon explains that before, Mizuki and Haruna were the sub-leaders, they had a role together. Now that Mizuki is the leader she will have to have a bigger presence. Kanon thinks that being the leader has kind of a heavy feeling attached to it, as Mizuki will be expected to consult and support the group. But, she mentions that because Haruna is still sub-leader they will work together.

As for Erina becoming sub-leader, she said she was really shocked. Like “No way, Eri-chan?” but she says its not like Erina can’t do it, but sort of like “couldn’t Sayashi or Suzuki do it?” kind of feeling. She says that she thinks Erina will definitely be herself on things like television shows saying things like “You should look at the super cute Erina!” and have that type of character surrounding her. That’s why it was such a surprise to Kanon. However, she thinks that it will probably be OK with the sub-leader position in Erina’s hands as she is actually a very helpful person. She also says that with Mizuki as the new leader and Erina and Haruna as the sub-leaders, Morning Musume will continue on the same, with the 9th generation members on top pulling up the spirits.

Moving on to Yokohama Arena, her first impression was that the stage was huge. After rehearsing on the stage she realized it was even bigger than Budokan. She then mentions that while she was taken aback by how huge the arena was, she also realized it was Sayumi’s last performance and that made her sad. The thought that it would be her last rehearsal with Sayumi made the whole rehearsal sad. She mentions that they showed some of the rehearsal in a VTR during the graduation concert, with them dancing, all wearing Sayumi’s “Usachan” twin tails and the “Michishige Addict” T-shirts. After the rehearsal the tensions were really high and it really felt like “Otsukaresama deshita” (thanks for all the hard work). Then they all danced around with their “usachan” hair. She recalls that it was Maachan who started the Mini Moni Jankenpon! dance, and while she can’t remember why she started doing it, states that it was fun and that she feels like it will be part of Morning Musume history now.

Regarding the graduation ceremony, she states that her tears wouldn’t stop because Sayumi had taught her so much, but also that a new Morning Musume would begin after their performance at Yokohama Arena. She said that lately the ten of them had been making eye contact without saying anything and they could feel their group’s power rise. She says the atmosphere would feel like they really had a bond, and that it was a really wonderful and loving feeling. So, Michishige’s graduation is really sad for her, but that it’s the start of a brand new Morning Musume and they will continue on.

For the next song, it’s Aruiteru as Michishige has often said she really liked the song and they all sang it together with her at Yokohama Arena.

Since this a new program the staff were wondering what type of character Kanon is and if the listeners wanted to know too. So, they asked her a bunch of questions.

She says there are a lot of foods she likes, but that there isn’t enough time to tell you all of them. She says she really likes yakitori, and that she and her father would often go to a yakitori shop after work. She likes eating chicken hearts, gizzards, and tail, but likes the hearts the best. She says she will sometimes have beef tongue too, but she normally only eats the chicken hearts because she loves them so much. She also mentions that she really likes cheese. She says her and S/mileage member Nakanishi Kana went to a cheese shop for the first time together. After cheese, she says she really likes mushrooms. She likes all types of mushrooms and thinks they all taste good. The staff then prompts her to rank her top 3 mushrooms.

3. Nameko. They’re often in miso, and a lot of them particularly in red miso paste. She says her father likes the flavor to be thin in red miso, however. She says that it’s common to eat them with the miso in Aichi and that it’s nameko paradise there.
2. Eringi. She was known for liking them a lot in middle school, and had a cell phone strap with an eringi on it. She says she likes to eat them in her teppanyaki.
1. Shiitake. She says she likes them because they are typically in Japanese food, which she likes. She also likes that they have a piercing flavor. Kanon mentions that when they are in her bento she will save them for last.

She goes on to say that while she ranked her top three, she really does love all mushrooms.

Who is your best friend within Morning Musume?

She says this is a very difficult question because everyone is good friends with each other in the group, especially within the 10 member lineup. She says the person she will most likely go play with is Sakura and they often decide to go places together. When work is done, they will look at each other and say “Curry rice, right?” and go to a Curry shop together. There they’ll talk about work and then go to a convenience store and buy tea, then go to the park and sit on a bench and talk about various things. They’ll talk about school and stuff. But as for a number one friend, she doesn’t know.

And to end Itsudemo! Kannon Smile, she says she was really nervous for the first time, but hopes to continue the show with a smile. 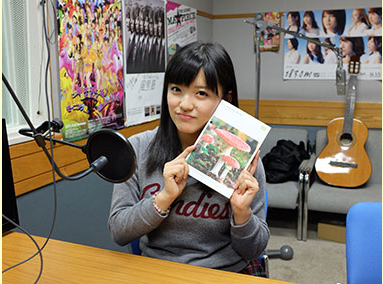