Momoko announces that October 11th is Wink Day! Get a pen and paper ready. First, write the numeral ’10’, and then the numeral ’11’ below it, then turn the paper sideways. The first digits are the eyebrows, and the second digits become the eyes. Add more facial features, and you’ll get a winking face! 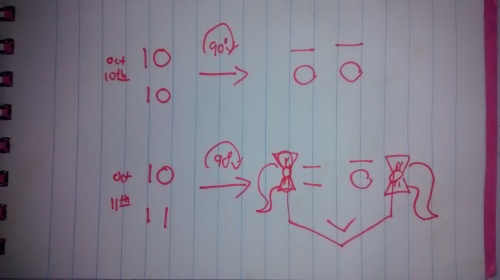 Airi points out that it was difficult to explain via radio, and praises Momoko for the good explanation. Momoko then adds that she has something interesting to share about the day, particularly for girls – ‘On this day, when you wake up in the morning, if you wink a number of times equal to the number of (Japanese) letters in your crush’s name, your feelings will be conveyed‘.

Airi notes that the message is coming a bit too late, since the morning would be long gone by the time the show would be aired, and you’d have to wait until October the 11th next year to do it. Momoko suggests that it probably would be okay to do on the 10th of November as well, since you’d get the other eye winking (Based on the method outlined above). So, try it out on the 10th of November, and your feelings will be conveyed (Airi: ‘We’re just declaring that of our own accord, eh?‘).

Momoko: So for Na-Tsu-Ya-Ki Mi-Ya-Bi, I’d have to wink seven times, the moment I get up. So for Takenouchi Gonzaburou, how many letters would that be?
All: Ta-Ke-No-U-Chi Go-N-Za-Bu-Ro-U.
Momoko: 11 winks, isn’t that a pain.
Airi: It’d build up your eye muscles.
Miyabi: Your eyes would go wonky.

Momoko insists that this is something that’s she heard a lot though, to which the others respond to with an unexcited ‘Is that so?‘

After Momoko reminds people to note the date on their calendar, Airi gives a friendly reminder that the proper date would be the 11th of October. Momoko admits that the alternative date was something that they’d arbitrarily come up with, and she takes no responsibility.

Discussion topic: Your recommendations on how to enjoy (high school) cultural festivals.

The girls start counting how many years it’s been since they finished high school – a mere 2 years for Airi, 4 years for Miyabi, and 5 for Momoko. Miyabi hadn’t expected that so much time had passed.  Momoko notes that idols do get invitations to perform as guests at high school festivals. The girls find those kind of events fun, and they receive extremely warm welcomes at such events.

Airi asks if they go around buying things as well. Momoko replies that they don’t really get the chance to, as they’re usually forbidden to go outside. Airi tells them about this one time, just this one single time, where ℃-ute went out, well-disguised, and had a great time.

Momoko then brings up a story about a festival that Berryz Kobo were invited to, which had fans who weren’t from the university in attendance as well. On that occasion, there was a stall selling a snack called ‘imomochi’, which sold well with the fans. With ‘Momochi’ in its name, the fans probably felt some affiliation, and it sold out. She recalls that when she was in high school, she noticed that products would sell better if they incorporated the names of the invited guest artistes. Mentioning it now, she not taking advantage of that knowledge.

Airi then talks about her experience selling cucumbers in senior high. Her class was selling lightly pickled cucumbers with miso mayonnaise at 100 yen apiece. The others get pretty surprised at how highly priced they were (Airi: ‘Thinking about it now, it seems kind of sneaky‘). But they sold well, netting them about 70,000 yen (Momoko:’You don’t need to be so upfront about the earnings!‘ Miyabi: ‘But still, it’s amazing‘). It took two days, and stunk up the classroom with the smell of cucumbers. The discussion then shifted briefly to the price of cucumbers.

The Buono! girls find these sorts of activities nostalgic, and wish that they could do them again. Airi points out that Buono!’s discography has a lot of songs that would fit in a school setting. ‘Rock no Kamisama’ itself is about performing at a school festival. Miyabi wishes that they could have a Buono! cultural festival. The girls agree, and request for the kindness of the company.

Situation: 21 year old male university student who was on cloud nine when he contacted a girl he had a crush on LINE… but when he asked her out for a meal, he didn’t get a reply at all. He had used simple words, on the lines of ‘Please tell me what days you’re free‘, nothing dodgy. He has no idea what’s the proper way to proceed, and what he should avoid doing. If he doesn’t get a reply after a week, he intends to give up and look for a new love. But is this situation really all right?

Momoko points out that LINE lets you know if the other party has read the message. The girls agree that it’s a useful function in general, particularly for work – but there are times when that function comes back to bite you. Coming back to the listener, perhaps the girl he was contacting saw it but thought that she’d answer it later.

Momoko proposes that if she really wasn’t interested, she’d just reply with an ‘Okay!‘ and place a stamp, and that’d be it, right? Right? Miyabi says that it could be taken either way, and Airi warns that it’d still be an unclear reply. Miyabi points out that it’d be like saying that she got it, and was thinking about it.

Airi suggests that perhaps she saw it and forgot to reply, or it got lost in a sea of communication with others. So he shouldn’t give up just yet, and should try dropping her another line, like ‘What are you up to this week?‘ Then she might just respond by telling him that she forgot to reply to the earlier message. If that gets read without a response, then he should probably give up.

Airi also warns that he shouldn’t send too many. If it’s all a one-sided  ‘How are you doing?’, ‘It’s been a while’, ‘How are you doing?’, ‘What are you up to?’, it might irritate her enough to put him on her ignore list. Miyabi notes that you wouldn’t know if you got blocked – except that the messages would also be marked as unread. So a one-sided conversation might just end up being blocked, and the communication would end up never being seen.

While Airi and Miyabi seem to be well versed in LINE and how the system acts when you’re being blocked, Momoko is taken aback at these revelations. Airi mentions that if the only way he has to contact her is through LINE, then getting blocked means that there’s no moving forward.

Momoko: But at any rate, although we were talking about it from a negative viewpoint, we’re cheering you on.
Miyabi: We’re rooting for you, of course.
Airi: You should try contacting her again.
Momoko: And so, good luck.
Airi: Try to look for a cute stamp.
Momoko: That’s right. It’ll tickle a girls’ heart.
Miyabi & Airi: Yup yup yup.
Momoko: Find a stamp. First, don’t give up, and do your best.

From the announcements segment, Miyabi talks about ‘Towa no Uta’:

Miyabi: ‘Towa no Uta’ is a really cheerful song, it’s a song that oozes Berryz-ness. The outfits are cool yet cute, very school-ish.
Momoko: It’s youthful. There are hints of youthfulness.
Miyabi: Yup yup yup. Even the choreography leaks out a bit of youthfulness.
Momoko: Also, we also act in unison, as one piece. It’s a show of camaraderie.
Miyabi: It lets us show our camaraderie.
Airi: Oh, the popular comic?
Momoko: Yes, there’s this sense of being one piece. In the choreography. At the chorus.

As for ‘Romance wo Katatte’, Miyabi asks Momoko to explain – ‘How is it, Momo-san?’. Momoko seems a bit surprised that the ball is suddenly in her court (Momoko: ‘Eh? Romance wo Katatte?‘). She explains that they’re decked in white, no, silver outfits, and they’re conveying the romance. It’s refreshing, it’ll make your heart go all aflutter, and it’s also cute. Miyabi adds that part of the choreography has them forming a heart shape (Miyabi: ‘It’ll be like “The heck, are you guys trying to pull off being cute?“‘). But the seven of them work together to form a heart, which is rare for Berryz. 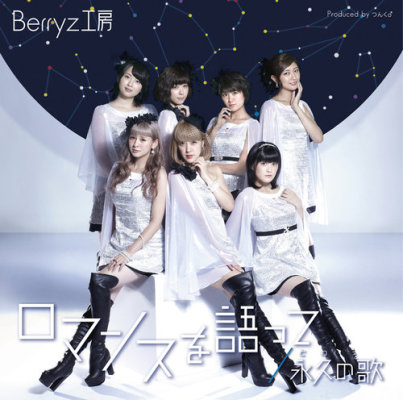 ‘The heck, are you guys trying to pull off being cute?’