The opening word this time is adult, courtesy of Sayubee. She says that she chose it because she wants to become more of an adult this year, which she says all the time but now she really means it.

Sayubee: I’m 17, so I think now I have to grow up… eventually… like in my makeup and stuff and… Why are you laughing?!

Yuka says that she’s conscious of this, too, and a while ago put forth more of an effort to act more mature. She recommends Sayubee pay more attention to the way she walks, the way she talks, and what she insists on carrying around with her. Sayubee says she’ll try. 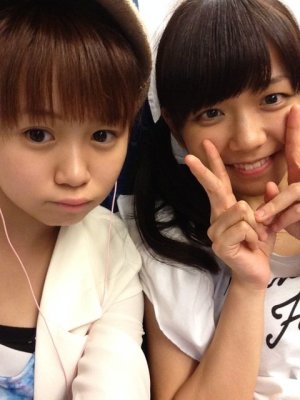 This letter comes from Kasutabe and they’re writing to say how much they enjoyed Uemu’s last voice blog. They thought it was really funny and cute and they would like to hear another one for a different song. Of course, Uemu is not on this broadcast, so they will have to wait until next time to see if she does it. Yuka wasn’t present for that particular recording but she had heard about it from the staff members and eventually had Uemu do it for her, and she thought it was really funny. She says that she and Karin and Uemu have had some practice recently in doing those sorts of introductions at events, but Sayubee had some trouble recently. She was supposed to be an announcer of sorts for a fashion show and she said she had a really difficult time with it. Yuka thinks that perhaps they should all practice like Uemu on the radio show. Sayubee sounds… less enthusiastic.

On their solo tour, the girls all receive local varieties of juice wherever they go. One funny thing about this that Yuka has noticed is that most of the time they get cider instead of juice. A variety that stuck out to her in particular was in Kyoto, where they received yatsuhashi-flavored cider. She was surprised by how much it tasted like yatsuhashi and thinks that people who like yatsuhashi will really enjoy it. Something else that they’ve started doing on their tour stops is all 5 of them going out to eat udon. Kagawa prefecture had particularly delicious udon, but Yuka remembers her struggling during that particular meal. Traditionally in Japanese culture when eating a group meal like hotpot or yakiniku, the person with the highest rank is responsible for dishing out the food to everyone. Yuka is both the oldest and the leader, so she assumed this responsibility, but she had never actually done it before. She just copied what she had seen staff members doing before but she really didn’t know what she was doing. Also, Tomoko started eating the cabbage meant for the hotpot by herself, raw. When they got the various vegetables and ingredients to put into it, they all said they wanted to put everything in, and then they look over and Tomoko is scarfing down the cabbage raw so it didn’t make it into the pot. Yuka assures us that it was fun, though. It was interesting seeing how everyone ate the hotpot. Karin, for example, would tend to take the things that floated to the top more often than not and Uemu would add things to the pot under the pretext that they were for herself.

They’re also performing on the Hello!Con circuit alongside their solo tour. Sayubee takes this as an opportunity to watch her senpai as they practice and perform, and it really makes her think about how aware they are of their surroundings yet how nice they are to everyone. She remembers at rehearsals she was getting some help with the dances from Hagiwara Mai and Okai Chisato and they took the trouble to stay afterwards and help her out. Things like that make her want to work harder. Yuka says she just enjoys watching their performances and highly recommends that we all pay attention to a certain song featuring Shimizu Saki and Tokunaga Chinami, as it’s very cute.

Voice Blog
I love YOU trying hard! by Takagi Sayuki

First of all, by YOU, Sayubee does not mean you, she means herself. Yes, she likes herself when she’s trying hard. It makes her the happiest. Speaking of which, that reminds her that lately her key phrase has been “love-happy,” which she says whenever she needs to put herself into a good mood. The love part is because she has so much love for everyone, and saying it out loud increases her capacity to love other people and that’s fun. The happy part is because whenever you say happy, you become happy. She doesn’t think that anyone can say happy and not be happy afterwards. She wants everyone to try saying this to themselves on days when they are bored because it will encourage them and make everything better. Yuka is unsure of this since she’s not sure there’s anything that can make someone happy automatically, but she will try it.

Yuka ends the show with “in my bag.” The staff member who wrote the blog for this show does not know why she chose this. Apparently there is something in her bag that she is referring to, but they have no idea what it could be. She usually has a rather large purse with her, so maybe it’s leftover goods from work? Maybe? They’re not really sure; they’ll have to ask her later because they are honestly not sure what it is that is in her bag. 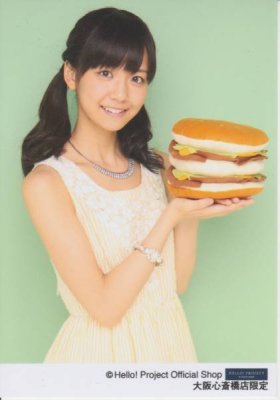 Could this stuffed hamburger be in her bag? Nobody knows!