Kudo starts examining Suzuki’s birthday cake and Suzuki, surprised, goes “What?! What does it say?!” They read it to find that it’s just the usual “Happy Birthday Kanon!” and Suzuki sighs a breath of relief — she still remembers her birthday last year when they brought out a cake to her at an event and on closer look she noticed it actually said “do some monomane, Kanon!“

Song: Morning Musume – One Two Three (for real this time) 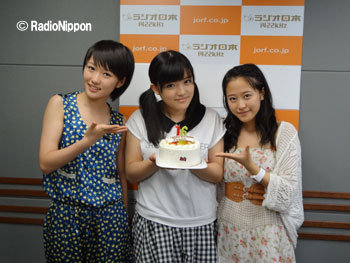 The listener talks about their Mezamashi Live last month and how it was the last one for their leader. He mentions how the event happened to fall on the same date as Michishige-san’s debut single “Shabondama” was released and how the audience got really fired up when yelling the “aisuru hito wa Sayumi dake!” part. The listener asks how this year’s Mezamashi Live compared to last year’s.

Suzuki asks Love-chan to share her opinion first, who says that first and foremost, her neck just got really sore. She as well as Oda both say theirs are still sore even though it’s been well over a week since then… until Suzuki tells them to just tell the truth: they’re actually recording this show on July 31st, just a day after Mezamashi Live.

Compared to last year, this year’s Mezamashi Live was a lot cooler — perhaps due to the larger ceiling and the fans they had lined up behind them. But the performance itself, they say, might’ve been even hotter. Before the encore and its first song “Shabondama,” Oda promised Michishige-san she’d be singing the “aisuru hito wa Sayumi dake” in her mind with the fans, but before she’d even noticed it, she actually sang it out loud during the performance. Kudo says she did, too. They all agree that the fans’ “Sayumi dake” was so loud that it sounded like even Michishige-san herself was singing it like that.

As for the other songs they performed, they all had a hard time remembering how to do songs like Wakuteka Take a Chance since it’d been such a long time since they last performed it in full. That made Kudo realize how the new members have actually released quite a lot of singles with the group so far. “For the Kyuukies, this latest one must be their 11th or 12th one already,” she remembers. Oda spends about 20 seconds trying to remember the singles the Kyuukies have taken part in before she gives up.

Fan letter #2: The second letter is from pen name “Blackberry.”

The listener is currently preparing to take his university entrance exams, but his problem is that his studies aren’t progressing at all since he’s having so much trouble concentrating — he says he quite honestly feels “bored like a Maa-chan stuck in TV program filming session that just goes on and on and on.” (Kudo compliments the listener on understanding Maa-chan so well.) The listener asks if the three have any advice as to what you should do in times you need to be able to concentrate.

Suzuki thinks it’s different for everyone. She personally leaves the room, gets some fresh air, and drinks something really cold. If that doesn’t help in making her brain feel refreshed, she just goes to sleep. Kudo says that she can concentrate the best at night time, and lately she’s also constantly listening to “Love Live!” songs. Oda remembers her teacher once telling her that for things you need to memorize, it’s best to do so at night, but for math, it’s best to do it in the morning right after waking up.

Another thing she was told is to try listening to the same song over and over again only when learning something, and then listening to it again just before your exam — this is supposed to apparently really help your brain remember. Oda explains this concept in some more detail, and Kudo and Suzuki think it’s such an amazing idea, they become speechless for a second before they excitedly start telling Blackberry-san that this, this is what he should be doing!

Kudo: Nakajima-san, any plans to cut your hair short in the near future?
Oda: Huh?! Nakajima-san with short hair…?! 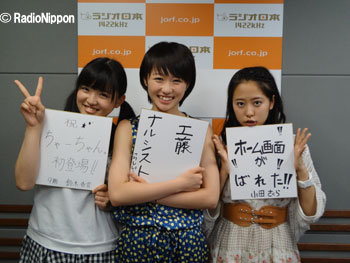 Henkka: The signs in the above picture:

Suzuki: “Chaa-chan’s first appearance!” I’m guessing this is in reference to how she brought her teddy bear Chaa-chan (that she’s had since she was 4 years old) on stage at her birthday event. 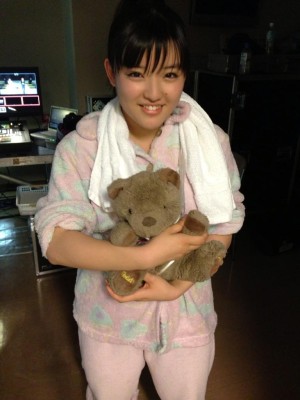 Oda: “My home screen image was found out!” See below tweet.