Ogata thinks that they should just blurt it out and say it, but Maria wants them to do it with good timing. Though she does wonder what the best timing for something like that is… Probably not before they go… Ogata is pretty sure that the day before they go she’ll be way too excited and just end up saying it without thinking. Maria tells her to try her best and to “Shhhhhh”. Her thoughts are that if they end up talking about it before they go, to the other 12th Generation members, Akane at least will immediately go “I’ll go too!”

They continue wondering how they’re going to tell the others… They feel like the other two are going to be pretty upset with them and how unfair it is.

Ogata randomly changes the subject then to the fact that lately they’ve been getting a lot of hand-me-downs from their senpai and that they’ve also been able to talk with them a lot more lately (I assume the subject change is a leap of thought from the fact that Ikuta and Fukumura invited them to Disney Sea).

Maria doesn’t let Ogata derail them from the terrifying situation of their fellow generation mates getting angry at them and asks what they should do about souvenirs. Ogata seems taken aback for a moment as if she had forgotten that it’s a Japanese custom to get your co-workers or friends souvenirs, and that it would also be a very good way to smooth over any anger from Nonaka and Akane.

Ogata doesn’t really have any idea what kind of things they could buy for the others at Disney Sea, however. Maria is a Disney theme park master, though, and totally has them covered. 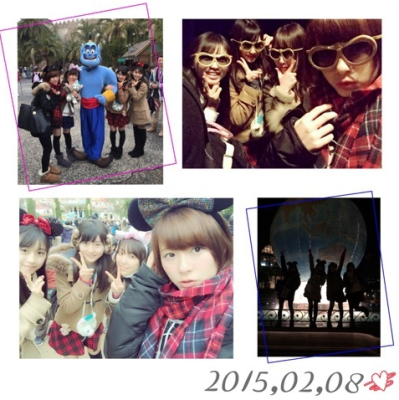 The guilt of sneaking around their generation mates is very apparent.

It’s decided, they will give the other two the souveniers while asking them to forgive them.

“Hello to all the 12th Generation Members! Maria-chan, since your birthday was the other day, Happy Birthday! What was the best present that you got for your 14th Birthday? Please tell us!”

Maria first talks about how her mom decided to take her to Disneyland to eat at Chef Mickey. There Mickey came out, and asked for her to come over, so that they could take a photo together. Thus that day Maria had worn Anna’s dress from Frozen, and then had  gone out to eat at a Disney restaurant with her Mom. Ogata wonders jokingly if Maria might not be a little bit too old for that. Maria explains that when she was younger her and her mom used to go to Tokyo Disneyland and Disney Sea constantly. They would go for the whole day, coming back late, and she would be so tired. Apparently, according to her mom, they did this even when she was as young as three years old.

After Maria winds down on her own answer, she continues reading the rest of the mail.

“Ogata-chan, Happy Birthday! So today is Ogata’s birthday. What is the gift that’s made you the happiest?”

Ogata answers saying that before now, her mom would buy her new skating related gear every year for her birthday. Now, however, Ogata obviously, not skating anymore, doesn’t need stuff like that anymore, so she got a wallet instead. A very cute wallet.

Ogata: Of course I still haven’t gotten anything from Maria-chan yet…
Maria: I’m still working on it! I’ll get it to you soon.
Ogata: Yay! I’m excited.

“Hello to the 12th Generation Members! I listen to the show every week. Good work on all the Hello! Project concerts! Have you gotten used to them yet? My question is, which member to you want to get on the show the most?”

Ogata’s answer is not surprisingly, Sayashi-san. Her reasoning, however, is explained not just because she loves her, but also because 12Ki Nikki’s time slot used to be Riho Deli’s time slot.

Maria’s is of course her beloved Hagiwara-san. She really wants to talk to her about all sorts of things-

(Jump edit to our surprise guest being given a microphone.)

Maria welcomes us back after having been taken completely by surprise by the sudden appearance at their recording. Maria is so taken aback that she has trouble introducing our guest, Satou Masaki.

Both of our 12th Generation members are now thoroughly shaken and nervous about their senpai suddenly being there. 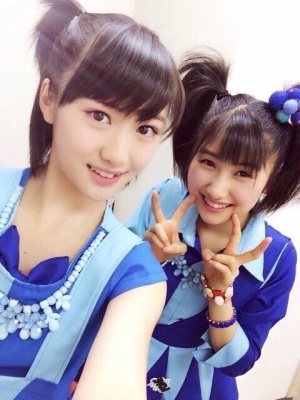 The ever unpredictable Maachan.

Masaki explains that since she was doing some work anyway and was in the neighborhood, that it was decided that she could go ahead and pop in.

Masaki then takes charge asking for their previous answers one more time.

This answer, probably because Masaki does love Hagiwara Mai as well, instead of making her play-angry, just makes her curious. She inquires further and Maria explains that although Michishige is her number one, she’s really liked Hagiwara since her days in Kirarin Revolution. Masaki thinks this is great and recommends that she really should try and get her on the show, her and Haya…yai-san? (….Sayashi?)

Masaki: So… soon your first Morning Musume tour is going to be starting.
Ogata & Maria: Yes.
Masaki: That means… any day now… REHEARSALS ARE GONNA START!!
Ogata & Maria: AHHHH.
Masaki: Amazing, huh.
Masaki: Our instructors are probably going to get pissed off at me as well.. so… let’s try our hardest!

Masaki starts to end her sudden pop-in by mentioning that she might just surprise them again sometime. She tells them to definitely get her on the show again. Maria politely replies that she’s welcome any time.

(Jump edit to after Masaki’s exit)

Both of them are understandably still shell-shocked by this Maachan Experience. They don’t actually feel like they got to talk to her much at all however, so they’re hoping that she really will come again sometime, but planned so they can talk to her properly.

After summarizing their rather adventurous show they recorded today, they once again go back to how excited they are for their Disney Sea get-together. So excited… in a sneaky-sorta way…

Well we haven’t seen any arguments among the 12th Gen, so hopefully that means the souvenirs and apologies worked.

Maria: I was so surprised that Satou-san suddenly came!!